Warning: It’s Not Supposed To Be This Easy

It’s exhilarating to be a stock investor right now. The market has shrugged off poor economic data, a health pandemic, protests, riots, a contentious presidential election, and continues marching higher.

Every morning we wake up and the balance in our brokerage or retirement account keeps climbing.

Let’s take a brief overview at what has happened so far.

The year started off good. It seemed that the bull market would continue for another year. But then the coronavirus hit and abruptly halted the decade-long bull market.

We had the fastest bear market in history when the S&P 500 plunged roughly 30% in just four weeks.

The economy came to a screeching halt. Unemployment soared double digits. Folks were hoarding toilet paper and paper towels and hunkering down in their homes.

But it never came. Sure, stocks tumbled quickly, but in a head-scratching move, they’ve rebounded just as fast (despite being in a recession). 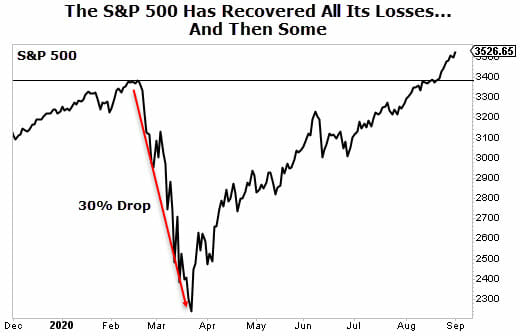 Welcome To The Party

Just as confusing are which stocks have led the rebound.

For instance, consumer cyclicals are goods that folks typically pass up on during tough times. But those stocks have climbed nearly as fast as the surging tech industry (it’s the second best-performing sector behind tech).

For instance, over at Top Stock Advisor, we owned recreational vehicle manufacturer Thor Industries (NYSE: THO).

I recommended it last April, as it was a dominant player in its industry and was trading at a discount. By the end of 2019, we were up a respectable 13% on the investment — beating the S&P 500’s performance by three percentage points.

But then shares crashed fast and hard in March along with the overall market. But just two months after shares bottomed, the stock fully recovered… and then kept ripping higher. 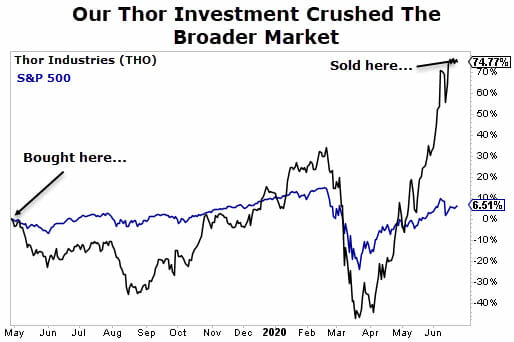 It was a similar story with Corning (NYSE: GLW). We owned the stock for less than four months, and the stock soared roughly 50%.

Now, I’m not going to complain, but it’s not supposed to be that easy.

As much as I am thrilled to book a 75% winner (like with THO) in barely over a year, I keep telling myself that it’s not supposed to be like that. Despite the wild ride it took to get there, it isn’t supposed to be that “easy.”

I expected Thor to be an investment that would provide us with market-beating gains. But I can’t honestly say, I was not anticipating the stock to return 75% return in 14 months.

Time For A Reality Check

Understand that the massive moves in many stocks that we’re seeing isn’t normal. Don’t expect to consistently book 50%, 75%, or 100% gains in months or even in a year.

As investors, it’s easy to get caught up in the euphoria of the market. When we see how quickly our stocks climb and how “easy” the money that comes along with that, it triggers an emotional switch in us. We become greedy, and we become anchored to the highs that are reflected in our brokerage or retirement accounts. We then have a hard time cutting losses and/or booking gains until it’s too late. Until most of our gains have plummeted back to earth.

It’s this emotional tug of war that makes investing in the market so rewarding and frustrating.

But at the end of the day, we need to keep our expectations and emotions in check. Understand that we are in unprecedented times and that it won’t always be this “easy” to make money in the market.

I’m not saying it is time to jump off the bandwagon altogether. Maybe cash in some chips, and start looking for stocks that are undervalued right now. You don’t even have to be the first one to leave the party, you just don’t want to be the last one.

This is the approach that I’m personally taking right now. I’ve pulled some profits off the table and am beginning to look for other investment opportunities that are more sensible to me.

Since the market’s stomach-churning drop in March, it’s been an extremely fun — and confusing — market. But like with anything in life, when money comes this easily and quickly, I become weary. I tamper my expectations. And while I’m still enjoying the party, I try and take a more contrarian point of view. I look for investments that aren’t in favor but still dominate their market and have wonderful enduring businesses.

They may not be “sexy,” and they might be “boring” businesses. But that’s okay. Boring can help you grow your wealth while allowing you to rest easy at night.

For example, I found a little-known tech stock that’s involved in several massive tech trends: the Internet of Things, satellite technology, 5G, communication, you name it… And the good news is that right now it’s completely unnoticed by the market, which means it’s the perfect setup to make investors a lot of money in the coming months.

Go here to learn all about it in my latest report.