Why You Shouldn’t Write Off Energy Just Yet…

How the mighty have fallen.

A decade ago, it was the world’s most valuable corporation, with a market cap near $400 billion. Today, having shrunk just $166 billion, it doesn’t even crack the top 25 — let alone go toe-to-toe with $2 trillion heavyweights like Apple. And now, this former No. 1 is being coldly tossed out of the Dow Jones Industrials.

I’m talking about ExxonMobil (NYSE: XOM), one of the world’s most widely-held stocks. Exxon has been a fixture in the Dow since the 1920s when it was still known as Standard Oil of New Jersey. After nearly a century, the integrated energy giant is being pushed aside in favor of Salesforce (NYSE: CRM).

I suppose it’s fitting that Exxon is being replaced by a software company. There’s the fact that XOM shares at $40 had a diminished impact on the price-weighted Dow compared to CRM’s $270 sticker. But this decision is symbolic of a much larger shift taking place.

In a nutshell, the energy sector isn’t what it used to be. Between fears that crude demand may have peaked and the rising backlash from environmental advocates, this group has lost clout with investors (both retail and institutional).

Perhaps seeing the changing winds, BP (NYSE: BP) has vowed to trim oil and gas output by 40% over the next ten years and pivot into renewable power. The world’s sixth-largest oil producer is cutting back on new exploration and will instead invest up to $5 billion annually on wind and solar projects. It got the market’s attention – the shares rallied more than 7% on the news, shrugging off a quarterly loss.

Still, energy stocks, once a mainstay in most portfolios, are becoming irrelevant in the eyes of some. The entire sector now has a negligible 2.5% weighting in the S&P 500. No, that’s not a typo. Meanwhile, Salesforce and its tech brethren account for nearly 30% of the index.

Let me put that in perspective. The utilities, energy, real estate, and consumer staples groups (well-tread ground for dividend hunters) account for just 16% combined. That means tech has twice as loud a voice as these four sectors put together.

When I first entered the investment business in the late 1990s, tech stocks represented less than 15% of the market. I watched that percentage double to 30% in early 2000 as investors piled money into popular highfliers hand over fist. You know what happened next: the dotcom crash brought them back down to Earth.

I’m seeing similar behavior today, with investors chasing momentum wherever they can find it with little regard to price. There are businesses out there with stratospheric valuations of $30 to $40 billion that haven’t yet made the first dollar of profit. That’s what former Fed chief Alan Greenspan would call “irrational exuberance”.

Only the names have changed. But I digress.

When you read that the S&P just enjoyed its best August since 1984, take that with a grain of salt. It means that tech stocks — particularly those in the stay-at-home economy like Zoom Video (Nasdaq: ZM) — had a great month, propelling the index to new record highs.

Meanwhile, the tried-and-true utilities sector (XLU) is down about 6% for the year. The real estate group (XLRE) has lost 4.5%. Banks and other financial stocks (XLF) have really struggled, retreating more than 17%. Entire swathes of the market have been left behind. In fact, they have lost ground in 2020. 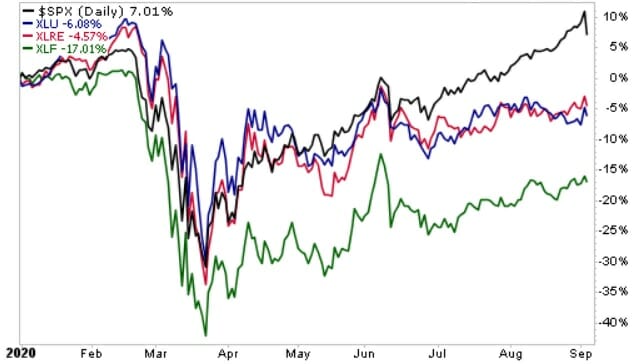 Unfortunately, these sectors are also home to many of the most generous dividend payers.

I tend to be leery of narrow market leadership, as it often foreshadows market corrections. Without naming names, the five largest stocks account for more than 20% of the market, exceeding the former high of 18%.

Care to guess when that occurred?

March 2000, just before the last big tech crash. Poor market breadth also signaled downturns in 1990 and 2008. I’m not saying we’re headed for an imminent repeat (the world looks much different today than it did back then), but the situation certainly bears watching.

Meanwhile, natural gas prices have also spiked higher lately. That’s a welcome relief for our holdings over at High-Yield Investing.

In the meantime, if want to know about my absolute favorite high-yield picks, then I invite you to check out my latest report right here.