When you boil it down, the choices we make when it comes to investing are fascinating. After all, when we buy or sell shares of a company, someone must be on the other side of the transaction. Why are they selling/buying those shares? What do they know that you don’t? Or vise versa?

Once you enter an investment, the true roller coaster ride begins. If an investment soars, you’re elated… but should you take profits? If so, why? On the flip side, if an investment goes against you, at what point do you cut your losses?

And think about the conversations we have with other investors. Some stocks immediately elicit a reaction. For instance, the popular electric car manufacturer Tesla (Nasdaq: TSLA) provokes strong emotions out of a lot of investors. Folks, either love it or hate it…

The same is true with many other stocks. For example, some people won’t touch “sin” stocks or those associated with vice, like cigarette-makers Altria (NYSE: MO) and Philip Morris (NYSE: PM), or alcohol companies like Constellation Brands (NYSE: STZ) and Diageo (NYSE: DEO). The same goes for gun stocks, gambling companies, and adult entertainment firms.

You Have To Remove Your Bias

Of course, if you’re simply looking at the business side of things (take some of the emotion out of it) you start to notice just how profitable some of these businesses truly are. And in certain times, you can leverage the biases or beliefs other people have about these industries and produce outsized returns by snagging some of these companies at a discount.

But regardless of whether we try and remain as open-minded, or neutral, as possible when it comes to investing, we all have prejudices regarding some stocks. These preconceived beliefs can often blind you to what could turn out to be a great investment.

Consider my most recent recommendation over at Top Stock Advisor. When this company went public last year, I strongly disliked it. I thought it had a terrible product — although I hadn’t tried it. I thought it was just a fad. I thought the company would eventually fizzle out and go bankrupt.

Again, these were all preconceived notions. They were coming from emotion rather than a neutral viewpoint.

Perhaps I immediately didn’t like this company because it “threatened” an industry that I grew up with. That industry (ranching), after all, is a major economic driver in my small community. Or maybe it’s because it competes with a product that I love and consume on a regular basis (meat).

But this month, I set aside my natural disdain for this burgeoning industry. I decided to take a deep dive into the market leader of plant-based meats. If you’re willing to remove any biases you might have, you’ll likely see what I did… That this could turn out to be a highly lucrative market.

The Next Huge, Highly-Profitable Market

The global retail meat market is massive, $1.4 trillion to be exact. In the United Sates the meat market is worth about $270 billion. In short, the total addressable market, or “TAM” is massive for plant-based meats.

This industry is still in its infancy. It’s expected to grow at a compounded average annual rate of 15% from 2019 to 2025, according to industry research firm Markets and Markets. In 2019, plant-based meats racked up sales of just $940 million. That’s less than 1% of total U.S. meat retail sales. But that’s a robust 37.8% growth over 2017 sales.

I believe plant-based meat will follow a similar pattern as another industry. Like plant-based meat, it was often ridiculed when it first came to market. I’m talking about the non-dairy milk market (soy, nut, oat, and coconut milks).

The Blueprint For Growth 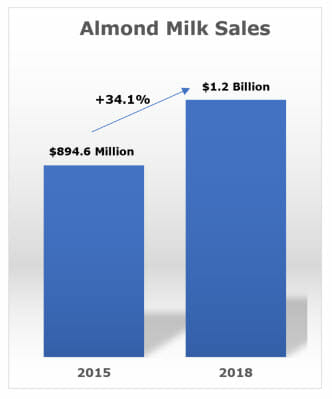 I remember when coconut milk (and other plant-based milks) were in their infancy. As a devoted cow-milk drinker, I couldn’t grasp why someone would want to drink coconut milk. It didn’t even taste close to regular milk (same goes for all the other non-dairy milk products).

In those early days, these plant-based milks were often mocked and ridiculed. Many (including myself) thought it was just a craze that would pass with time. But sure enough, it started gaining steam with a broader audience…

(including mine). Today, the non-dairy milk market accounts for about 14% of total milk industry sales in the United States, and it continues to gnaw away market share from traditional cow’s milk.

The plant-based milk market has grown at a compounded average growth rate of around 16% over the last five years. But in its earlier years, sales grew even more rapidly.

But this provides a blueprint for the plant-based meat market to follow. And if it history is any guide, then it’s set to be a huge, highly profitable market.

As I mentioned earlier, there is a pure-play stock that we can buy to take advantage of this burgeoning industry. But I won’t mention it today out of fairness to my premium readers. My goal is simply to convince you of the importance of recognizing your own biases — and looking beyond them for profitable investing ideas. If you’re able to do this, you’ll far ahead of the average investor.

If you’re looking another “home-run” stock that could take your portfolio to the next level, then you’ll want to check this out…

I’ve found a little-known tech stock that’s involved in several massive tech trends: the Internet of Things, satellite technology, 5G, communication, you name it… And the good news is that right now it’s completely unnoticed by the market, which means it’s the perfect setup to make investors a lot of money in the coming months.

Go here to learn all about it in my latest report.