Why I’m Not Worried About Elon Musk’s Latest Venture… 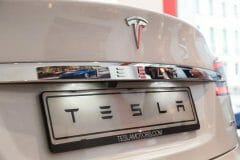 And no, I’m not referring to a new electric vehicle model. It’s not a new space project, either.

According to Musk, Tesla (Nasdaq: TSLA) is getting in the mining business.

Lithium mining, to be exact.

On the surface, the reasoning is pretty clear. Musk, Tesla’s CEO and founder, said its entry into the lithium mining space is part of a goal of better controlling costs. Its lithium batteries are a massive expense in the build of its electric vehicles.

Musk said that Tesla has new lithium extraction methods that the automaker believes will reduce its lithium costs by as much as a third. It also announced it had secured rights to 10,000 acres in Nevada where it will produce lithium from clay deposits using its own proprietary technique.

I am not a mining expert, but I do know that to start a mine you face a number of challenges… especially if you’re mining using a method that’s been developed internally, as in the case of Tesla. You have the permitting process, you have to provide sensitivity analysis regarding the potential impact on the environment and groundwater. There are feasibility studies… water rights… the list goes on.

If you make it past these obstacles (which can take years to do), then you have to begin the development of the mining site (roads, power, utilities, buildings, etc.).

In short, the costs are massive before you even produce a single ounce of lithium. And it’s not like Tesla produces a bundle of free cash flow that it can use to pay for these costs. In fact, last year was the first year it produced any positive free cash flow.

Now, I’m not one to question Elon Musk outright. But if he’s right, it will likely be years before Tesla sees the fruit of that labor.

The Better Bet For Lithium

But here’s the thing… I am bullish on lithium and lithium mining. The metal has a whole host of applications, aside from electric cars. But, of course, electric cars are the big catalyst. In fact, I think lithium will be one of the single most important metals of this decade (and beyond).

That’s why I’m a fan of lithium miner Albemarle (NYSE: ALB). In fact, we’ve owned it in my Top Stock Advisor premium service since late October 2019. And despite a choppy ride, thanks to the Covid-selloff, our position has been looking pretty good.

But things took an unexpected turn when shares tumbled double digits last week on the news from Tesla. 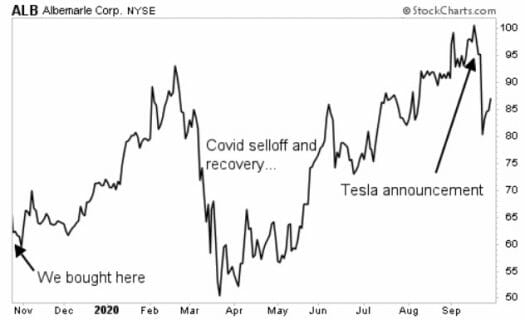 In my opinion, the selloff was overdone. It was an irrational move by investors without thinking through Tesla’s potential move into the mining space.

Also, Albemarle doesn’t rely solely on lithium for revenue. While it did account for 37% of sales last year, the company also gets about a third of sales from its Catalysts division — which provides technologies and related services to the refining and petrochemical industries.

On the lithium side of things, Albemarle is one of the largest lithium miners in the world.

Of course, we don’t want to overlook new entrants into its market. But realistically, it will be extremely tough for Tesla (or any new entrant) to sort through all the regulations and permits required just to even think about mining. So to think Tesla will come in and begin taking any market share away from companies whose sole focus is to mine lithium (and be able to do it cheaper) is magical thinking.

For instance, Lithium Americas (NYSE: LAC) has said it can confidently extract lithium from clay. It also has a lithium project in Nevada and began its process in 2008. The mine is still not up and running.

The bottom line is that I believe the selloff was overdone. I’m not entirely concerned with Tesla’s latest remarks regarding its entry into the lithium mining space. Of course, I’m also not one to bet against Elon Musk. But Tesla will likely realize that it’s better at building electric vehicles than becoming a mining company.

Meanwhile, I expect ALB to recover and push higher.

If you feel like 2020 has brought about a lot of changes, you’re not alone… In fact, my colleague Dr. Stephen Leeb has coined a term for the stock market’s recent behavior. He calls it “Reset 2020”…

The reason? He believes this is the year that signals a paradigm shift in the United States. And it could leave millions of Americans behind if they’re not careful…

To learn more about this shift and how to profit from it, click here for our special report.