When The Market Takes A Breather, Get Excited…

In a recent issue of my new premium service, I expressed a half-hearted desire for a selloff.

Why on earth would I want stocks to take a breather? Colling down the overheated market would put some over-extended stocks back in our grasp, for starters. Nobody (except short-sellers) really loves to see stocks tumble. Still, the occasional correction is sometimes necessary to keep prices in check and prevent bubbles.

Of course, when gravity reasserts itself, it can also bring highfliers back down to Earth. And that’s good news if you’re not an owner of a stock – yet.

Sure enough, just before and after the Labor Day weekend, the market suffered through a short, but volatile downturn. The Nasdaq bore the brunt of the selling pressure, sliding about 10% as many tech leaders succumbed to profit-taking. 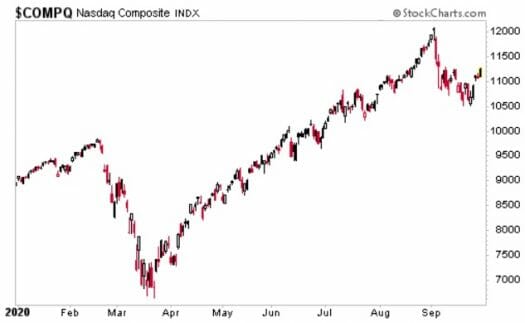 But not this time… Bargain hunters stepped in with resolute buying conviction and the market quickly stabilized. At least for now. Tomorrow is another day.

Which brings me to another point…

Deals Are Down, But Not For Long…

M&A activity in the United States was down by 85% last quarter, according to Refinitiv. Globally, deal-making volume plunged by half (and 70% in dollar terms) to the lowest levels since the 2009 recession.

We knew from the financial headlines (or lack thereof) that big deals have been rather scarce in 2020. Executives have been understandably leery about making bold 10-figure investments in this uncertain environment. Would-be buyers have been more preoccupied with the safety of their employees and getting their own financial houses in order.

Yet, while it’s still eerily quiet out there with regard to takeovers, I believe this lull will prove to be the calm before the storm. I say that for at least four reasons.

1.) Deal-making activity has been booming for well over a decade, surpassing the $3 trillion mark annually for six straight years.

3.) Borrowing rates remain near record lows, and buyers (both public and private) are flush with unprecedented cash stockpiles. Plus, the favored coin of the realm (equity) has appreciated sharply in recent months.

4.) Asset prices remain cheap in many sectors, making it easier for buyers to offer generous premiums.

All we need is a little more cash flow visibility and a dash of confidence.

These are just three of more than a dozen multi-billion dollar deals that have been unveiled in recent weeks. They most certainly won’t be the last.

How I’m Preparing For A Wave Of M&A Deals

In the meantime, the brief pullback was enough to derail several runaway stocks, at least temporarily. One in particular had chugged from $225 on July 1 to $279 on September 2. Then the selloff struck, driving the stock back down to $225 — unwinding all those gains in the span of three days.

For the record, Wall Street analysts have a consensus target price right at the $300 level. That might be a lowball figure given the company’s spectacular growth. Still, it implies a potential upside of more than 30% from here.

And from the point of view of a potential acquirer, the price tag has just been slashed by more than $6.5 billion.

Bottom line, don’t be discouraged if you see the market take a breather like we did just recently. It’s a healthy thing. Potential acquirers salivate at the prospect of getting a good deal at a discount, and you should, too.

Editor’s Note: The middle class is under siege — and not just from the coronavirus. The gap between the haves and the have-nots is getting wider, and major shifts in the economy threaten to leave regular, everyday Americans in the dust.

Those are the conclusions of a new report put together by our investment team. It’s called Reset 2020. This report lays out the right steps to prepare (and profit) now, before it’s too late.