Here’s Why It Pays To Be A Contrarian…

“Close the door,” he said. “I’m about to reveal the secret of how to become rich.”

The man was none other than Warren Buffett. The Oracle himself. You could fill an entire anthology with insightful observations and sage advice that he has shared over the past half-century. But one piece of wisdom stands above all others. Call it the Cliff’s Notes version.

The powerful secret? It’s simply this…

You’ve probably heard this quote before. It’s been repeated countless times over the years. But the logic behind it is timeless.

Go against the grain.
Don’t blindly follow the herd.
In short, be a contrarian.

I’m a proud contrarian myself, shunning popular (and overvalued) stocks in favor of companies that are misunderstood, under-appreciated, or just plain disliked. History proves that the best time to buy an asset is often when nobody else wants it. Be it stocks, bonds, commodities, real estate, or garage sale items.

While potentially lucrative, this strategy usually requires some patience. After all, there’s probably a reason why other investors are staying away. The company (or industry) might be going through a temporary slump, facing balance sheet stress, or dealing with some other issue.

Don’t be afraid to invest in sick or injured companies. You will often find them trading at deep discounts. Yet, illnesses can be cured in time; superficial wounds can be healed. If you’re willing to wait on a recovery, it’s not hard to find $50 stocks selling for $40. Or $30.

Of course, turnarounds seldom happen overnight. I’m generally willing to give companies at least a year to right the ship and get back on course. But sometimes, it happens much sooner than you think.

Take Bank OZK (NYSE: OZK), a small regional lender. When Covid struck, the stock was cut in half from $30 to $15 in a matter of days. At that point, nobody wanted to go near it. To be fair, the near-term outlook was shaky. Net interest margins (NIMs) were thin, and many loans (both commercial and consumer) go sour at the onset of a recession.

Still, the bank’s core strengths were intact. And it has certainly weathered many storms in the past – posting 41 straight years of annual profits without a single loss. With disciplined lending and one of the leanest expense structures in the industry, I saw no reason for this well-run bank (the No. 1 capitalized lender in the nation) to be trading at just half of book value.

So while other investors were running away back in April, I jumped in and bought the stock back for just $18 — about 60 cents on the dollar. Shortly after, the bank posted an increase in deposits, loan volume, and total assets, reassuring jittery investors. Credit quality remained sound, and the bank hiked dividends for the 39th consecutive quarter.

OZK began to rally and quickly went from “don’t touch” to “must-have”. I cashed out my gains near $27 in early-June – pocketing a gain of 50% in just six weeks. 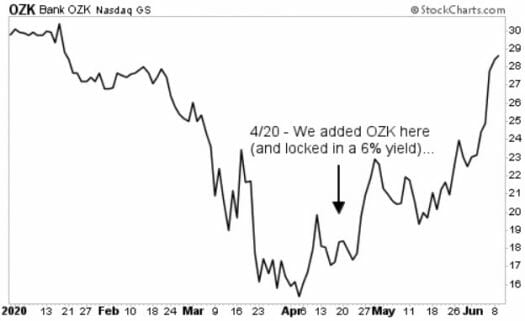 I bring all this up because 2021 is shaping up to be a great year for contrarians. Countless strong businesses have been knocked down, including some of our own portfolio holdings over at High-Yield Investing. We scooped up quite a few names between March and June, and many have already recovered much of what they lost.

I hope you were able to do the same thing. If not, there’s still time. Don’t let the major averages like the Dow and S&P fool you… There are plenty of stocks that still haven’t fully recovered their previous highs.

There are quality companies that are still licking their wounds right now. Most will recover in time. In fact, many of them will follow a similar path as OZK.

But that doesn’t mean you should just plow your money into any stock you find in this market. There’s also a lot of garbage out there that just simply isn’t worth your time (or money).

On the long side, that is…

Last week, my colleague Jim Pearce released a brand-new video presentation where he talked about the troubling conditions that are developing with a handful of well-known stocks.

And according to Jim, they’re ripe for a big-time fall.

When these stocks start plunging, a lot of investors are going to panic. But you don’t have to follow the herd. That’s I urge you to check out his report because you’ll not only know how to protect yourself when these “zombie” stocks have their day of reckoning… but you can even profit from it.

Jim’s presentation will tell you how. Go here to check it out now before it’s too late… 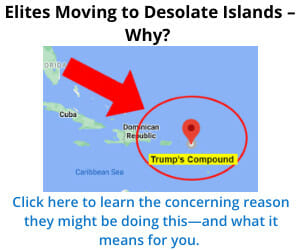