I hope you all had a wonderful and relaxing Thanksgiving. As I’m writing this, snow is settling on the lake and mountains outside of where I live. And after a short break to enjoy family and food, I’m already thinking about the next wave of buys and sells that will take place as we shift into the closing month of this year.

But first, let’s talk about the overall markets for a minute.

The Dow Jones Industrial Average topped the 30,000 mark for the first time in its history on Tuesday, November 24. It’s hard to believe that just eight months ago at the start of the pandemic, it was trading for less than 19,000. 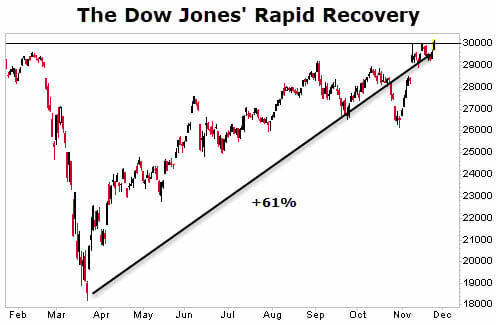 This about-face is remarkable. Fortunately, over at Maximum Profit, we’ve been able to take advantage of this rapid recovery with a majority of our trades. For instance, shares of two of our recent buys popped 26% and 44%, respectively, in the four weeks we held it.

We made money in the rebounding retail sector with two trades, and we took advantage of the roaring tech sector as DocuSign (Nasdaq: DOCU) ripped off a 166% return and Five9 (Nasdaq: FIVN) soared 91%.

What Market Breadth Is Telling Us

We’ve clearly enjoyed — and profited from — the market’s rapid recovery. But as the major indexes continue to reach new highs, many might be wondering how much longer it can last.

Of course, nobody knows for certain. But what I can say is that according to the Advance/Decline Line (AD Line), the market’s rally is healthy.

I’ve talked about the AD Line a number of times in the past. But as a quick refresher, it is a breadth indicator that can reveal the underlying health of the market.

The AD Line tells us how many stocks are rising versus falling. If a market is rallying, we want to know if this rally is being promoted by only a handful of stocks. Ideally, we want to see strong market participation. This means a lot of stocks are pushing the market higher and that the rally is strong and healthy.

But if the market reaches new highs, while the breadth indicator doesn’t, that’s called a bearish divergence. This has historically led to a market pullback.

As you can see in the chart below, the AD line is hitting new highs. This tells us that this is a healthy bull market… 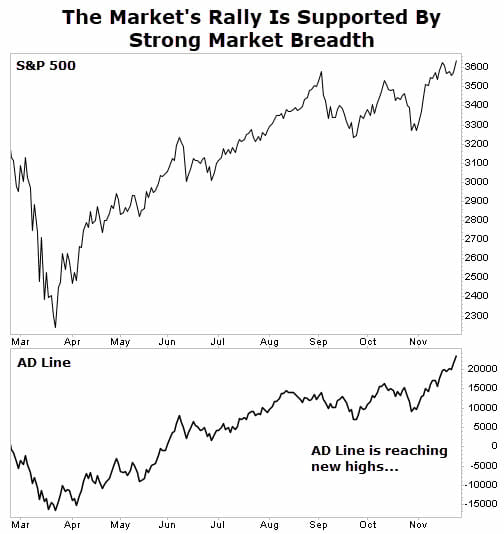 As you can see, the AD Line is surging to new heights along with the broader market. That’s a positive sign that this market rally is strong and can continue.

One thing I do want to point out, however, is that while the Dow Jones and S&P 500 are both hitting new highs, the tech-heavy Nasdaq 100 has continued to trade sideways, and as of this writing, it has yet to break past its most recent high that it set September 2.

There are some interesting takeaways form this. For one, while we are seeing many stocks surge higher, the tech sector, which has been on a tear recently, is struggling to reach new highs.

This shouldn’t be terribly surprising. After all, we’ve seen the momentum from some of our tech stock trades wane as the Maximum Profit system has signaled us to sell.

What’s more, my system is beginning to flag stocks from some surprising sectors. For example, it recently flagged a regional bank stock as a buy, and this week it’s flagged another stock from the worst-performing sector: energy.

This tells me that there are signs of life in the two of 2020’s worst-performing sectors. Investors are beginning to look outside the tech industry for new profitable positions. This makes sense, as some of these sectors have a lot of catching up to do. If that’s the case, then we will position ourselves accordingly over at Maximum Profit. If you follow suit, then you stand a good chance of riding the next wave to more profits.

P.S. It’s possibly one of the largest treasure troves of precious metals ever discovered…

Buried deep in the Arctic Circle, geologists and precious metals experts estimate it’s worth $100 billion or more. And with melting ice caps, it’s finally ready to give up its hidden treasure.

Early investors in this mineral bonanza stand to make a fortune. And we’ve found a small-cap mining stock that’s poised to make explosive gains. To get in on the action, click here for details.