Vaccine News Made This Stock Double. Here’s What To Do Now…

The promise of a COVID-19 vaccine has added fuel to the market rally in the wake of the Presidential election.

The reasoning is pretty simple. What were once considered “distressed” industries in this crisis are now showing signs of life.

I discussed this in a recent article, saying:

Make no mistake, we are not out of the Covid woods just yet. But Pfizer (which itself has enjoyed a nice pop) may be clearing a trail.

In the meantime, I’ll keep repeating what I’ve been saying throughout this year… Don’t let the major market averages fool you. There are still plenty of solid stocks that have only recovered a portion of what they lost during the Covid selloff.

Of course, some of them are not worth touching right now. But there are some real gems to be found, too.

One of those industries with signs of new life is the cinema industry. For example, after languishing in the single-digit range through most of October, Cinemark (NYSE: CNK) has since rallied to near $15 per share.

That’s a powerful surge of 80% since the beginning of November. 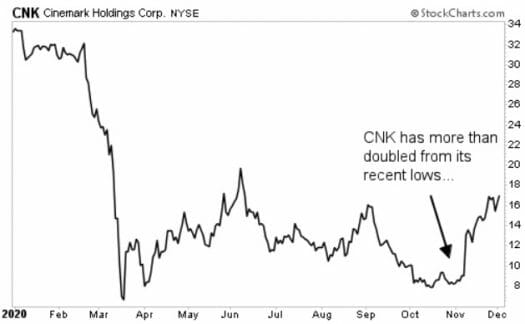 But does this mean CNK is worth a stake now? Is this a sign of more gains to come – or simply a dead cat bounce? Let’s get into the details to find out…

As expected, third-quarter results were abysmal – but showed improvement in several regards. The company welcomed 1.9 million guests to its theatres, who spent $15 million on tickets and another $9 million on popcorn, drinks, and other concessions.

That’s a far cry from revenues of $822 million in the same period last year. But that’s without any help from Hollywood, which has delayed one big release after another until 2021 (most likely when theatres in New York and Los Angeles re-open).

It’s encouraging that nearly 2 million patrons (myself included) visited primarily to watch a library of re-runs. Cinemark is also seeing some success with its watch parties, where private groups can rent out an entire theatre. But revenues won’t pick up meaningfully until the pipeline of new cinematic content begins to normalize.

In the meantime, theatre customers of both Cinemark and rival AMC are reporting overwhelmingly positive feedback scores regarding enhanced safety and sanitation measures – which bodes well. The safer visitors feel, the more readily they will return. It doesn’t hurt that most theatre rows these days were already more than six feet apart.

The only metric that matters right now is cash burn. With 90% of its theatres open, Cinemark is burning through cash at a much slower rate today than it was back in the summer.

But it could be a while before cash flows turn positive. And there is always the risk of a second lockdown, which could be damaging for the stock.

If this is a stock you bought during the summer as part of a lockdown-rebound play — or later in the fall when CNK was near its low, then I think it would be prudent to take advantage of today’s optimism and cash out your gains.

But if you’re thinking about getting in at these levels, then I would suggest entering a protective stop loss. Set this at a level you feel comfortable with — 15%, 20%, 25% — it doesn’t matter as long as you can sleep at night.

Despite the recent rally, there are still “buys” out there. You just have to know where to look. And my High-Yield Investing subscribers and I plan to take full advantage…

To learn more about my service and join thousands of like-minded income investors in the search for opportunities you won’t hear about anywhere else, go here now.