I was sifting through financial twitter, or “Fintwit”, as it’s known, and came across an interesting post. It posed a question along the lines of “what’s your biggest investing/trading mistake?”

As you may know, I’m fascinated by these kinds of questions. I believe that our investing behavior affects our performance much more than people realize. So wanting to see the responses, I clicked to view the comments. I thought I had an idea of what people would say. But honestly, the answers shocked me.

Nearly all the “mistakes” that people posted were along the lines of booking profits too soon or “should have held on to XYZ stock longer”.

I probably shouldn’t have been so surprised by most of the answers that I read, given today’s market environment. After all, letting winners run is a core tenet of my Maximum Profit system. But I couldn’t believe I didn’t read a single person say that one of their biggest mistakes was holding onto a loser too long. Or letting a small loser tumble into a big loser.

I would argue this is the average investor’s biggest pitfall.

The comments I read gives me a good idea of where we are at in this market. After all, everyone is a genius in a bull market. But please, I urge you, don’t fall victim to your own success…

The market and many individual stocks have been outrageously generous. And I have the feeling that many folks are falling victim to what’s known as the Dunning-Kruger effect.

What Is The Dunning-Kruger Effect?

To understand the Dunning-Kruger effect, we need to go back to a couple of bank robberies in the city of Pittsburgh in the spring of 1995. McArthur Wheeler walked into the first bank in the middle of the day, pointed his gun at the teller, and demanded money. The teller obliged gave him the cash, and Wheeler walked out.

Euphoric about his success, he walked into another bank and repeated the process… broad daylight, handgun, and demanded cash.

The most bizarre thing was that Wheeler walked into these banks without a mask.

The bank’s security video surveillance easily captured his face, and he was arrested later that night.

Wheeler was dumbfounded that he had been caught. He told the officers, “But I wore the juice.”

You see, instead of wearing a mask, Wheeler had put lemon juice on his face. He believed it would make him invisible to cameras.

Where did he get this crazy idea? Well, he was aware that lemon juice was used as invisible ink, so he (incorrectly) inferred that it could also be used to make himself invisible to security cameras.

Upon his arrest, Wheeler was tested for intoxication and drugs. But he was clean. He was just incredibly wrong about his assumption that lemon juice would make him invisible.

This bizarre bank robbery went on to form the basis for what has been called the Dunning-Kruger effect, or “DK effect.” In 1999, psychologists, Justin Kruger and David Dunning identified this cognitive bias — using Wheeler’s story as part of its case study. Their paper, entitled “Unskilled and Unaware of It: How Difficulties in Recognizing One’s Own Incompetence Lead to Inflated Self-Assessments” pointed out how people tend to believe their abilities are much higher than they actually are.

In short, this cognitive bias shows that people with low ability at a given task are prone to overestimate their ability at that task.

We’ve all had (or have) that one boss, colleague, or friend who is a “know-it-all” who actually knows very little. They are victims of the DK effect.

Today’s Market Environment Is Creating A Lot Of Fake Geniuses

With the onset of the pandemic and stay-at-home orders about a year ago, folks at home turned their attention to the stock market. The popular trading app Robinhood became the weapon of choice to execute these trades.

You’re new to the stock market, a health pandemic is sweeping the nation, forcing you to stay at home. You read or hear about folks trading stocks, so you open a Robinhood account and get it funded. Let’s say by the time you start trading it is April 1, 2020.

Again, you’re new to the scene. You buy your first stock and it goes up, then goes up some more, and continues to climb. Here’s how some of the most popular stocks on Robinhood have performed since April 1: 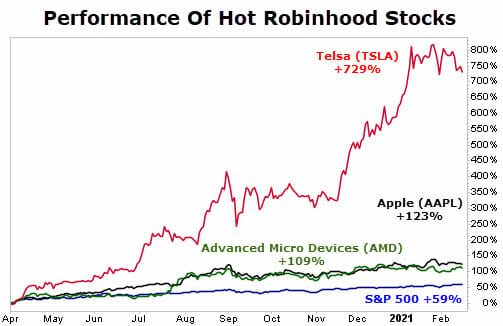 With these sorts of performances, it would be easy to become overconfident in your “investing skills.”

And don’t get me wrong, I am by no means saying these folks aren’t smart, or savvy investors. I’m sure that many will find success in the market over the long haul. But the telling sign will be how these same investors react when they get punched in the mouth. When the markets aren’t on a relentless march higher.

As the popular quip goes, “It ain’t what you don’t know that gets you into trouble. It’s what you know for sure that just ain’t so.”

The next time you catch yourself marveling at your skill at a task, especially investing, remember the Dunning-Kruger effect.

Better yet, develop a system that takes as much of your emotion out of the equation as possible. That’s where my Maximum Profit system comes in…

By having a system working for us, we don’t have to spend countless hours searching for the right stock. The system does that for us. We also don’t have to figure out when to buy and sell. The system takes care of that, too.

And by having two of the most powerful indicators working in our favor, we can feel confident that we’ll come out ahead more often than not. That’s why I say it’s the closest thing you’ll get to legally “hacking” the stock market…

I just released a special report about how we’re going to use our system to “hack” a group of stocks at the forefront of the 5G technological revolution. And if history is any guide, we’re going to make a killing on these stocks in 2021 and beyond…