The World Needs More Of This Metal Every Day. There’s Just One Problem…

Copper has a timeless appeal. The metal has been mined since the days of the ancient Egyptians more than 5,000 years ago to fashion tools and weapons. Later, it was alloyed with tin to usher in the bronze age. Here we are five millennia later, and the metal is more important than ever thanks to its unique properties.

Copper is malleable, ductile, and a great conductor of heat and electricity. It even has natural antimicrobial properties – which is why you see copper doorknobs and other high-touch surfaces.

Just about every home and business contains copper for electrical wiring, plumbing pipes, fittings, and other uses. It takes about 439 pounds of copper to build an average house. And builders are currently on track to break ground on 1.6 million new homes over the next year in the U.S. alone.

To say nothing of large-scale infrastructure and commercial construction projects. 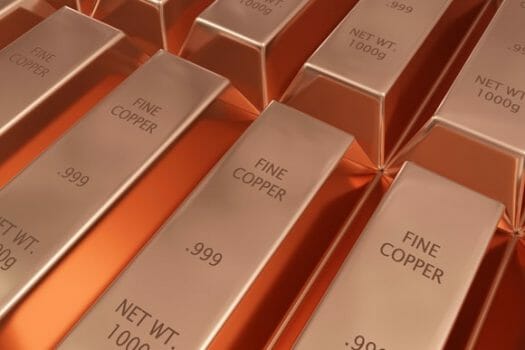 Copper is also used in about a gazillion different consumer products. Electronics, jewelry, musical instruments, cookware, home appliances… you name it. There are countless old-school applications. But the biggest demand catalyst is the transition to green energy and electric vehicles.

Your average gasoline-burning sedan rolls off the assembly line with maybe 50 pounds of copper. By contrast, the average electric vehicle needs 180 pounds, three to four times as much. Multiply that by global sales of 3.2 million battery-powered and hybrid vehicles last year (a 40% increase) and usage quickly starts to build.

You can’t add renewable power to the grid without copper either. A single wind turbine requires 4.7 tons (along with a cornucopia of other metals). Per megawatt, wind and solar projects require five times as much copper as conventional power plants.

All told, the world currently uses 24 million metric tons of copper per year. For perspective, the Statue of Liberty weighs just 205 tons. And as the green wave builds, consumption is headed nowhere but up. Annual copper demand is expected to increase by 8 million tons over the next decade, due in part to China’s ravenous appetite (which swallows nearly 50% of the world’s supply each year).

Where will that 8 million tons come from? Ponder that question, and you will understand why prices have been spiking.

If you haven’t noticed, copper has been unstoppable lately. After bottoming last March during the depths of the pandemic, copper prices started to bounce in April. They rallied again in May, picked up steam in June – and haven’t looked back since. For those keeping track, the metal has now increased for 11 consecutive months… and counting.

Okay, maybe that’s not quite as impressive as Yankee great Joe DiMaggio’s 56 game hitting streak. Still, if you’re a commodity investor, it’s far more profitable. This is the longest unbroken winning streak for copper ever recorded, breaking the former record of nine straight monthly gains set over a quarter-century ago.

Take a look at the chart below. 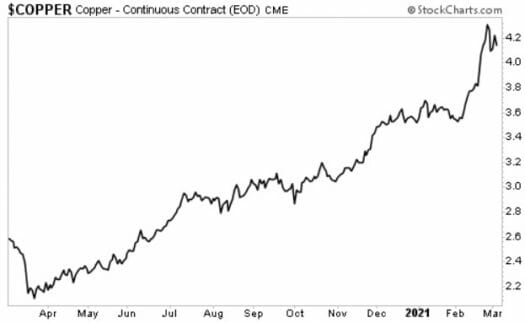 This powerful run has driven copper futures through the $9,000 per ton mark – the highest level in nearly a decade. (The chart above is priced on a per ounce basis.) For perspective, the metal was languishing last March at multi-year lows near $4,300. That’s an impressive rebound of more than 100%.

Analysts are almost uniformly bullish in their outlook, suggesting there is still more gas left in the tank. Citigroup, for one, is forecasting copper to breach $10,000 per ton “sooner rather than later” and possibly revisit its former all-time peak of $10,190. There are even whispers of the metal potentially hitting $12,000.

That upturn coincides with a revival of global economic activity. They don’t call it “Doctor Copper” for nothing. It earned that nickname for an uncanny ability to probe the health of business and industry. Because the versatile red metal is widely used in manufacturing and construction, copper price movements are viewed as a reliable economic thermometer.

Clearly, the prognosis is looking much better today than it did a year ago. You might say the good doctor is calling for a full recovery.

Simply put, producers won’t be able to keep pace with all this demand. Chile (the world’s top supplier) saw output slip by 100,000 tons in 2020 amid slowdowns at key mines such as Codelco and Escondida. That’s the second straight annual decline. Peru has also reported back-to-back years of zero to negative growth.

Covid shutdowns are partially responsible, as the lack of personnel caused supply disruptions. While those hiccups can be fixed, the root causes of this trend were evident long before the pandemic. Many of the largest mines have been tirelessly spitting out copper for decades and are now entering their retirement golden years. As the best deposits deplete, ore grades fall and output dwindles. Environmental shutdowns of regional smelting facilities have also taken a toll on the supply chain of refined materials.

To make matters worse, exploration and expansion activity has waned in recent years as leaner profits forced budget tightening. And even when a new large-scale discovery is made, bringing the site to production takes considerable lead time – often 10 to 20 years.

Some of the best-case scenarios call for copper supplies to inch up by 1% to 3% annually over the next few years, perhaps half of the 5% demand growth forecast by Bloomberg. As it stands, the market is already under-supplied. We are headed for a projected shortfall of 400,000 tons in 2021.

If the forecasts above are accurate, that deficit will widen, not narrow. The writing is on the wall. The world needs huge (and growing) volumes of copper… for washing machines, for jet airplanes, for power plants, for new Tesla vehicles…

Meanwhile, stockpiles in China are currently at the thinnest levels in nearly 10 years. Warehouse inventories at the London Metals Exchange recently dipped below 100,000 tons (less than a 2-day supply) for the first time since 2007.

Bottom line: Tight supplies tell me that the run-up in copper prices is being fueled by real fundamentals on the ground, not speculators.

Now, there are a few ways you can play this. In fact, over at my High-Yield Investing premium service, we added a closed-end fund that’s focused on commodities and resource producers. It gives us broad exposure to the commodity “super-cycle” that’s taking shape – and offers a yield of nearly 6%.

But if you’re looking for a more aggressive play that’s poised to benefit more directly from copper’s upside, then my colleague Dr. Stephen Leeb has you covered…

He’s found a small company sitting on a massive copper deposit remote Alaska. It’s so big that every time copper rises a penny, it’s worth an extra $89 million. If copper inches up past recent highs, then these deposits will be worth $36 billion.

But that could be just the beginning… Dr. Leeb thinks copper could hit $10 a pound, which would send this pick soaring.