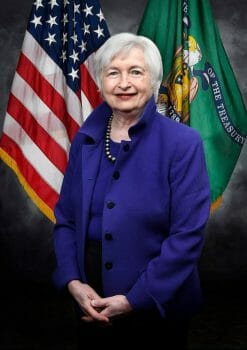 Years ago, I had the opportunity to see Janet Yellen at a CFA conference in Denver. She spoke after lunch (dried chicken and overcooked vegetables), and I remember noticing her Hermes scarf and thinking the Fed members aren’t normal government employees, at least when it comes to pay.

There’s so much you can say about the former Chair of the Federal Reserve and current U.S. Secretary of the Treasury. She is obviously an incredible economist, meticulous in her research, thoughtful, intelligent, and even a great speaker to boot.

And once I saw her in person, I added another descriptor to my list. You see, Yellen is also short — measuring in around 5’3″. It’s something I didn’t know about her until I saw her face to face at the conference. According to reports, her height is one reason she wasn’t reappointed to another term as Chair of the Federal Reserve… as then-President Trump thought she was too small for the job.

Last week, Yellen showed it doesn’t matter how tall she is. Her speeches can move markets even if she uses a step stool to reach the podium.

Did Yellen Move The Market?

Her impact can be seen in the chart below, which looks at how the SPDR S&P 500 ETF (NYSE: SPY) reacted to Yellen’s speech last Tuesday. This is an intraday chart with each bar representing 10 minutes of market action. As you can see, SPY dropped right off the bat, falling more than 1.5% in the morning. Analysts blamed Yellen, who was speaking at an economic forum presented by The Atlantic.

In her speech that morning, Yellen said, “It may be that interest rates will have to rise somewhat to make sure that our economy doesn’t overheat. Even though the additional spending is relatively small relative to the size of the economy, it could cause some very modest increases in interest rates.”

“But these are investments our economy needs to be competitive and to be productive. I think our economy will grow faster because of them,” she added.

It seems that she may have noticed the market’s reaction. Later in the day, according to CNBC, “she tempered her comments somewhat on the need for higher rates, saying she respects the Federal Reserve’s independence and was not trying to influence decision-making there.

“It’s not something I’m predicting or recommending,” Yellen told the Wall Street Journal’s CEO Council Summit. “If anybody appreciates the independence of the Fed, I think that person is me, and I note that the Fed can be counted on to do whatever is necessary to achieve their dual mandate objectives.”

What The Charts Are Telling Me

While Yellen’s comments created some short-term volatility, the market continued to move higher and ended the week with a bullish chart pattern.

But was that enough to push the technicals firmly back into “strong bull” territory? Let’s go to the charts.

Like last week, I am looking at the candlestick pattern. In a candlestick, the open and close are marked by rectangles, which are known as the “body” of the candle. The vertical lines in candlestick are known as “shadows” or “wicks.”

Last week, I noted the candlestick pattern told us to expect bearish market action. We did see a selloff early in the week and a bullish ending to the end of the week. Now, we have a “hanging man” candlestick — a relatively small body with a long lower shadow. This tells us to expect a bullish start to the week.

But other indicators are bearish.

Looking back to the chart above, you’ll find my Income Trader Volatility (ITV) indicator shown in the bottom panel. As I’ve said before, ITV is similar to VIX in that it rises as prices fall, but I find it to be more useful than VIX because we can apply it to individual stocks. (It’s the same award-winning indicator I use to identify trades over at Income Trader, my premium service.)

Since last week, the ITV indicator (red line) has been on the rise, and has crossed back above its moving average (blue line) last week.

The dashed line in the chart shows an important support level near $410. A break below that would confirm the ITV “sell” signal.

Our last chart this week shows my Profit Amplifier Momentum (PAM), which is shown on the daily chart of SPY below. PAM is designed as a short-term indicator. Recently, it has been trending bearish. However, it appears to have bottomed on Wednesday and is showing strength as price breaks out (note the shrinking red bars in the bottom panel). This is actually a bullish sign, and I will be watching closely to see if it continues to show strength.

So, to add it all up, we have candlesticks and PAM, which are both bullish, yet ITV is warning of a possible decline. In this scenario, I am nervously looking for higher prices while watching that support line at $410.

P.S. For the past several years, my followers and I have been using a “P.I.N.” code strategy to withdraw up to $748 in cash from the market — instantly.

Our “Personal Income Number” trades have been successful 90.2% of the time, on average — and you can start today with 3 easy steps.