If you’re a sports fan, then you know that it’s tough for even the best to remain on top year after year. Throw a couple of interceptions in the playoffs, miss a few open baskets with the game on the line, go hitless in a 4-game homestand against your biggest rival… even loyal fans start to grumble.

What have you done for me lately? That’s the mentality of sports fans whenever a player (or team) is struggling.

They don’t care that you’re a perennial all-star or that you won the MVP award back in 2016. That’s all in the past. All it takes is one sub-par season for fair-weather fans to stop wearing your jersey and management to start exploring trade options.

Investors are no different. Take the gold-medal Dodge & Cox Stock Fund (DODGX), a staple in many 401(K) plans. The equity income fund has been an elite performer, beating 98% of its peer group over the past decade and outrunning the S&P 500 by more than 90 basis points annually over the past two decades.

But even the greats go through an occasional slump. DODGX tumbled when Covid struck last year, sliding more than 30% in February and March. Of course, there were extenuating circumstances. But that didn’t stop some short-sighted investors from redeeming their shares and cashing out.

You can probably guess the rest. The fund is back to its winning ways, soaring more than 100% from last year’s lows. 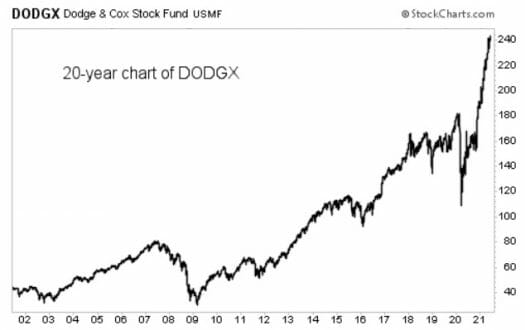 I bring all this up for two reasons.

First, Dodge & Cox is contrarian by nature, opportunistically pouncing on cheap stocks that have temporarily fallen out of favor. Using a rigorous, bottom-up research process, the fund is drawn to quality businesses with sound balance sheets, durable competitive advantages, and strong future cash flow potential. Many of these underpriced holdings might be facing short-term concerns or transitory headwinds. But they have no permanent flaws, so management waits patiently for a recovery – collecting steady dividends along the way.

In that way, it’s quite similar to our approach over at at High-Yield Investing.

More broadly, this is emblematic of what we’re seeing across the entire market. It’s not just Dodge & Cox. The T. Rowe Price Value Fund (TRVLX) has posted a powerful return of 49% over the past year. The Fidelity Value Fund (FDVLX) has rallied 73%. 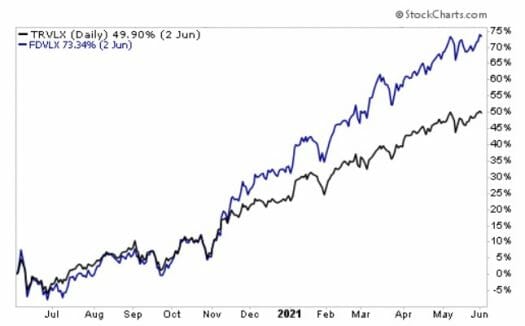 Value stocks everywhere (particularly small caps) have finally mounted an incredible comeback. And it didn’t happen a minute too soon. Investors had just about given up on the entire asset class.

There are numerous academic studies proving that value holds the long-term edge over growth. That’s why countless funds track “intelligent” custom indexes flavored with value metrics such as high return on equity and low price-to-book. We also know that legendary investors such as Warren Buffett (and his mentor Ben Graham) crushed the market by favoring stocks trading at a measurable discount to their inherent value.

But the fact is, value stocks (including most dividend payers) have been playing second fiddle to growth stocks like Apple and Amazon for well over a decade. This trend started at the tail-end of the 2009 recession and has been firmly in place ever since, with growth outrunning value in 11 of the past 12 calendar years.

The gap has been so persistent that the whole “buy low, sell high” notion had almost become a bit quaint. Some might even say obsolete. Sure, value had some great years. But like a washed-up former star, maybe he was past his prime and needed to retire. Investors abandoned this group in droves last year, yanking away more than $70 billion in assets from domestic value funds.

As sports announcer Lee Corso would say, not so fast.

Value has made a huge comeback lately, with smaller stocks leading the charge. According to Morningstar, small-cap value has gone from the worst-performing style box category to the best, notching a year-to-date return of 21.5% — versus a tepid 2.2% for large-cap growth.

This trend began last fall with the rollout of Covid vaccines but has kicked into high gear the past few months.

Another study from Dimensional Fund Advisors shows that small-cap value trounced large-cap growth by more than 60 percentage points in the six months ending April 1. The last time we saw a point differential like that, Franklin Roosevelt was President.

It had to happen eventually.

It’s not that value stocks have performed poorly, rather that growth stocks had been unstoppable. Relative valuations between the two asset classes had become skewed to a disparity never before seen, so a rotation was long overdue.

I’m happy to report that we are making the most of it over at High-Yield Investing. For example, our specialized mortgage insurance play has rallied 39% so far this year. Our energy refining holding has advanced 48%. And a legacy data storage maker we own has surged 60%. Meanwhile, the S&P 500 has returned about 12%.

We don’t necessarily set out to beat the major averages, but it just works out that way. In fact, our High-Yield Investing portfolio value has grown to a new record high. That’s thanks in large part to our focus on value — in addition to income, of course.

I don’t think this process has run its course, so get ready to take action in the weeks and months ahead. In the meantime, if you’d like to learn more about the market-beating yields we’re finding right now — go here to check out my latest report.