How “Crisis” Can Lead To Opportunity (And Triple-Digit Upside)

A few years ago, I boarded a single-engine Cessna 206 loaded with rafting and fishing gear. Wedged up front was just me and the pilot, our seats racked all the way forward to make as much room as possible for the raft, coolers, dry boxes, and dry bags.

The small aircraft taxied to the runway. The pilot did some last-minute checks before gradually pushing the throttle forward to propel the plane down the asphalt strip.

The engine struggled under the weight of gear, the day’s heat, and the suffocating smoke. As we slowly ascended into the sky, we made multiple circles around the valley below us, catching updrafts to help us reach the altitude needed to make it over the mountain ranges.

Our destination was a dirt airstrip carved into the mountains deep into the backcountry. The visibility was terrible. It was late August, and forest fires had been raging for two months. We weren’t even sure if we would be able to make it, let alone the four other planeloads that needed to follow.

As we flew over the mountain ranges I could occasionally look down and see flames flickering up at us on the rare occasion the visibility allowed. Fortunately, our plane made it in safely. We quickly unloaded, and the pilot took off. But the winds picked up, flaming the fire, and the visibility worsened. My pilot made it back to base safely, but the visibility was too bad for any of the other planes to make it in.

I was stranded in the backcountry by myself. Although it was the middle of the day, the smoke was so thick that it made it seem like dusk, except with an orangish glow. You couldn’t see more than 100 yards. It was like a scene from a sci-fi thriller movie. Ash was falling like snowflakes and quickly covered all my gear.

It was a vulnerable feeling, being alone in the backcountry in the middle of a raging forest fire, with ash falling, and visibility so low you don’t know if the fire is blazing on the ridge behind you. Fortunately, I made it out okay.

I bring all this up because as scary and surreal as that feeling was, I can only imagine the terror, destruction, and loss that families in California have experienced over the last few years as wildfires have swept through the state.

I’ll admit, this may not be the easiest thing for some investors to contemplate… After all, it was tragic, and the effects of the situation are still being dealt with today. But as I tell my Top Stock Advisor readers, some of the best investment returns you’re likely to ever make can be found in the wake of a crisis.

If you don’t remember, 2018 was an especially devastating year for California wildfires. There was the Mendocino Complex Fire, which was the largest in state history. Then there was the Camp Fire, which started in the early morning on November 8, 2018. This was the deadliest wildfire in California’s history. The fire burned more than 153,000 acres (approximately the size of Chicago). It killed 85 people and destroyed more than 19,000 buildings. It essentially wiped the 27,000-person town of Paradise off the map. It only took four hours for the fire to rip through the town, leaving little time for people to evacuate. 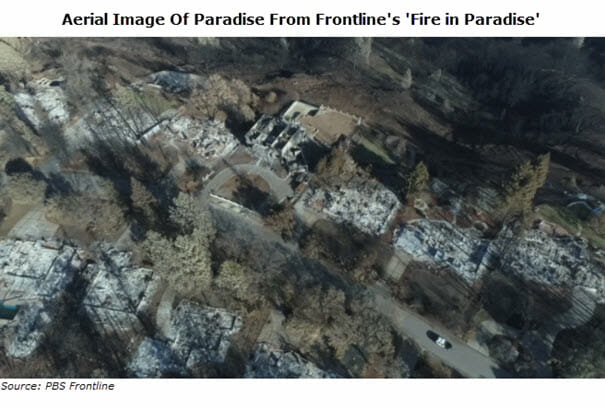 The tragic Camp Fire was started from a nearly 100-year-old electrical transmission line. The utility company that owned the line eventually filed for bankruptcy protection as it faced tens of billions in fire-related claims. This was the largest ever utility to enter bankruptcy. Shares of the utility company fell off a cliff as news of its fault in the fire surfaced…

The company exited bankruptcy last year and agreed to pay $25.5 billion in fire-related claims. And to be clear, it still faces risk and uncertainty. But some of that risk and uncertainty was taken off the table thanks to a recent bill passed in California. It will enable the state’s publicly-traded utilities to self-fund an insurance pool of sorts that would pay for wildfire-related claims in the future.

As I explained to my Top Stock Advisor readers recently, this is a big deal — not only for the state, but from an investment perspective as well.

You see, utilities are a fairly predictable business. Since they’re heavily regulated, we can reasonably estimate how much the company will earn, and assign a reasonable valuation based on the industry norm to come up with a price target. So removing the prospect of a major liability from an unpredictable event like this is huge.

It offers us an opportunity for 100%-plus upside in the coming years… from a utility. That rarely happens — ever. And that’s why we added this hated company to our portfolio over at Top Stock Advisor.

I’m not going to reveal the name of the company today, out of fairness to my premium readers. (Although it’s not too tough to figure it out.) But what I want you to take away from all this is a far more valuable lesson…

The average investor isn’t looking at opportunities like this. When things like this happen, there is usually a well-deserved stigma surrounding the situation or the company at fault. So most investors stay far, far away…

But there’s a reason why I’ve harped on the “crisis” investing theme over at Top Stock Advisor time and time again. And that’s because it’s done very well for us over the years.

Whether we’re talking about wildfires in California, Covid-19, or whatever the next crisis happens to be, I highly encourage you to dig deeper and look for opportunities where most investors shy away. You’ll be glad you did.

P.S. I’ve been researching the “next investment frontier” in tech for the past few months. And I’m convinced this is the next big thing…

You may already know that Elon Musk is busy commercializing outer space with his company, SpaceX. Dozens of other companies are scrambling to win the race, too. But what’s barely getting any attention in the mainstream press is one of Musk’s “secret” projects that could be an absolute game-changer. And I’ve discovered a unique “backdoor” way we can gain exposure before the crowd catches on…