3 Ways To Tackle Inflation Now (Before It’s Too Late)…

Last week, my wife and I went out for lunch at one of our favorite local restaurants. When I glanced at the menu for my favorite item on the menu — the buffalo wings — I thought there was a typo: $19.95.

I was shocked. I had just eaten at this very place two months ago and I paid $14.95. And I thought that was a tad high at the time.

Understand, I don’t live in a coastal city or an expensive state like California or New York. I live in a place where you can still buy a pint of beer for a few bucks. Or at least I used to…

This is really just a small part of a much bigger problem. One that I’m getting more and more concerned about…

You see, my goal over at Top Stock Advisor is to help my readers become better investors and build wealth. A silent killer to keeping and building that wealth is inflation. So, it’s vital to not only understand it, but know what steps to take to protect yourself from it. I’ll give you a few ideas in just a moment. But first, let’s talk about inflation…

The Secret Destruction of Wealth

This isn’t the first time inflation has been a key topic for the markets (nor will it be the last). Coming out of the financial crisis in 2009, inflation was a hot topic, and one that never materialized. But this time could be different…

To be sure, inflation in of itself isn’t bad. It’s pretty normal — and good — for countries to experience a bit of inflation. But the trick is not letting inflation get out of hand.

In other words, rapid inflation is not good.

Ernest Hemingway once commented, “The first panacea for a mismanaged nation is inflation of the currency; the second is war. Both bring a temporary prosperity; both bring a permanent ruin. But both are the refuge of political and economic opportunists.”

I especially want to point out the part where it says, “Both bring a temporary prosperity.”

I believe we are seeing this right now…

You see, we are in a massive stimulus, money-printing experiment. And all this “stimulus” money is making people feel better and richer, temporarily. Checking and savings accounts are getting fatter, and they feel like they’re finally getting ahead.

Don’t just take my word for it. You can see the effects in the latest data out of the U.S. Bureau of Economic Analysis: 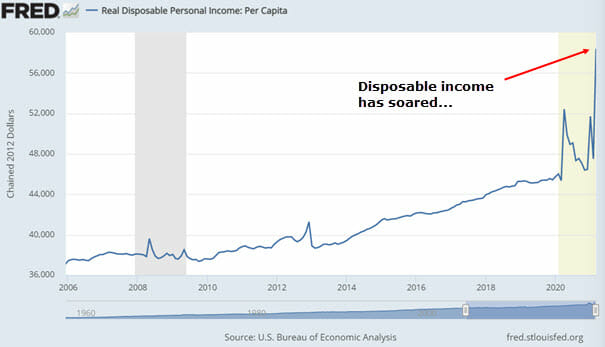 As you can see, real disposable income (or extra cash people have) has climbed to record highs since the pandemic started and the government began handing out its “stimmy” checks.

Is this the temporary prosperity Hemingway was talking about? People may have more money in their accounts, but they’ll soon realize that things they’ve yearned for if they just had a little more money — houses, boats, cars, etc. — are still just out of reach.

Inflation can turn into a real concern if you’re not paying attention. You have to be proactive. After all, it picks up faster than anyone thinks, and the Fed usually reacts slower than they need to.

There’s a reason JPMorgan Chase (NYSE: JPM) now has $500 billion in cash on its books. CEO Jamie Dimon said in a recent conference that he anticipates higher inflation will force the Federal Reserve to boost interest rates, which he can then deploy that cash into treasuries at higher rates.

But we aren’t banks. And while I do like stockpiling cash for an emergency fund, one of the key detriments of inflation is that it eats away purchasing power. Just look at my buffalo wings for example.

We all know that cash in a savings account doesn’t earn anything. So what can you do if you have a low risk tolerance and want to remain conservative?

I’ll let Jason Zweig of the Wall Street Journal explain why every investor should be aware of this exceptional U.S. government security. I’ll be buying $10,000 (the max) for myself and my wife. Here’s an excerpt from his article:

Economists say there’s no such thing as a free lunch, but I bonds offer a guarantee from the U.S. government that you can recover your original capital plus any increases in the official cost of living along the way. The only catch is that this isn’t an all-you-can-eat buffet: The maximum purchase is $10,000 per year per account holder (unless you elect to take your tax refund in the form of an I bond)…

Ironically, the less you earn and have to invest, the more powerful a tool I bonds are. Sorry, Mr. Bezos.

In today’s yield-parched world, money-market funds are paying 0.02%, bank savings accounts 0.13%, a three-month Treasury bill 0.15% and even a 30-year Treasury bond only 2.25%. The income on I bonds is so juicy, it’s barely below that of leading high-yield or “junk” bond funds, which are much riskier.

If you’ve never heard any of this before, don’t feel bad. Zvi Bodie, a consultant on retirement issues who formerly taught finance at Boston University, says he regularly speaks to groups of financial advisers. When he asks how many are familiar with I bonds, “less than half the hands go up” in the audience.

“I bonds are the best-kept secret in America,” says Mr. Bodie. With a total of just $46.4 billion outstanding, they amount to less than 0.17% of all U.S. debt held by the public, according to the Treasury Department.

That’s partly because financial advisers have no incentive to sell I bonds, which don’t pay commissions or charge expenses and are available exclusively from the U.S. government (see TreasuryDirect.gov).

No. 2: A great inflation-beating tool is buying exceptional businesses at fair prices. In other words, exactly what we do over at Top Stock Advisor. Look for world-class companies that can easily keep pace with inflation. Think of companies that can easily pass higher costs on to its customers. Starbucks can quickly and easily increase the price it charges for a coffee. The same can be said for Hershey. Insurance companies can increase premiums and toy-makers hike up the cost of their toys.

One area to look into is land. More specifically, U.S. farmland. And believe it or not, this can be accomplished in the stock market.

When food prices go up, farmland prices go up. And there’s no shortage of mouths to feed. In the 1970s, during the last period of rapid inflation, Iowa farmland climbed a whopping 390%. That greatly outpaced the stock market.

During the financial meltdown, farmland didn’t fall in a single quarter. No wonder Bill Gates has been snapping up major swaths of farmland across the country (and is now the biggest private owner of farmland in the U.S.).

There are two real estate investment trusts (or REITs) that I recommend looking into: Farmland Partners (NYSE: FPI) and Gladstone Land (Nasdaq: LAND). Both REITs own thousands of acres of productive farmland and are worth further investigation. But both have reached new highs recently, so be patient.

No. 3: Invest in yourself. Even though this one falls to number three on my list, it’s really the No. 1 thing you should do — and always be doing. If you have a business, are there new opportunities you could be looking into? And if you don’t have a business, you should consider starting one.

In other words, diversify your income. Start an online business or side hustle. Buy a business that produces solid cash flow and is passive or semi-passive, like storage units, car washes, parking garages, etc.

The biggest piece of advice I have — and this is regardless of whether we actually see inflation or not — is don’t be complacent. Don’t do nothing. Be proactive, get creative, because the goal is to create wealth and protect it.

In the meantime, another thing I recommend looking into is something I’m calling the “next investment frontier” in tech…

You may already know that Elon Musk is busy commercializing outer space with his company, SpaceX. Dozens of other companies are scrambling to win the race, too. But what’s barely getting any attention in the mainstream press is one of Musk’s “secret” projects that could be an absolute game-changer.