This Stock Could Profit From A Battle Brewing In The Cloud

Back in July, I talked about how Marc Benioff kickstarted the cloud computing revolution. I also discussed how the gargantuan $370-billion-plus cloud computing market still has a lot of room for growth ahead of it.

What I didn’t talk about is an issue that is causing a bit of an uproar in the space — and it’s something that will need to be addressed in order for the growth to continue.

I’m talking about the pesky “buyout” fees that the large cloud computing companies charge if you want to leave.

So today, I want to talk a little about the fight brewing over these fees, and how one of our holdings over at Top Stock Advisor is looking to take advantage of this fight to bolster its position in the space.

The Fight Over Big ‘Exit’ Fees

The biggest player in the cloud space is Amazon Web Services (AWS), with more than 40% of the market share. And this division of Amazon (Nasdaq: AMZN) has been on a tear… In its latest quarter, AWS hit roughly $15 billion in sales, a 37% year-over-year increase. And for the large part, customers are happy with the service AWS provides.

But let’s say your business decides it wants to give another cloud provider a try, like Google or Microsoft. In order to do so, you must pay Amazon an “egress fee.”

This isn’t just an Amazon exit fee either. Turns out this fee is common in the industry. And when you read about what some of these providers are charging, it seems a bit outrageous.

Two weeks ago, Amazon was put on blast regarding its “above market” egress fees, calling them an anti-competitive move to lock in customers. This could be the first shot fired in a significant battle over this business practice. And while I don’t think it will materially impact the growth of the cloud in the long term, one of our Top Stock Advisor holdings sees blood in the water.

Over at Top Stock Advisor, we call Cisco Systems (Nasdaq: CSCO) the “backbone of the internet”. That’s because it is the leading seller of hardware that shuttles data between data centers. And Cisco is looking to potentially lure customers away from their cloud providers like AWS, Microsoft Azure, and Google Cloud, and back to private data centers.

Looking to capitalize on the frustration many companies have faced with increasing costs and large exit fees, Cisco has been developing a subscriptions service to help companies move their computing tasks from AWS to private data centers, according to a report by The Information.

The service would also manage hardware and software within private data centers for customers who can’t or don’t want to do so on their own.

Of course, part of the beauty with cloud providers is that you don’t have to deal with purchasing your own hardware and software to manage all of the applications. But if Cisco could bundle those expenses (namely the hardware) into a subscription service that made sense it would have to be pretty tempting for large companies to switch. After all, the big pain point of hosting your own data centers is the costs of purchasing hardware, software, and the employees to manage it, which Cisco would take care of.

If Cisco could successfully launch such a program, it could be a major boon for sales and profits.

When asked about such a program, a Cisco spokesperson denied that it would be offering any such service.

But we know that just because a company denies something, doesn’t mean it isn’t lurking in the shadows… good or bad.

For example, I will never forget when the CEO of former holding Macquarie Infrastructure (NYSE: MIC) specifically said, “…people slashing their dividend saying we’re going to slash our dividend to deploy capital internally, I don’t think you’ll see us do that” and, “I would be pretty surprised if anything changes going forward.”

Well, fast forward one quarter and the company slashed its dividend to… deploy capital internally. Just three months after saying directly they wouldn’t be doing that. So, I take this “denial” by Cisco with a large grain of salt. The denial most likely reflects its attempt to keep a lid on the project and not get analyst hopes up. 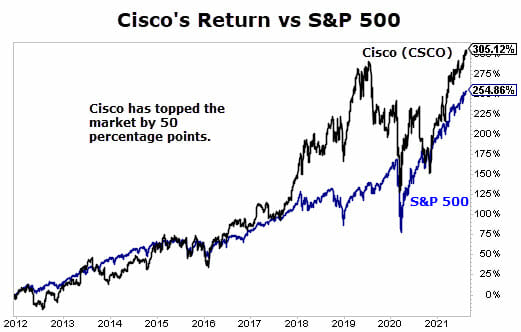 I would be pretty surprised that we don’t see this exact service offered by Cisco in the next year. And that would be good news for investors. In the meantime, Cisco is the longest-tenured stock in our portfolio over at Top Stock Advisor. We added it in December 2011 (we also made three more subsequent investments in the stock). But as you can see in the chart above, since that initial recommendation, shares are up over 300%.

Compared to the other tech giants, Cisco tends to fly under the radar these days. But as we often tell our readers, sometimes it pays to own stocks like this. They may not capture all the headlines, but yet they quietly outperform year after year.

The company has plenty of other initiatives to keep cranking out the cash flow, including 5G, the Internet of Things, and the eventual return to the office by workers, which will mean companies will need to continue investing in its office internet infrastructure. But if this rumor is true, you can add it to the long list of technological innovations that Cisco will benefit from in the next few years.

P.S. If you’re looking for a smaller tech stock with even more upside in the years ahead, then you need to see this…

The world’s richest billionaires-Musk, Bezos, and Branson… are in FIERCE competition, battling it out in what media is calling the “billionaire space race”. In short, they each plan to dominate the $2.5 trillion space industry. But ONE of these billionaires may have already won the race… thanks to a new technology they’ve developed that is hovering above the earth as we speak.

And we’ve found the perfect stock to “piggyback” from this new space race. Go here to learn how to profit now.