5 Ways We Can Profit From Infrastructure Spending

I shared a picture with my High-Yield Investing subscribers that scared the daylights out of me recently.

The image, reportedly taken by a kayaker, captures one section of a 900-foot steel beam undergirding the I-40 bridge between Arkansas and Tennessee. Check it out below. Zoom in closely, and you can see a devastating fracture running from top to bottom. 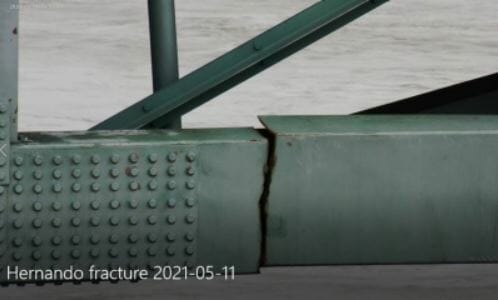 Built in 1973, the 2-mile bridge into Memphis has clearly weakened a bit in its old age. About 50,000 vehicles cross the Mississippi River daily on this 6-lane span, and officials believe fatigue may have been a factor. Thankfully, the crack was spotted in time and a potential catastrophe was averted. The I-40 crossing has since been closed for repairs and traffic re-routed.

Unfortunately, this is far from the only such structure in desperate need of an overhaul. There are 617,000 bridges in the United States, nearly half of which are more than 50 years old. Nearly 8% (approximately 45,000) have been rated “structurally deficient”.

The cost to fix all these unsound bridges? About $125 billion.

Believe it or not, this is a relative bright spot. As I discussed in this piece, our nation’s infrastructure is in dire shape. And it has been for years…

Here’s Some Ideas On How To Invest…

I’ve covered some of these facts and figures previously in the annals of my premium High-Yield Investing advisory, as well as other publications. Infrastructure investments have served us well over the years – even with government spending coming in dribs and drabs. That’s because you could argue that many infrastructure assets are timeless cash generators.

Take Brookfield Infrastructure (NYSE: BIP) for example, which owns a number of infrastructure assets (from telecom to energy to toll roads and more). We’ve held it in the High-Yield Investing portfolio since December 2011, and it’s delivered a total return of 345% — compared with the S&P 500’s 271% over the same period. And the thing is, I think it’s even more appealing today than it was a decade ago… 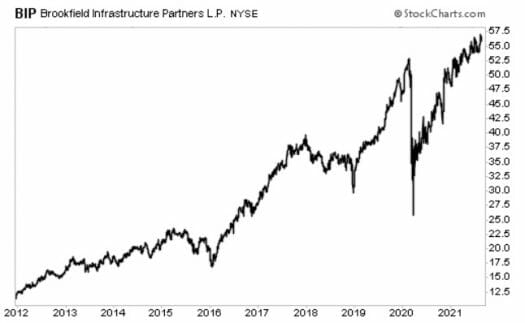 So if you’re thinking about how to profit from infrastructure spending, consider that one a freebie. But plenty of businesses will line up to feed at this trough. So to help narrow down the list of prospective winners, here are five groups you may want to consider.

1. Internet/Telecom – The architects of this plan (and the powers that be) have emphasized the importance of universal broadband internet connectivity. It’s not a luxury anymore, but a basic necessity. The bill will ensure (through the aid of grants) that high-speed internet and 5G cell service extend into rural areas and low-income neighborhoods. Expect to see money flow towards cell towers, small cell node structures, fiber cable, and other telecom infrastructure.

2. Utilities – It doesn’t get much more basic (yet vital) than having clean drinking water and reliable electricity. Maybe that’s why the largest financial outlays have been allocated to these two areas. There are 148,000 water systems in the U.S., many of which serve small communities and lack the funds for large-scale projects. Meanwhile, forced blackouts in densely-populated states like California and Texas underscore the need to upgrade power generation and distribution lines.

This bill will allow many utilities to expand and improve their systems using public funds. The legislation will also be highly supportive of wind, solar, and other renewable power initiatives.

3. Heavy Machinery – Have you ever tried to build roads, tunnels, or dams without heavy construction equipment? If we’re about to start digging, building, and paving, then manufacturers like Caterpillar (NYSE: CAT) should see a sharp influx of new orders for loaders, backhoes, and other big-ticket items. As it stands, the company posted a healthy 29% increase in sales last quarter and just upped its dividend.

4. Construction Aggregates/Steel – In the same vein, you can’t build without the proper materials. Whether it’s a new highway off-ramp, a hospital parking lot, or a runway extension, most projects require sand, gravel, and crushed stone aggregates. They are the building blocks of civilization, comprising 80% of concrete and 90% of asphalt.

Likewise, steel is used to reinforce just about every major construction project. Nucor (NYSE: NUE), whose product catalog includes rebar, pipes, and guard rails, will be used to support the construction of schools, water treatment plants, sewer systems, and countless other infrastructure projects. Things are already going pretty well. Through the first half of 2021, the company has delivered more than $8.00 per share in earnings, setting a new yearly record – with two quarters left to go.

Did I mention it has also distributed 193 consecutive quarterly dividends?

5. Engineering and construction – Materials and equipment are important. But before you get that far, somebody first has to draw up the plans. That usually falls to a project management firm like Fluor (NYSE: FLR) that handles the design, construction, and maintenance of large, complex projects.

The company already has a $20 billion work backlog on its plate, having recently been awarded contracts to build a new interstate extension in Dallas and subway stations in Chicago (among others). With more work on the horizon, management has just confidently raised its earnings outlook.

Aside from BIP, I just mentioned four potential beneficiaries in passing. Here’s a look at how those four previously mentioned picks have fared against the S&P 500 in the past year… 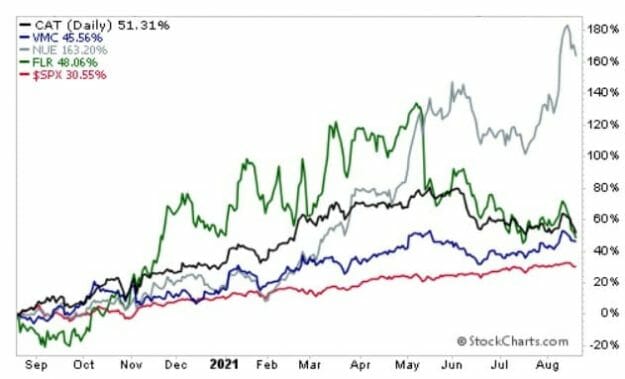 Now, whether they are outright “buys” today is another question. The truth is that valuations for some of these names have become a little stretched. But I’m still keeping an eye on them, as well as other areas of interest, most notably commodities.

A trillion in new construction will be a catalyst for even stronger demand for key metals such as copper. And manufacturers like Charge Point (Nasdaq: CHPT) are salivating at the proposed $7.5 billion reserved for electric vehicle charging stations. I could go on, but you get the idea…

What I encourage you to keep in mind, though, is that the investment potential for infrastructure has real staying power. And a few of these names could be a portfolio anchor for years to come.

Editor’s Note: In a recent issue of High-Yield Investing, Nathan told subscribers about his absolute favorite new pick to profit from infrastructure spending…

You can learn how to get access to this pick (and more) by checking out Nathan’s latest research.

You’ll about a group of five “bulletproof” high-yielders money that have weathered every dip and crash over the last 20 years. And they all offer yields of 5% or more right now…