The High-Yield Way To Invest Like A Venture Capitalist

Most regular investors haven’t heard of a guy named Jim Breyer. But Silicon Valley insiders know him as one of the most powerful venture capitalists around.

Back in 2005, his venture capital firm Accel Partners plunked down $12.2 million for a stake in a little-known startup run by a college dropout by the name of Mark Zuckerberg — a name I’m sure you’re familiar with.

By the time May 18, 2012 came around, both men made an absolute mint. That’s the day Meta Platforms (Nasdaq: META) (then known simply as Facebook) went public, allowing early financial backers a way to put a dollar value on their stake and eventually cash it out. Breyer was one of the biggest early backers of Facebook, at a time when some thought he was crazy to put that much cash in an untested and little-known social networking website.

But the risky wager paid off with astronomical returns.

By the time Facebook made its debut on the Nasdaq seven years later, it had 800 million users worldwide and was worth approximately $100 billion, making Accel’s 10% ownership stake worth around $10 billion. You sometimes hear about 2-baggers or 3-baggers that double or triple in value. This one was an 830-bagger, turning every $1,000 invested into $830,000.

Meta’s epic run may not be over. But it will never again come close to duplicating its unbelievable performance during the early years. 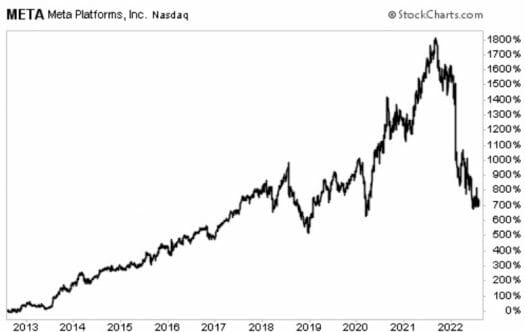 Sadly, that is the case for many publicly-traded stocks. By the time it hits the market and is available to regular investors, the biggest gains have already been cashed out. Like Facebook, most start-up businesses experience their sharpest growth long before they go public.

History is littered with examples of Silicon Valley investors taking a chance on an unknown business and then hitting it big when the company takes off. And occasionally — when business valuations soar from seven-digit to 11-digit territory — they strike gold.

A recent example is Airbnb (Nasdaq: ABNB), whose website links travelers with homeowners who have a spare house, apartment or bedroom to rent. In 2012, the up-and-coming company already had an estimated value of $2.5 billion. A few years later, it entered into financing talks that implied a valuation of $10 billion. Today, the company has a market cap in excess of $72 billion, nearly 30 times what it was worth a decade ago.

Needless to say, investors who got on board early were able to cash out life-changing gains.

Of course, this isn’t the only path to riches. Thriving young businesses attract attention and are often scooped up by larger companies looking for an earnings jolt. They are bought out before they can even reach the market.

That was the case with WhatsApp, a mobile messaging service purchased by Facebook for a staggering $19 billion. One of the biggest winners was Sequoia Capital, whose $8 million investment in 2011 blossomed into $3.5 billion. Incidentally, this same venture capital firm was also an early investor in Apple, Yahoo, and Google.

I don’t have to tell you what those three companies have done. The point is venture capitalists aim big. Depending on what stage of businesses development they enter, it’s not uncommon for these guys to take out anywhere from three to 10 times what they put in. Of course, not every investment pans out. Some fail spectacularly. But the big boys win far more than they lose.

How To Invest With The Big Boys

So how do ordinary investors participate? Well, the truth is many of us simply can’t — not exactly, anyway. Investing in a fund managed by Sequoia Capital or another VC outfit is restricted. Only accredited investors with an annual income above $200,000 or net worth over $1 million are allowed in.

In other words, this was a secret club with closed doors. But obscure legislation passed in 1980 has opened doors to an extent. And while you may not bank 10-bagger gains, you will find some of the highest yields the market has to offer. In fact, it’s not uncommon to earn dividend yields of 7%, 8%, even 10%.

First established in 1980 to grease the flow of capital into small businesses, BDCs are publicly traded entities that invest in privately held companies. There are a couple dozen members of this unusual class, each employing different tactics and assuming varying amounts of risk.

BDCs enjoy some unique perks, one of which is exemption from federal income taxes, provided the company distributes at least 90% of its investment profits to shareholders. In that regard, they are structured much like a real estate investment trust. They also carry some of the highest yields around — in this group, payouts of 8% are considered stingy.

What’s the catch? Well, because these companies don’t retain any profits, they must borrow or issue new shares to raise funding if they want to keep growing. That’s not always easy to do, particularly in uncertain times. But most have rainy day funds and know how to survive unsettled markets.

BDCs typically provide financial assistance to small and medium-sized businesses that are still developing and expanding and don’t always have access to traditional bank lending. The proceeds are normally used for growth projects and other operating needs, although sometimes the cash is needed for leveraged buyouts or other big transactions.

This financing can take many forms, from simple unsecured loans to collateralized senior debt to hybrid convertible bonds. It’s not uncommon for some loan packages to have an equity component that gives the BDC an ownership stake in the borrowing company — and thus an opportunity to profit handsomely.

In that sense, this isn’t too different from what venture capital firms like Sequoia are doing. Of course, BDCs may not necessarily have the next Facebook in their portfolio. But you will find smartly-managed portfolios that throw off some of the best income you’ll find in the market.

And of course, anybody can invest in a BDC, not just accredited investors.

If you find yourself frustrated by the lack of high-yield options in today’s market, I recommend giving BDCs a look. In a yield-starved world, BDCs have proven to be some of the best securities around for income-oriented investors.

In fact, I recently released a report on my three favorite BDCs to readers of my High-Yield Investing premium advisory.

You can go here to learn how to get it now.