What’s Going On In China? Here’s What You Need To Know…

Investors were treated to a rude awakening on Monday, as the market took a bearish turn.

The culprit: a Chinese company by the name of Evergrande Group (OTC: EGRNF).

If you haven’t heard the name before, you likely have now. The company is the second-largest property developer in the world, and they’re in deep trouble.

How much trouble? Try $300 billion in debt trouble.

The company has been a poster child for the excesses of the Chinese property sector. for years party leaders made the sector a key tool for economic growth and development. This implicit backing, along with lax regulation policies, led developers to borrow to the hilt in order to fuel growth.

I first remember hearing about so-called “ghost cities” in China as far back as 2012. And indeed, it was easy to find some pretty convincing footage online. Yet this is a sector that has continued to boom thanks to implicit support from the Chinese Communist Party, and it’s burned just about every major Wall Street big shot who’s tried to bet against it.

So how did we get here? As this article in the Financial Times points out, Chinese President Xi Jinping began taking steps last year to address the massive oversupply in Chinese property, drafting new rules to constrain leverage in the sector.

Oops. Since then, the Chinese property market has cooled, and Evergrande shares have been in a slow freefall. (Note: below is a chart of the over-the-counter shares.) 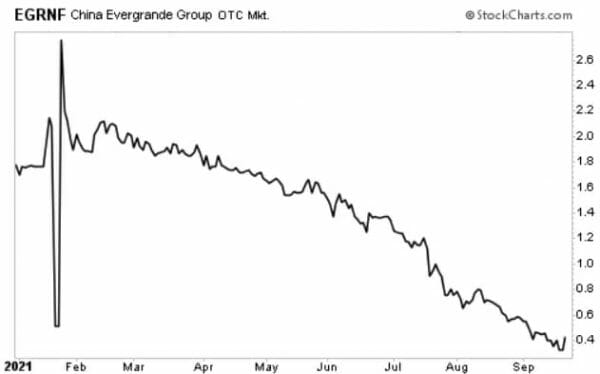 Experts believe Evergrande will in fact default on its payments – the question is simply when. The problem is that this debt is held by everyone from Chinese developers and investors to U.S. firms as well. After all, $300 billion is a huge chunk of change, and there is bound to be fallout. There are also potentially 200,000 Evergrande employees at stake, as well as upwards of 3.8 million jobs indirectly at play.

Many analysts think the CCP will step in and intervene in some fashion. But the regime has taken a noticeable turn in the past couple of years, flexing its muscle on everyone from Alibaba founder Jack Ma to online tutoring companies to kids playing video games, and more, ostensibly in the interest of creating broader prosperity.

So it’s possible that Evergrande may not escape the executioner’s axe, but the party may try to limit the collateral damage.

How successful they are will answer an even bigger question… whether this will be a “Lehman-type” event for the market.

For what it’s worth, in that Financial Times piece I linked to earlier, investing legend Jim Chanos (who predicted Enron’s collapse) believes it could be a Lehman moment, but limited mostly to within China’s borders.

We’ll keep an eye on the situation and will update accordingly. But for now, the market seems to have shaken off the initial shock. Instead, attention has turned to continued dovishness from the Fed. The central bank announced Wednesday that it will once again hold off on tapering its massive bond buying program… for now. Meanwhile, as expected, it announced no major changes to interest rates, although it’s worth noting that Fed voting members are growing more hawkish on increasing interest rates in 2022.

Add it all up, and the bullish thesis remains in tact… for now. But you need to remain nimble and take advantage while you still can…

That’s why my colleague Jim Pearce has created a tool that lets him pinpoint lightning quick profit opportunities more often than you’ve ever seen. It’s a tool that won’t be available to anyone else — not even his existing premium subscribers.

As this proprietary tool finds new money-making trades, Jim will only share them inside his new advisory, Personal Finance PRO. And he’s released a special briefing that will give you all the details. Click here for more.