2 Big Winners In The Energy Sector — Are They Worth A Look Today?

The spring of 2020 was a brutal time for most sectors, but perhaps none more so than the energy space. With global economic activity at a standstill, crude oil prices had just suffered their second steepest decline on record.

Even around his time last year, producers were settling for realized sales prices below $40 per barrel.

But if you couldn’t tell by the rising fuel prices at the pump, oil has mounted a strong comeback. Benchmark crude prices have retaken the $80 per barrel level… 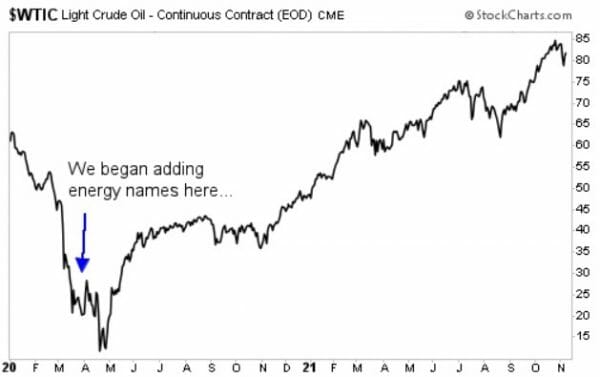 My point in rehashing this isn’t to simply highlight how far prices have rallied. Instead, I want to talk about some of the key lessons to be learned from some of the big winners we’ve found in this space – and whether this is still a viable hunting ground for investors today.

To examine this, and help investors decide for themselves, I want to take a look at two timely positions we took back then. We’ll see how far we’ve come with these names, and look at whether there might be any meat left on the bone for investors today…

ConocoPhillips (COP): Firing On All Cylinders

Even when prices were below $30, ConocoPhillips (NYSE: COP) still managed to deliver a decent $300 million quarterly profit… a testament to ongoing efforts to rein in spending and lower breakeven levels.

That being said, production has still grown to 1.5 million barrels per day, an increase of 566,000 from a year ago. Couple that increased output with a doubling of prices, and you can imagine the impact on the bottom line. Operating cash flows for the period soared to $4.0 billion. About $1.3 billion of that went towards necessary capital spending, leaving $2.7 billion in pure free cash flow (FCF) last quarter.

Management generously shared $1.2 billion of that with stockholders, split 50/50 between dividends and share repurchases. For the full year, the company intends to return more than $6 billion to investors. 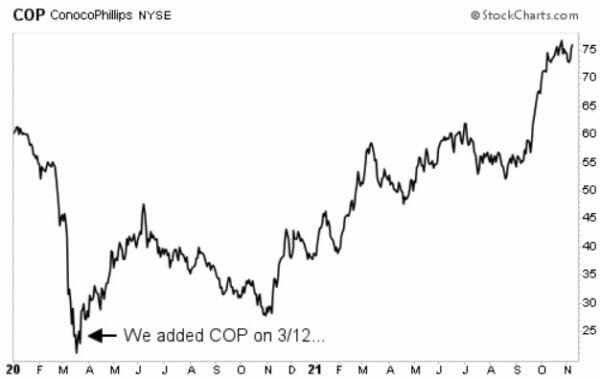 ConocoPhillips recently laid out an ambitious 10-year outlook and agenda. Among other goals, the company expects to return $65 billion to shareholders by 2031. And it will do so entirely with internally generated cash. Free cash flows are expected to total $70 billion over the period.

Incidentally, those projections are based on $50 WTI oil – nearly 40% below current levels.

Since then, the company has aggressively expanded its Permian territory, acquiring more than a quarter-million acres in the fertile West Texas basin. This purchase will also boost production by about 200,000 barrels per day. Management anticipates these assets to be “highly accretive” to the aforementioned ten-year plan.

As a result, the board has already just approved a 7% increase in the quarterly dividend to $0.46 per share.

Oneok (OKE): One Of My Favorite Midstream Plays

I first established a position in midstream energy player Oneok (NYSE: OKE) in March 2020, the darkest days of the Covid bear market.

This normally steady $70 stock was suddenly cut in half to $35. But as Warren Buffett councils, it’s often smart to be greedy when others are fearful. Indeed, this was one of those occasions.

As I explained at the time, 98% of Oneok’s natural gas transportation capacity was spoken for, and most of its limited commodity exposure was protected by hedges. Now, that certainly doesn’t mean it was smooth sailing. Among other problems, a steep falloff in Bakken Shale production took a bite out of Oneok’s regional gathering and processing demand.

That’s one of the reasons why management pared back last year’s EBITDA guidance from $3.2 billion to $2.8 billion. Yet, that 12% decline was already reflected in the stock’s 50% decline.

In any case, I knew Oneok’s entrenched assets (including pipelines that feed hungry coastal petrochemical plants) would cycle back to full strength sooner or later. In the meantime, I decided to look past the temporary headwinds – which had turned a 5% dividend yield into 10%.

Flash forward to today. Quarterly earnings in the firm’s natural gas gathering and processing segment are running double the levels from this time last year. And the volume of natural gas liquids (NGLs) passing through Oneok’s Rocky Mountain unit (the one most affected by the slowdown) has rebounded by 86%. Management is forecasting EBITDA to top out as high as $3.3 billion this year – about $100 million north of what the company was expecting to deliver before the pandemic. 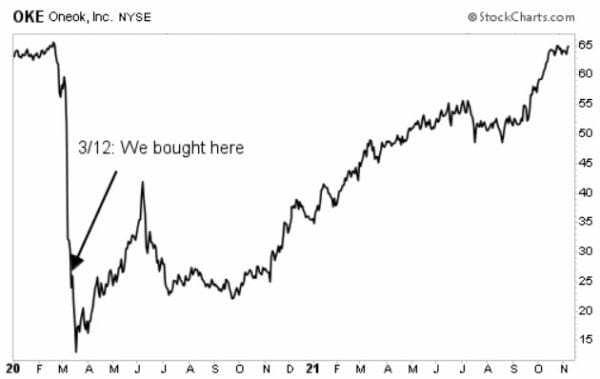 Through it all, Oneok has maintained its $0.94 per share quarterly dividend distribution. And year-to-date, the $800 million in payments have been covered by $1.2 billion in distributable cash flow (DCF) – meaning the company has met its generous distribution with $400 million to spare.

Oneok’s business is firmly back on track, and the shares have rebounded accordingly. I am now sitting on a healthy 141% total return.

Back in March of 2020, I began telling my High-Yield Investing readers that it was time to dive back into the market – and we paid particular attention to the energy space. As you can see, those moves have paid off for us handsomely.

The big question now, of course, is whether the energy sector is still worth your attention long-term – particularly if you missed the rally. After all, we know that prices could retreat from these levels. And we also know that the calls for “greener” technologies are growing louder by the day.

But the world isn’t going to suddenly stop on a dime and stop using oil and natural gas, either. And our experience with these two big winners shows why I think this sector is still worth a look.

You see, a decade ago, positive earnings for any oil major would have been impossible with sub-$30 oil. But many producers made a strategic shift towards profitability over growth. Capital expenditures were optimized, and there is far more focus these days on returning excess cash to shareholders rather than pumping it back into the ground.

COP was right at the forefront of this movement. Moves like this not only ended up saving some of the names in this sector from devastating losses, but it may have set the template for finding winners in this space in the years to come.

I consider COP a great core holding. But the shares have nearly tripled since my initial recommendation in March 2020, driving the yield below 2.5%. If you’re looking for income and didn’t add this name when prices were lower, then it may be prudent to wait for a pullback.

As for OKE, it is still modestly undervalued but isn’t the screaming bargain it once was. I will happily keep collecting a 13% yield-on-cost, but if you missed out on this one, you may want to add it to your watchlist.

The bigger lesson with this example, is that midstream players like this should be less sensitive to energy price swings. The operative word here is should. But the need for energy infrastructure isn’t going to disappear any time soon. So if you ever see a major selloff in the energy sector, then names like this are worth a look.

P.S. In this low-rate environment, it’s been tougher than ever for investors to find high income. But the opportunities are out there, if you know where to look…

In my latest report, you’ll find 5 “bulletproof” high-yield stocks that you can own for the long-term — picks that are so solid, they’ve weathered every dip and crash over the last 20 years and still handed out massive gains.