Why I’m Not Worried About Interest Rates And Tech Stocks…

Back in October, I told my premium readers that my indicators were suggesting that the bull market was back. Since then, all three major indices went on to hit new all-time highs. The S&P 500 and tech-heavy Nasdaq led the charge, climbing over 3% and 6%, respectively, before pulling back recently.

As we entered last week, however, we witnessed some heavy selling in many of the high-growth tech names. The Nasdaq shed nearly 3% in just two days. Then, on Friday all hell seemed to break loose, and all the major averages lost around 2% of their value.

As of today, it looks like all the averages have a good chance of recovering much of those Friday losses, which were sparked by a new variant (named “Omnicron”) of Covid.

But here’s the thing… We just don’t know all that much about Omnicron yet. Another reason we’re likely seeing bigger swings in the markets is simply because of the shortened holiday week. Markets were closed on Thursday, November 25 for Thanksgiving Day, and closed early (1:00 pm EST) on Friday, November 26.

So before we panic, let’s save the speculation around this new variant for another day until scientists know more. Instead, lets consider what was causing some of the selling pressure beforehand, particularly with tech stocks.

Remember, that selling came on the heels of Jerome Powell’s nomination to continue as Federal Reserve Chairman. And aside from Covid, the question at the top of most people’s minds is how soon the Federal Reserve will begin to raise interest rates — and how this might affect the high-growth tech names that have performed so well recently.

Higher rates are theoretically bad for tech stocks. They trade at higher earnings multiples, and higher rates reduce the value of those future earnings. And while that may slow the growth in tech stocks, I still think tech will be one of the top-performing sectors in years to come.

To understand this, consider the last time the Fed began raising rates at the end of 2015 and in early 2016. Yes, tech stocks did stumble (presumably on the same interest rate assumption). But then they got back on track and did just fine… 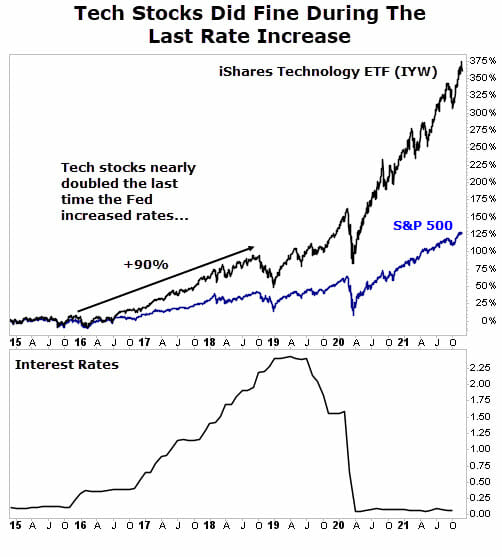 As you can see, the iShares Technology ETF (NYSE: IYW) ripped off a 90% return in three years after the Fed began increasing interest rates. Of course, that doesn’t mean it’ll happen again, but there’s no denying the growth that’s happening in the tech sector right now, and I don’t think interest rates will slow that growth down.

Once investors put the interest rate worries behind them, the next big focus will likely be on Black Friday (and Cyber Monday) sales. Consumer spending has been strong in recent months, and I expect that to continue through the holiday shopping season. Although, one major hurdle that will remain is the current supply-chain problems, so that’s something to keep an eye on.

As we enter the final month of the year, I expect a nice “Santa Claus” rally to finish off a rather strong year for the markets. The year-to-date return for the S&P 500 is 24%, with the Nasdaq at around 23%, and the Dow Jones coming in at around 15% as of this writing.

So before you start to panic just yet, remember that we’ve had an amazing year in the market so far. There are plenty of reasons to be optimistic for the medium and long-term, so it’s best to remain calm. Keep an eye on the market, but don’t let the volatility get to you, and don’t buy into the fear-driven headlines about interest rates either.

P.S. By now, everyone knows about the furious competition taking place to see who will take the top spot in space. We think Elon Musk is in the lead right now, thanks to his latest brainchild — Starlink — that’s about to go “live” soon…