If you don’t follow the financial news as closely as I do, then you could probably tell from sagging gas prices at the pump…

Oil prices have retreated sharply the past couple of weeks. After topping $85 per barrel for the first time in seven years, benchmark West Texas Intermediate (WTI) prices have suddenly dipped back below the $70 level.

You probably know the culprit. Fears of a new Covid variant (Omicron) popping across Africa have rattled investors and government leaders alike. According to Reuters, 56 countries have already implemented heightened testing measures, with some (including Japan) suspending incoming air travel from affected regions altogether.

Early indications suggest that Omicron could have relatively mild health implications compared to other variants.

On Wednesday, the CDC confirmed the first case of the variant in California. And today, the second case was found in a Minnesota man who traveled to New York recently. You can bet there will be more to follow, so we’ll find out soon enough just how severe this variant is.

Nevertheless, the spread has put officials on high alert, reigniting fears that this newest contagious threat could blossom into yet another round of widespread quarantines and travel restrictions.

Just when the global economy was getting back on its feet.

Investors have been weighing the potential impact, rushing out of economically-sensitive areas and seeking safe haven in stay-at-home stocks. Needless to say, the energy sector has been punished. 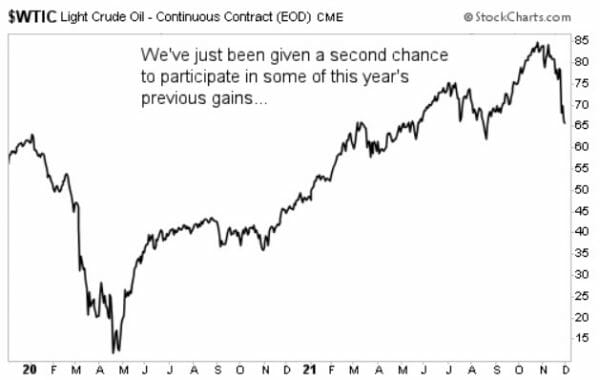 Remember that? Most of us would like to forget. The upside, though, was that it set the stage for an incredible rally – one that my premium readers and I took full advantage of. This time around, prices declined by about 25% before beginning to rebound. And I suspect the rebound will continue, offering investors a second chance to capture some of the upside in energy prices that they may have missed previously.

Obviously, grounded flights will bite into oil consumption. The question is how much – and for how long. I’ve seen one analysis showing that a crude oil pullback of this magnitude essentially prices in a complete halt to all global air travel for three months.

In case there’s any doubt, let me make my opinion clear: I don’t think we’ll see such a scenario, which would mean the kneejerk reaction went too far.

In fact, the uncertainty surrounding Omicron could actually be more help than a hindrance to oil investors. You see, the OPEC-plus countries just happened to be convening this week. They’ve been contemplating plans to boost their output by 400,000 barrels per day, starting next month.

Now, with prices collapsing, many thought the cartel might rethink that strategy. But they’re not.

As we speak, oil prices are rallying on the news, which further reinforces the notion that this whole thing may be a little overblown. You can be sure that if Omicron was a serious threat and global travel would grind to a halt that member countries would postpone or even cancel any near-term supply increase.

I’m not alone in my opinion on oil prices, either. Goldman Sachs analysts have cited the selloff as overdone. JP Morgan has gone even further, issuing a bullish outlook calling for oil to soar to $125 per barrel next year on tightening supplies. That assessment is predicated on the notion that OPEC has far less spare capacity than previously thought.

While Omicron is still a wild card, I tend to agree that the threat to oil demand has been exaggerated. On the positive side, overblown fears have temporarily made some names in this space even more attractive.

While the next few weeks could remain choppy, I believe the rewards outweigh the risks here. And I plan to take full advantage of the selloff.

In fact, I found a small Texas company that just discovered one of the largest natural oil reserves of ALL-TIME…

All told, this company is set to uncork nearly a billion barrels of oil — all while unleashing a once-in-a-lifetime opportunity for massive gains.

But if you want in, you need to make your move now… because this company could have their name splashed across the financial news any day now, sending share prices surging, and slamming the door shut on this opportunity for good.