Do you remember what it was like before March 2020? It feels like a lifetime, but we’re not even two years removed from when the Covid pandemic came around.

We all know the rest of the story. Global lockdowns. Deserted streets and highways. Empty parking lots. Vacant airport terminals.

It was also one of the wildest times to ever be an investor in the energy sector.

With just about all non-essential travel shut down, oil consumption nose-dived, and storage tanks quickly filled to capacity. Predictably, prices fell into the abyss. At one point, crude oil futures contracts dipped into negative territory. That’s right. Sellers literally had to pay buyers to take the stuff off their hands. Midstream movers and shakers suffered as well. It was an unprecedented collapse for the energy sector.

Of course, the pandemic affected us all in one way or another. Some suffered more than others. But for people in oil-rich boomtowns like Midland, Texas, the effects of the energy downturn were looking downright catastrophic.

Pundits were quick to declare that shale era was over. Oil and gas seemed to be down for the count, and activity in once humming supply basins from Colorado to Pennsylvania ground to a halt.

West Texas was no exception. Thousands of oilfield “roughnecks” were laid off or put on standby, leaving normally bustling shops and restaurants in cities like Midland and Odessa unusually quiet.

Even bigger players were left licking their wounds and retrenching. By August 2020, Occidental Petroleum (NYSE: OXY) had just one lonely drilling rig running.

But it didn’t last long… 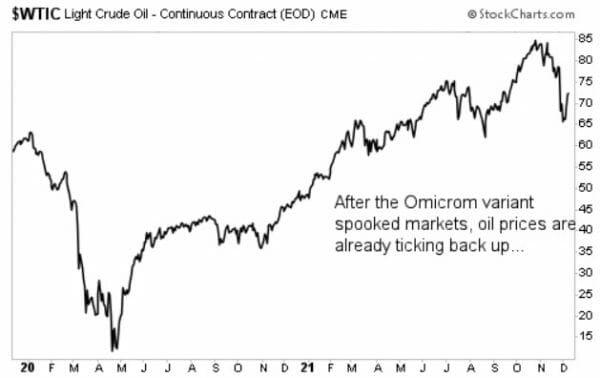 The Rumors Of Oil’s Demise Were Greatly Exaggerated

Within a few months, the worst was over. Consumers started to emerge from hibernation, and the global economy once again grew thirsty for oil. Meanwhile, suppliers had effectively turned down the production spigot in response to the weak pricing environment. Budgets were slashed. Wells were left uncompleted.

By late May, domestic output had slipped to 11.6 million barrels per day, down markedly from a pre-crash peak of 13 million. So it didn’t take long for the once-brimming inventory stockpiles to recede. In short, the supply/demand imbalance began to ease. And the market responded appropriately, doubling benchmark Brent crude prices to $35 per barrel from a low of $17.

Consider this… At one point, production rates in the oil-rich Permian basin of West Texas and New Mexico hit 4,913,000 barrels per day before the pandemic. We’re within spitting distance of hitting those rates today.

Not only that, but the number of drilling rigs deployed in the hunt for new oil has more than doubled nationwide, from 246 to 569 in the latest rig count, published by Baker Hughes.

283 of those rigs are deployed in the Permian. And rightly so. Currently, about 40% of all domestic production comes from this oil-soaked formation. It’s the most productive oilfield on the planet — and it’s not about to run dry anytime soon. The US Geological Society estimates there are 46 billion barrels of recoverable oil reserves and 281 trillion cubic feet of natural gas still waiting underground.

How We Profited From Oil’s Historic Rebound…

Over at Takeover Trader, I told my premium readers in late May that it was time to step in to the oil & gas sector, particularly with some of the independent exploration and production names.

Our favorite of the group, at the time, was Pioneer Natural Resources (NYSE: PXD).

Pioneer wasn’t immune to the pandemic. But it maintained one of the strongest, investment-grade balance sheets in the industry. Managers and board members even slashed their own paychecks by 70% to preserve cash during the crisis (you don’t see that attitude every day).

More importantly, Pioneer was sitting on 680,000 acres in the heart of the Permian Basin. And even with oil at $35, the lean company could still turn a healthy profit while others were underwater. How healthy? Well, at that price, the company expected to generate $2.3 billion in annual operating cash flow — enough to cover all its spending needs with $800 million in free cash flow (FCF) left to spare.

So I posed a question… If Pioneer can gush cash at $35 per barrel, imagine what it can do if prices recover to $50?

At the time, it was purely hypothetical. But here we are 18 months later, and oil has not only rallied back to $50 – but it hit a 7-year peak of $80 before retreating back recently. Needless to say, our stake in PDX has paid off nicely – delivering a 98% gain. 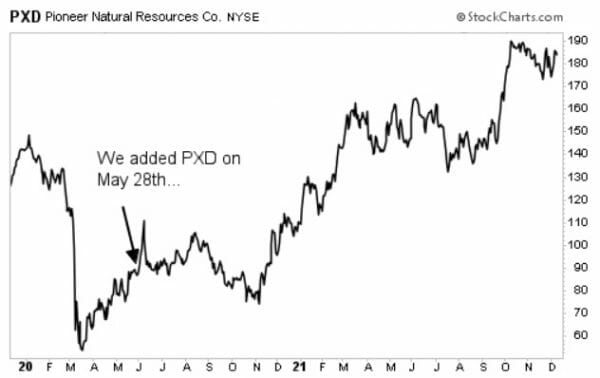 My New Prediction For The Energy Sector

Now, you can still probably do well with PXD. The Omicron variant of Covid has spooked markets and sent the price of West Texas Intermediate crude sharply lower. But with preliminary signs indicating that the variant’s effects are relatively mild, prices are already beginning to rebound.

But this isn’t really about Covid. Or Pioneer for that matter. There’s a much larger trend taking shape…

If you think all of this is just part of a temporary reset “back to normal,” think again… Yes, alternative energy sources will continue to expand. But so will oil consumption.

According to the Department of Energy, global oil consumption is expected to rebound to 97.5 million barrels per day this year, versus an average of 92.4 million per day in 2020. And the world will be even thirstier for oil next year, with daily usage forecast to top 100 million barrels. And the International Energy Agency projects that demand will steadily climb through 2026.

That means the oil will flow from the Permian for years to come. But that won’t be the only thing flowing… so will the M&A dollars. And over at Takeover Trader, we intend to profit from this trend…

I could run you through a laundry list of recent deals in the region. This swift price rebound has replenished exploration and production (E&P) budgets – and spurred drilling activity just about everywhere. But the Permian Basin has seen the fastest ramp-up, due in no small part to its low breakeven levels and superior well economics.

But I predict that’s just the beginning…

In fact, I just released a report detailing the massive wave of deals we’re likely to see in the coming months. And by getting in now before the rumor mill picks up, investors have the chance to pocket triple-digit gains, practically overnight.

To learn more about this opportunity — including my top pick to profit — go here now.