Last week, as I was wrapping up the last issue for my premium service, Maximum Profit, it was hard to believe that the end of 2021 was already at hand.

On January 6th, we saw people storm the U.S. capitol. Roughly one week later, one of the arguably craziest moments in stock market history began to unfold…

A determined group of amateur traders in a sub-forum of Reddit known as r/wallstreetbets conspired to take down a mighty hedge fund in Melvin Capital by purchasing shares of failing gaming retailer GameStop (NYSE: GME).

Melvin Capital (among other large investors) were short GameStop, which means they were betting that the stock would go down. The wallstreetbets group began purchasing GME stock to not only drive the price of the stock up but also reduce the number of available GameStop shares. This made it difficult for short sellers to find stock to buy or cover their short positions.

Between January 12 and January 27, the value of GameStop soared more than 1,600%, which crushed short sellers. 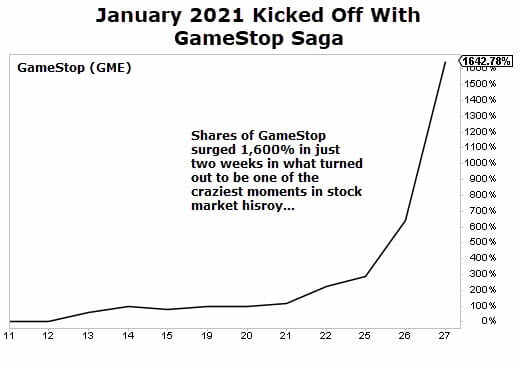 Melvin Capital lost 53% in January alone. It had to be bailed out by fellow hedge funds, Citadel and Point 72, which infused close to $3 billion into Melvin Capital.

It was also a big year for the commercial space race. We watched Richard Branson become the first person to ride into space aboard a rocket his company, Virgin Galactic, developed. Nine days later, Amazon founder Jeff Bezos took a joy ride to the outskirts of space in his Blue Origin rocket.

In other news, in February an apocalyptic winter blizzard and sub-zero temperatures invaded the deep south. One of the largest US fuel pipelines was shut down after a ransomware cyberattack.

We also saw the (disastrous) withdrawal from Afghanistan, only to see the Taliban take over the country two weeks later.

Facebook (Nasdaq: FB) came under attack (again) as a whistleblower released tens of thousands of pages of internal research documents indicating the company was aware of various problems caused by its apps. Facebook went on to change its name to Meta.

Of course, this is all happened against the backdrop of Covid, supply chain issues, the “great resignation,” and the highest inflation we’ve seen in nearly 40 years.

How did the markets handle all of this battiness? Like it forgot to read the paper… 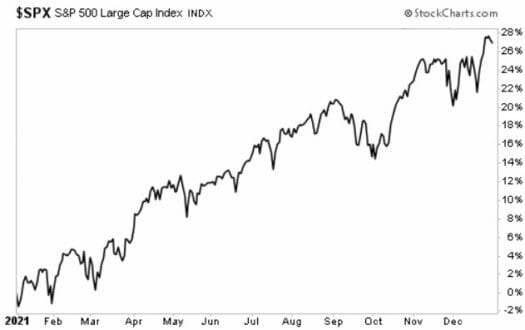 As I told my Maximum Profit subscribers, there are very few years when I’m extremely satisfied with how we did. I’m always looking to improve, get better, and grow. My mindset is if you’re not growing, you’re dying. This is true whether it’s investing or in life.

It wasn’t that we had a terrible year in terms of performance. We did close out of some massive winners this year.

For example, we closed out of eXp World Holdings (Nasdaq: EXPI) for a quick 44% gain in January. We held the stock for only two months, and this trade crushed the market’s 13% performance over the same period.

Then in February, we booked our profits in Digital Turbine (Nasdaq: APPS), as shares rallied 89%. Once again, we crushed the S&P 500’s meager 4% return. 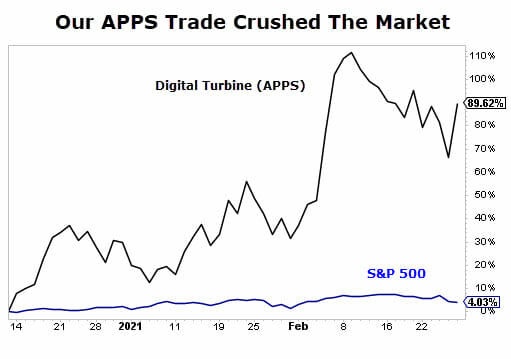 In March, we closed out of another real estate-related company, Zillow Group (Nasdaq: ZG), after a quick 65% return in six months. For comparison, the S&P 500 returned 12%. 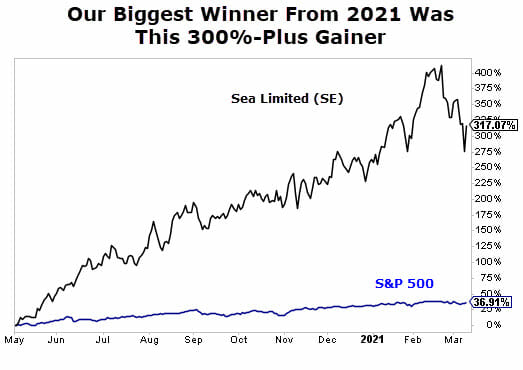 But despite the stout performances from all three major indices this year, it was a rowdy ride. Especially for tech stocks, which we traded heavily last year.

Take a look at the tech-heavy Nasdaq. Even though it returned 21% last year, getting there required investors to pop some Dramamine pills. We saw four sizable pullbacks in the Nasdaq throughout the year. We would see a big rally, then the rug would get yanked out from under us and the index would tumble.

We had a lot of trades rally big, and then slide just as fast. And while we were able to capture a big portion of the gains, there was a lot left to be desired. Last year, our average loser lost us 14.5%, which is a bit higher than I’d like to see, and higher than our historical average, which runs around 9%. But I’m willing to bet that this beats the average investor by a mile.

Of course, the holy grail would be to sell at the tippy top, but that’s just not realistic. I am always testing different strategies that will help us capture the most upside, but I have yet to find something that consistently beats the system we use over at Maximum Profit.

Looking back, I’m satisfied with how 2021 shaped up for us. But we can always do better. So I will continue to test and refine my investing strategy, and a big part of that will be minimizing risk and keeping losses small.

Longtime readers know that I constantly pound the table on this. Remember, it’s extremely difficult to recover from a big loss — a 50% loss, requires a 100% return just to break even.

If you haven’t already, take a look at how your portfolio performed last year. Ask yourself whether you’re satisfied or not, and what you could do better. Then, do something about it.

In the meantime, one thing you should watch closely in 2022 is the commercial space race…

If you thought last year was big, just wait until you see what’s next. According to my research, Elon Musk’s latest space project is going to blow the race wide open. And it could make a fortune for investors who get in early…

Get all the details right here.