Earlier this week, I told you that my colleague Jimmy Butts and his team over at Top Stock Advisor just released their latest annual report of predictions for the coming year.

We plan to cover these predictions in more detail in the weeks ahead, but first I wanted to sit down with Jimmy and get his take on where the market stands right now. As you’ll see in a moment, Jimmy sees more than a few red flags that we need to be aware of. But despite this, there will be plenty of chances to profit…

In 2021, after all was said and done, how did you and your readers shape up in terms of performance over at Top Stock Advisor? Are you happy with how things turned out?

But as nice as it is to see our portfolio swell in size, this can often lead to an inflation of our egos. It leads to a belief that we have “conquered” the market, or that our investment acumen is much stronger than it really is.

In other words, everybody thinks they’re a genius in times like this. Don’t get me wrong, I’m proud of the performance, but ut I’m not oblivious to the fact that we’ve benefitted from a mighty bull market — fueled in large part by the Fed’s easy-money policies.

Many stocks have seen tremendous gains in a short amount of time — stretching valuations to record highs. And those lofty valuations haven’t deterred investors one bit. After all, had you “bought the dip” anytime we had market weakness, you’d have done very well for yourself.

Now that we’re entering a new year, everyone wants to know what lies ahead. We’ll get to your annual predictions report in just a second, but are you bullish on 2022 overall?

Of course, no one really knows, but that doesn’t stop experts from throwing out their predictions, does it? And like you said, we just released our own predictions report – which focuses on specific opportunities rather than the larger market.

But if you look at year-end estimates for the S&P 500 from various Wall Street analysts, you’ll see that most are quite bullish on stocks this year. Many Wall Street firms predict that the S&P 500 will return nearly 10% in 2022.

Now, I hope they are right, but I’m a bit more concerned. To be clear, I’m not a doom-and-gloomer. But there are certainly warning signs that indicate that we could be in for a very rude awakening – with the elephant in the room being the ending of the Fed’s massive money printing “experiment,” and the eventual hike in interest rates.

Why should we be concerned about this? After all, we’ve seen tightening cycles before…

You’re right. But historically, when the Fed began tightening, stocks fall… a lot.

For example, when the 2001-2002 tech bubble collapsed following a bout of Fed tightening, all tech stocks plummeted. Nothing was immune. The Nasdaq plunged 80% and many of the most beloved tech stocks fell much more.

If that example is too drastic, then consider October 2014 when the Fed ended its large-scale asset purchase program, better known as “QE.” Stocks initially dipped about 8% before making new highs and then struggled mightily throughout 2015.

In late 2017 the Fed began reducing its balance sheet, and again stocks struggled. The S&P 500 peaked in January 2018, then investors endured a stagnant year that ended with the S&P 500 plunging nearly 20%.

Stocks found their footing in 2019, as investors came to grips with the end of the easy money era. Then of course Covid struck, stocks quickly tanked, and the Fed stepped back in. 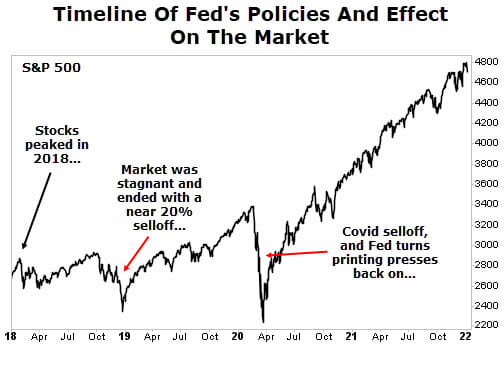 Now, here’s where I’m going with all of this. Take a look at the chart below, which shows the Fed’s balance sheet through the last few years of these QE experiments. You can see where the balance sheet went from less than $900 billion in 2008 to more than $8.7 trillion today. 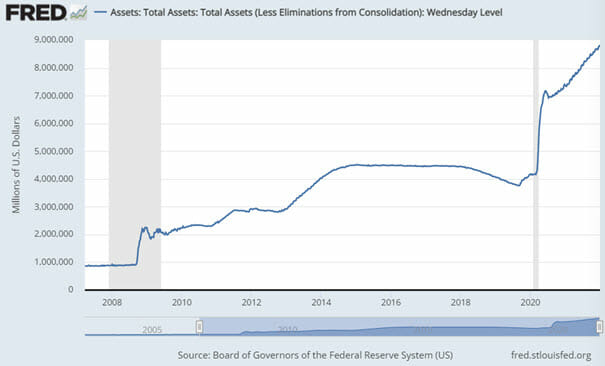 If stocks didn’t like the last handful of times the Fed terminated its QE programs, how do you think it’s going to like this current one?

Are there other warning signs you’re seeing?

Sure. So far, the market has been able to ignore all sorts of warning signs. The highest inflation in three decades is just one of them, for example.

There’s also record stock valuations: the cyclically adjusted P/E ratio (CAPE) for the S&P 500 is sitting at nearly 40 — the second-highest level in US history after it peaked at 44 in early 2000.

Then you have the wild speculation in meme stocks, IPOs, NFTs, and cryptos, the public’s highest percentage of equity holdings relative to total assets in 70 years, and soaring margin debt. Record margin debt ($936 billion – up 42% year-over-year) is rising at a faster pace than in 1999.

And if that wasn’t enough, consider this fun fact from Lawrence Goodman — president of the Center for Financial Stability.

In a Wall Street Journal article, he wrote: “Since 1970, negative real Treasury bond yields typically have corresponded with a plunging stock market. Example: Yields reached a low of negative 4.9% in 1974. During that year, the S&P 500 fell 37%. Today, real yields of negative 4.7% are the second-lowest since 1970, yet the S&P 500 has risen nearly 30% over the past year.”

The warning bells and whistles are sounding, and yet investors are ignoring all of them.

So what should we do about all of this? Is it time to start selling?

This isn’t meant to scare our readers. And I could be completely wrong. The bull market could certainly continue marching on. But history has repeatedly shown us that when the Fed tightens the major indexes fall sharply.

This doesn’t mean we should abandon our holdings, move to cash, and head for the hills. Having some dry powder on hand is one thing, but if inflation continues at this rapid pace, cash will quickly lose value sitting in a savings account.

Instead, what I’m telling my Top Stock Advisor readers is that we will want to be in wonderful companies that generate enormous profits. And thankfully, our portfolio is chock full of stocks like this already. And if we do see a selloff, then we look at this as an opportunity to buy more of these great companies.

Along with that, gold isn’t a bad idea, either. In fact, we add some exposure to our portfolio just a few days ago. Gold ended the year down 4.2%, but I think it’ll see a big turnaround in 2022.

You just released your annual Predictions report for 2022. How do the picks in this report fit into your overall view of the market?

Look, I know I sounded a little pessimistic today. But here’s what’s also going on…

Every day there’s a ton of innovation taking place. There are also rare events that tend to “shock” areas of the market – or the world, for that matter. If we can get out ahead of the curve a little bit to get a sense of what’s going on, that’s the first step. Then, we prepare to profit.

That’s what this report is all about. If just a couple of the predictions in our report come true, they could make a lot of money for investors.

Now, I want to make one thing clear… You shouldn’t bet the farm on these. They are, after all, predictions. But that’s what makes this fun. You may not always be right. But if you allocate properly, all we have to do is be in early on a couple of ideas before the rest of the crowd to make some truly spectacular returns.

I’d like to thank Jimmy for joining me today. We’ll have much more to cover about the Fed, the overall market, and Jimmy’s predictions, in future issues.

In the meantime, as we mentioned, Jimmy’s brand-new report just went out to his subscribers, and it’s already creating a buzz with readers.

If history is any guide, this could be the most profitable thing you read all year.