We’re Getting Serious About Cryptocurrency In 2022. Are You?

My longtime premium readers know that I like to talk about the importance of keeping an open mind.

It’s easier said than done, of course, but I try to do my best. But the truth is that deep down we all have a tendency to quickly categorize. As we move throughout our day consuming information, working, experiencing… we’re making assessments. Passing judgment. It’s instant and reflexive.

When you meet someone, you immediately form a first impression. You might try to figure where they stand politically, morally, perhaps religiously. You quickly form an opinion about a person, even though you just met them.

Our brains are just wired that way. It helps us assess whether a person can be trusted, or whether they’re a threat. A long time ago in human history, when the stakes were a lot higher, it served us pretty well.

But today, those first impressions can be tough to overcome — especially when it comes to investing.

Today, if someone brings up an investment in Tesla (Nasdaq: TSLA), it’s sure to bring an immediate opinion. It might be good or bad, but the popular stock elicits a lot of emotion and assumed beliefs about the company.

Regardless of how hard we try to remain open-minded when it comes to investing (and life), we all have prejudices regarding certain stocks and industries. And it’s hard to change those beliefs. It feels like an admission of being wrong. Many stubborn folks would rather miss an opportunity to profit than change their mind about something.

If you can, I’d like you to keep an open mind with what I’m about to share with you today. Think of it as something of a confession. A few days ago, I shared this with my Top Stock Advisor premium subscribers. And just like them, I’m sure you have an opinion formed already on what I’m about to cover.

Just remember… Preconceived beliefs can often blind us to what could turn out to be a great investment.

My First Impression Of Bitcoin…

When Bitcoin began popping up in earnest in 2010, I shrugged it off. Thought it was a fad. Another tulip-mania.

Those beliefs hardened in February 2011. That was the date one Bitcoin was worth one dollar, a major milestone as the cryptocurrency reached parity with the world’s leading sovereign nation. (For the record, a $100 investment in bitcoin back then would be worth $4.2 million today.)

This is when I should have really begun studying and understanding bitcoin. But instead, I simply mocked it as a kind of digital tulip. A Ponzi scheme even. Sure, I looked into the technology behind bitcoin — the blockchain — and realized the potential there. But I still wasn’t convinced that bitcoin had a place in our future.

The following year it collapsed to less than $5,000. The nostalgia — at least in the media — wore off. But as it fell out of favor with most investors and the media, I quietly began to look into it. I wanted to understand how and why so many people were willing to trust bitcoin and were eager to use it.

You see, my preconceived (negative) perception slowly changed. I was just slow to adapt to this evolving technology. I’m glad I finally got in. But you can see what might have happened if I had been able to change my mind sooner… 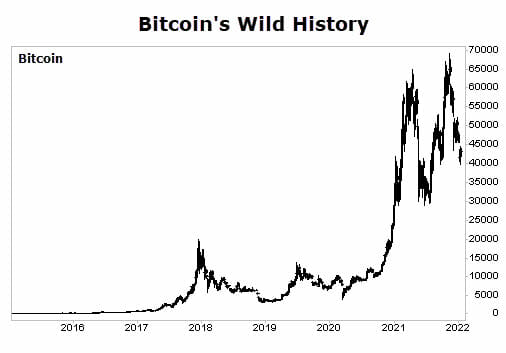 We’re Getting Serious About Cryptocurrency

If you’re one of the folks who cringe whenever bitcoin or cryptocurrencies are brought up, I want to encourage you to reconsider. Ideally, with an open mind. I even urge you to look into the technology yourself — doing so without assumptions.

Many times, our negative impressions about things are rooted in our lack of understanding.

I’m not going to dive deep into bitcoin and cryptocurrencies today. That’s not the purpose of today’s essay. But I will tell you that I will be covering cryptocurrencies more often. After all, I’ve been in this space personally for a little while now. So it would be doing a disservice if I didn’t share some of my experiences and knowledge with my readers.

Make no mistake, though… Over at Top Stock Advisor, our primary focus will continue to be finding and recommending wonderful companies that are trading at reasonable prices. In that respect, nothing will change. But I do hope to expose my readers (those who are willing) to the world of cryptocurrency. And if you haven’t already, I hope you’ll at least consider dipping your toe in the water, too.

I firmly believe that the value creation made possible by the blockchain has only just begun. And it will unlock enormous opportunities — opportunities that I feel obligated to share with you.

Make no mistake, bitcoin may be the most fascinating and controversial development in money and finance in generations… if not centuries. And the underlying blockchain technology has the potential to revolutionize aspects of our economy, upending many established companies — and even entire industries.

The only question is… will you keep an open mind and evolve? Or will you stand rooted in your first assessment of the technology and watch it pass you by?

Editor’s Note: I just released a BIG prediction about cryptocurrencies in my annual list of predictions for 2022…

If you read last year’s predictions, you know we told investors we were bullish on Ethereum — and it went on to deliver 400% gains.

My team and I predict cryptocurrencies will surge again in 2022… but the big winner won’t be Bitcoin, Binance, or Ethereum. We think another crypto is now a better bet for new investors. It is 321 times faster than its prime competitor and we think it could surpass it in value by the end of 2022.

Go here to learn more about this new cryptocurrency and the rest of my predictions now.