Two Things You Need In The Market Right Now: Patience And Discipline

I’m not going to sugar-coat this… This is a tough market environment to trade.

I’ve seen this before, and I’ll give it to you straight. Not many traders will be able to stomach it. We will see a lot of traders fold their cards, becoming “buy and fold” investors.

I don’t say this to scare you, but rather to say… Don’t let this happen to you.

The biggest reason traders fail, or blow up their accounts, is because they don’t have any sell signals or stop losses in place. And if they do, they usually don’t have the discipline to follow them. They let small losers dwarf into big ones.

When it comes to selling a stock, it’s easy to kick the can down the road. The voice in the back of our heads says, “sell tomorrow, when the stock turns green.” If the stock is still trading down the following day, we throw up our hands and quickly log out of our accounts.

If the stock happens to be trading in the green the next day, most people still never sell. That green day gives them hope that the stock is turning around.

You don’t want to be the one left holding the bag. Remain disciplined and stick to your sell signals. And if you can’t stomach the volatility, then that’s a sure sign that you have too much exposure to equities.

If you’ve decided to ignore some of your sell signals, holding out hope that many of your holdings are near the bottom… Well, I have some bad news: they can fall a lot further from here.

I bring this up especially when we look at the tech-heavy Nasdaq, which has officially entered correction territory (a decline of 10% from highs).

Some of our favorite tech plays have rewarded handsomely us over the years. And that’s great. But here’s a dirty little secret about secular market leaders (like tech stocks) from famed trader Mark Minervini… once they put in a major top, there’s a 50% chance that they will decline by 80%, and an 80% chance they will decline by 50%.

I want you to think about this for a second. After a stock or industry makes a major move upward over a long time, it will almost assuredly drop by 50% when it ultimately tops out. And it’s a flip of the coin whether that downward move will be as much as 80%.

Don’t believe me? Think about what led markets higher in the late ’90s. Internet stocks. When they finally topped out, they came crashing back to earth.

Just look at Cisco Systems (Nasdaq: CSCO). Shares rocketed higher. A 10-bagger. But when it finally topped out in March 2000, shares lost nearly 90%… 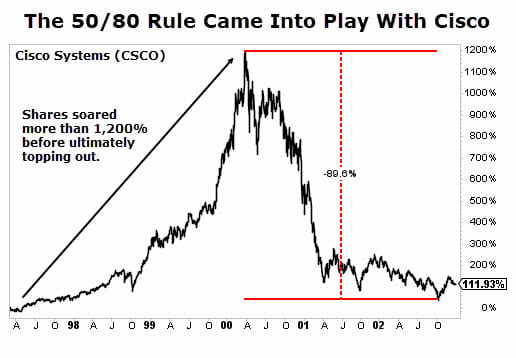 Am I cherry-picking one stock during a major crash? Sure. Maybe. But this isn’t a one-time deal. Fast-forward to the lead-up to 2008. What were the secular growth stocks during this time? Banks and financials. They were making a grip on the housing boom. But once again, when the music stopped it wasn’t pretty. 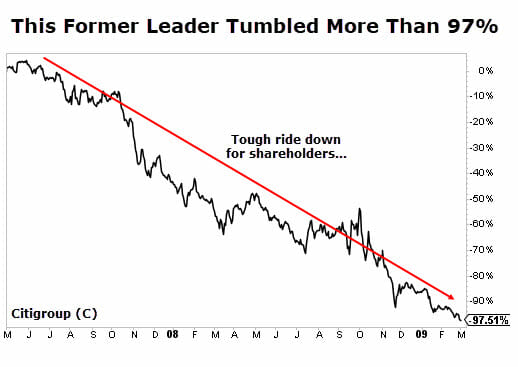 Coming out of the financial crisis the new growth leader was the innovation coming out of the oil industry. Recall, that fracking allowed America to become a global leader in oil.

The oil boom was well underway and these stocks surged higher. We made good money from this sector in both of my premium newsletters, but especially over at my trading service, Maximum Profit. But when this secular growth sector finally topped out, we followed our sell signals and escaped unscathed. Those who held onto “hope” lost their shirts.

We made a quick trade in oil and gas company Sasol Limited (NYSE: SSL). We didn’t make much on the trade (7.2%), but more importantly, we didn’t lose it all. 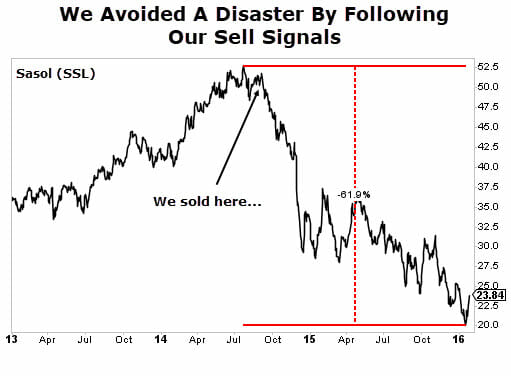 This is what having sell signals and stop-losses can do for you. Nobody thinks they need them — until they do.

After the energy sector fell apart, the tech industry picked up the pieces and has been the secular growth sector leading the market.

But I think the top is in for tech stocks, and we’re already seeing many former leaders posting big selloffs.

The point is that you don’t want to ride these stocks down. Follow your sell signals. If you don’t already have them, make them. Book profits, cut losses short, and never add to losers (no sense in throwing good money after bad).

The market’s next leader will reveal itself in time. I have a few ideas on where that will be — but for now, we need to remain patient and remain disciplined.

In the meantime, if you’re looking for growth opportunities in this market, then you need to check out my report of investment predictions for 2022…

While the top may be in for the tech sector, that doesn’t mean there aren’t other opportunities for mega-gains. You may remember last year’s report — our calls on copper, pipelines, crypto, and timber returned up to 391%… (and most of them are STILL a buy!)

Now, my team and I have just concluded three months of research — and released an a brand new set of predictions for the coming year that could turn a modest investment into small fortune.

To put it simply, these could be my most profitable predictions yet… Click here to learn more.