Another day, another bloodbath for tech stocks.

After suffering its worst week since the start of the pandemic, the Nasdaq is in freefall as I write this on Monday, shedding more than 550 points. The S&P is faring marginally better, sliding about 3% in percentage terms.

After officially being pummeled into correction territory, it looked like the tech sector might finally get a reprieve to close out last week. In fact, the Nasdaq was rallying more than 2% around mid-day on Thursday. But sentiment turned on a dime and selling intensified at the closing bell, erasing early gains and leaving the index down 1% on the session.

Then, on Friday, the tech sector took another hit on the chin, triggered in part by a 25% collapse in Netflix (Nasdaq: NFLX). The video streamer disappointed investors with weaker-than-expected subscriber growth numbers. Other media content owners fell in sympathy.

It was one of the worst intra-day swings (equivalent to more than 1,000 points on the Dow) in more than two years. I was reminded of a punch-drunk prizefighter getting up off the mat and trying to summon his strength, only to be felled again by a vicious upper-cut. 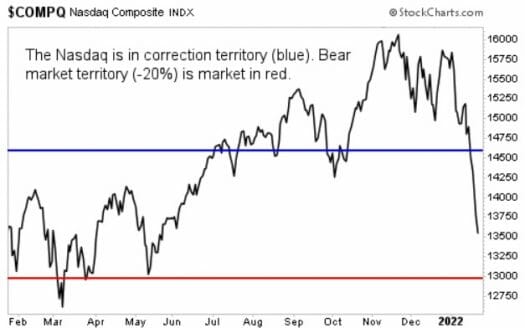 Make no mistake about it: It’s getting cold out there – and I’m not referring to the weather.

What Should We Do Now?

It wasn’t that long ago that investors were buying the dips. Now, they are doing the exact opposite, selling into any bouts of strength. Even the excitement over Microsoft’s (Nasdaq: MSFT) splashy $68 billion acquisition of video game maker Activision Blizzard (Nasdaq: ATVI) was fleeting last week.

To echo some comments I made earlier to my High-Yield Investing premium subscribers, this latest selloff seems to be motivated by lackluster earnings guidance. Yes, there is still plenty of angst regarding this week’s Fed policy meeting. But for now, rate concerns may be taking a backseat to decelerating earnings growth.

There are some big names on the docket this week, not the least of which is Apple (Nasdaq: AAPL). Fourth-quarter profits among S&P 500 firms are expected to rise 22% on average, according to FactSet. Unfortunately, these same companies appear unwilling (or unable) to make any financial pronouncements regarding the next quarter.

Of the 64 companies to check in thus far, only six have formally issued first-quarter guidance – and five were shy of analysts’ estimates. Unfortunately, as we saw with Netflix (Nasdaq: NFLX) on Friday, the market is not in a forgiving mood right now.

Throw in saber-rattling between the White House and the Kremlin over military posturing in Ukraine, and you can see why the tone has turned ominous. Investors are abandoning asset classes perceived as being risky. Witness the utter collapse in Bitcoin or the roughly-19% pullback in the small-cap sector.

As a reminder, I’ve repeatedly called attention to the rotation out of growth and into value. I still don’t think this process has fully run its course, as rampant speculation had left entire swaths of the market excessively overpriced. These recalibrations, while painful, are healthy.

[See more: How To Deal With The Market’s “Stealth Correction” Right Now]

Also, keep in mind that when markets re-price themselves, companies, private equity funds, and other big players like to go shopping. Acquisitions can happen anywhere, even stodgy department stores. Just ask Kohls (NYSE: KSS), which is soared more than 30% on Monday thanks to takeover speculation.

There will be a time to go on the offensive. But right now, swimming against this tide is counter-productive. My advice: Until we get more clarity regarding some of the macro concerns that are weighing on sentiment, it would be prudent to lock down a few of your big winners with stop losses.

Fortunately, defensive groups such as utilities, energy, and consumer staples (all well represented in our portfolio over at High-Yield Investing) have avoided most of the damage thus far. Also, this selloff is widening discounts on closed-end funds and driving many quality preferred stocks deeply below par value.

When the time comes, my subscribers and I will be ready to go on the offensive — and so should you. That’s exactly what we did in March of 2020 when the Covid selloff hit the markets – and we made out like bandits from that. I’m not saying a similar selloff will happen this time, but we still may have some great opportunities come our way.

As I said a couple of weeks ago, investors need to remember that it’s never been more important to have a stable of high-quality dividend payers in your portfolio.

History has repeatedly shown that quality dividend-paying stocks are the best way to build long-term wealth. And that’s where my latest report comes in…

My staff and I have put together full writeups on five of my favorite dividend payers. Each one of these “bulletproof” securities has a proven history of rewarding investors with higher payouts each and every year – no matter what else is going on in the market.

I consider these securities to be the elite of the elite. Go here to learn more about them now.