One Of My Favorite MLPs Just Made A Big Acquisition…

One of my favorite income machines has just acquired one of its smaller cross-town neighbors.

For those who missed it, I made the case for why income-hungry investors should take a serious look at MLPs in 2022 in this article. It’s one of the few areas of the market that still offer high yields – not to mention serious upside.

The thing is, the market seems to be completely uninterested in this (and other) MLPs right now. You might even think the days of growing payouts are in the rearview mirror. But thanks to this new acquisition, the prospects for even higher dividends in the future are looking brighter than ever.

EPD is one of the first names that come to mind when you think of the MLP space. Of course, when you own 50,000 miles of pipelines (enough to circle the planet twice) just about all other rivals will look small in comparison.

These vital conduits transport crude oil, natural gas, petrochemicals, and refined products such as gasoline. EPD’s network serves every major U.S. shale basin and connects to 90% of the refineries east of the Rocky Mountains.

The company also operates dozens of processing plants and storage facilities, as well as marine docks and export hubs. It’s particularly active in channeling natural gas to fractionation facilities and then pushing the resulting natural gas liquids (NGLs) to domestic and export markets. Millions of cubic feet of natural gas pass through EPD’s pipelines each day. About 14.6 million, to be precise.

And that number is about to grow. On January 10, Enterprise Products unveiled plans to acquire Navitas Midstream Partners for $3.25 billion. This purchase will plug one of the few holes in its portfolio, giving the company an established presence in the Midland Basin, the eastern wing of the mighty Permian. Centered around the West Texas town of Odessa, the Midland sub-basin contains some of the richest oil and gas deposits on the planet.

This is where huge producers such as Chevron have set up shop, pulling up nearly 2 million barrels of crude to the surface daily. There are 579 active drilling rigs running in the United States right now, and one-fifth of those are hunting in just one spot — the Midland Basin.

Aside from crude oil, the Midland region is also relinquishing about 5.8 billion cubic feet of natural gas per day. In the past, there simply wasn’t enough takeaway capacity to meet that output, so much of the gas was flared (simply burned off) once it reached the surface.

That’s where Navitas comes in. The company owns 1,750 miles of natural gas pipelines in the region, as well as processing plants that can handle over 1 billion cubic feet per day. These midstream assets are generally fee-based in nature but do have the potential to generate additional income when commodity prices are favorable.

Navitas’ system serves numerous customers under long-term contracts. I should also note that these contracts involve acreage brimming with 10,000 identified future drilling locations. While we aren’t privy to its financial books (Navitas is privately owned), we can trust that Enterprise did its due diligence.

The price certainly seems right, considering the acquisition will be immediately accretive to distributable cash flow (DCF) – adding $0.20 per unit annually. (Remember, because MLPs are structured as partnerships, ownership is designates as “units” rather than shares.)

Management hinted that the incremental cash flows will bolster capital returns (i.e. dividends and stock buybacks) going forward. In the meantime, the board has already approved yet another hike, lifting the quarterly distribution to $0.465 per unit. This will mark the 23rd consecutive annual increase, pushing the yield to 7.8%. 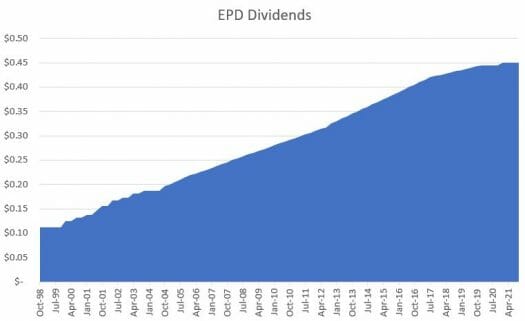 While many yields in the 8% range are shaky, EPD maintains a solid investment-grade balance sheet – not to mention a comfortable distribution coverage ratio of 160%. The $1.6 billion in DCF last quarter was enough to cover the dividend with $624 million left to spare. Over the past 12 months, the surplus has totaled $2.6 billion.

EPD remains an attractive portfolio anchor for income seekers and value investors. But it won’t be the last big player in the energy space looking for takeover targets…

I’ve been telling readers for the past few weeks that we could see a massive wave of takeovers in the energy sector. It’s all thanks to the booming Permian region in West Texas. And according to my research, I think I may have found the next target…

My research staff and I have found a small energy company that’s sitting on one of the biggest oil finds on record. It’s the perfect target for a bigger company looking to cash in and more production to the fold. So if you’re less concerned about income and looking for an opportunity with serious upside potential, then this is where you should look… Go here to learn more now.