With Rising Rates, It’s Time To Take A Look At Regional Bank Stocks…

Back in the summer of 1996, and I had a few months to relax before starting my senior year of college. I wasn’t really looking for work, but like most students, was a little short on funds. So when I saw a poster for a marketing intern position (this was long before internet job sites), I decided to turn in an application.

A few days later, I was the newest hire at Premier Bank, a Baton-Rouge-based lender with 150 branches scattered throughout Louisiana. The position had nothing to do with my chosen fields of finance and investment management. But it was an easy gig. My primary responsibility was to rotate from branch to branch instructing customers how to deposit checks using the ATM.

How things change. Today, you can make an electronic deposit from your mobile phone without ever leaving the house.

I came onboard during a time of transition. Premier Bank had been recently acquired by Bank One. So with new branding inside and new signage outside, much of my workday also consisted of informing customers of the switch and assuring them that their accounts were still in good hands. I’ve probably still got an old Bank One checkbook lying around the house somewhere. But there are few other remnants left from my first employer – which was once the nation’s sixth-largest bank. Like Premier, it’s now just a historical footnote.

You can probably guess what happened. I’ll give you a hint. Bank One Ballpark (home of the Arizona Diamondbacks Major League Baseball team) has since been renamed Chase Field. Not long after expanding its empire into Louisiana, Bank One itself became a target and was scooped up by JP Morgan Chase (NYSE: JPM) for $58 billion.

It was a smart match for several reasons, not the least of which was the opportunity to eliminate 10,000 overlapping positions (about 7% of the combined workforce), yielding over $2 billion in annual cost savings. The merger also had strategic benefits, joining JP Morgan Chase’s well-known investment banking prowess with Bank One’s massive retail consumer and credit card issuing platforms.

But the biggest motivation may simply have been to increase the bank’s size and scale to keep pace with larger rivals. This deal came on the footsteps of Bank of America’s $47 billion bid for FleetBoston, which created a giant with nearly $1 trillion in assets. By taking over Bank One, JP Morgan Chase leapfrogged into the number two position with $1.1 trillion.

The industry leader, Citigroup, ascended to the top by merger through the marriage of Citicorp and Travelers Group (a deal that broke down Glass-Steagall regulatory barriers and ushered in a new age of financial integration).

A New Round Of Bank Consolidation Is Already Happening…

When everyone around you has secured a dance partner, there is naturally a more desperate push to find one of your own and pair up. Such industry consolidation is common, but the banking clan has taken it to a whole new level. There has been more than $60 billion in M&A activity over the past year alone, more than double the volume from 2020.

It hasn’t been this busy since 2007. Among other deals, Citizens Financial (NYSE: CFG) recently extended a $3.5 billion bid for Investors Bancorp, and M&T Bank offered $7.6 billion for People’s United. 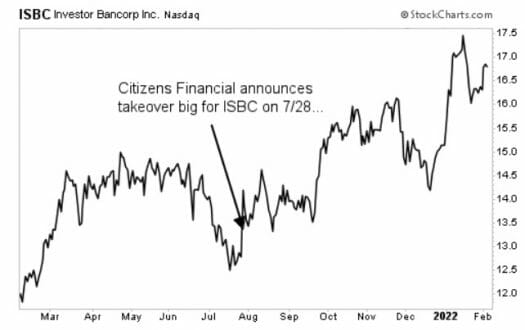 But there’s more going on here than just wheeling and dealing. As we’ve discussed, the financial sector is finally getting some long-overdue attention from the market. That’s partly because of attractive valuations, but also because this is one of the few industries that stand to benefit from the next rate tightening cycle.

With the Federal Reserve signaling multiple rate hikes on the horizon, we’ve already seen a sharp increase in lending rates. The average 30-year mortgage now runs about 3.78% nationwide, up from 2.73% a year ago. But banks are much less responsive and slower to increase the rates paid out to depositors. A standard one-year CD will get you just 0.14%, according to Bankrate.

We’ve already gotten a taste of this… While the broader market was tumbling, the KBW Bank Index popped 10.8% in the first seven trading days of 2022 – its strongest start to a year in over a decade.

I expect we’ll see more of this as the rate-tightening cycle plays out this year. And that makes the financial sector an attractive place to be for investors. What’s more, investors should take a look at regional banks in particular. A well-capitalized regional player is not only more likely to be overlooked by the crowd and offer more upside potential — but it wouldn’t be surprising to see a larger player (like Chase, Wells, or BofA) to come knocking on the door…

That’s why we recently added a regional bank to our portfolio over at my premium service, Takeover Trader. But as much as I like the financial sector, I think there’s even more potential for profits out in West Texas…

According to my research, we could be on the cusp of a massive wave of takeovers in the energy sector. It’s all thanks to the booming Permian region in West Texas — and I think I may have found the next target…

My research staff and I have found a small energy company that’s sitting on one of the most significant oil finds on record. That alone means investors could make some serious profits with this pick… But it also makes it the perfect target for a larger energy player — and that could lead to big-time gains, practically overnight. Go here to learn more now.