One Of My Biggest Winners Just Announced A Bold New Policy…

In an earlier article, I discussed an emerging trend that should make income investors take notice.

In short, it has to do with the way companies pay dividends — particularly in the resources and energy sectors.

It’s called a variable return of capital (VROC), and it works like it sounds. Rather than peg their dividend at a fixed rate and praying that the price of the commodity the company is reliant on producing doesn’t crater, more companies are moving to a payment based on operating results and cash flow.

As I explained earlier, dividend policies like this are common in Europe, but haven’t really caught on here in the U.S. until recently.

Sure, it’s nice to know exactly what kind of payment you’re going to get every 90 days. But sometimes the business cycle has other plans — especially the energy sector (or any other commodity for that matter).

Fortunately, one of our big winners over at High-Yield Investing recently implemented a policy that strikes a balance between the two approaches. The result: investors will enjoy a reliable, stable dividend while being rewarded in up cycles with an extra bonus.

The Best Of Both Worlds

The company that’s doing this is none other than ConocoPhillips (NYSE: COP).

It stands to reason that an energy producer selling nearly 2 million barrels of oil per day can afford to pay out richer dividends at $80 per barrel than it can at $40. And indeed, oil has made such a recovery over the past year. 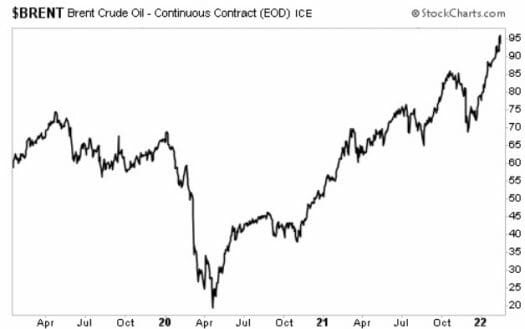 Like its peers, ConocoPhillips has prioritized its spending and pledged to return more surplus profit to stockholders. The question is how much more? As we know, hiking too aggressively (while great today) runs the risk of a future cutback the next time oil prices go into a protracted slump.

It’s not rocket science. But trying to maintain fixed dividends can be tough when commodity prices are constantly bouncing around. So COP has put the perfect solution into practice — adopting a three-tier return of capital program.

The first tier will be a sustainable base dividend distribution of $2.4 billion per year (quarterly payments of $0.46 per share). This amount can be comfortably met even when oil prices soften and shouldn’t need to be adjusted except in extreme circumstances.

Even during the first quarter of 2020 (the early stages of the Covid lockdowns when global oil prices sank into the $30s), COP still generated over $2 billion in operating cash flows, or $8 billion annually. So in most environments, it can afford to dish out considerably more than $2.4 billion.

That brings us to the second tier, the variable return of capital (VROC). The overriding goal is to return roughly 30% of operating cash flows. So if regular dividends and share buybacks combine for 20%, then variable dividends will make up the difference and comprise the remaining 10%. Give or take.

When the plan was first announced, the initial variable dividend was set at $1 billion, or $0.20 per share quarterly. Remember, this is in addition to the regular quarterly payment. But starting next quarter, we can expect even more. The VROC has just been raised to $0.30 per share, an increase of 50%. Between the three tiers (buybacks would be the third tier), COP plans to return $8 billion to stockholders in 2022, 30% more than it handed out last year.

Going forward, we can anticipate 8 dividends this year, four regular and four variable. By definition, the variable component will fluctuate along with cash flows – which continue to deepen.

Over the past 12 months, COP’s average realized sales price has doubled from $33 to $66 per barrel. Management shrewdly left production unhedged, allowing the company to reap the full benefits of this explosive rally. As a result, operating cash flows soared to $15.7 billion in fiscal 2021, dwarfing capital expenditures of $5.3 billion – leaving more than $10 billion in pure free cash flow. 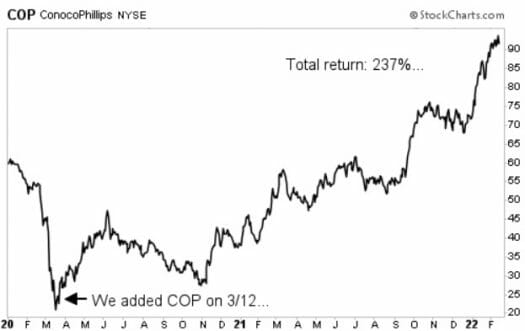 I’ve mentioned COP within these pages before. It’s been a holding in our High-Yield Investing portfolio since March 2020 — right around the time oil prices had cratered.

It was a classic case of zigging when everyone else was zagging. The timing couldn’t have been more perfect.

And as we moved into 2021, it proved to be a transformative year for COP. All told, we’ve been rewarded with a total return of 237%.

Hopefully, you were able to get in on COP. After all, in a runup like this, there were plenty of opportunities. And I expect even more in the year ahead, particularly considering the continued escalation of oil prices and the accretive acquisition of Concho Resources and its prime Permian Basin drilling targets.

In the meantime, I have a simple question for you… How would you like to get paid every month from your portfolio?

I make it my business to research the best income payers the market has to offer. And what I’ve found is that most investors don’t even know that there are dozens of high-yielding monthly dividend payers out there…

And in my latest report, I reveal 12 of my favorite monthly dividend payers that you should consider owning. You could start receiving payouts of $210… $236… $250… and more every single month!