3 Questions About Cryptos (Including: How High Could The Price Of Bitcoin Go?)

As you may be aware, I recently announced that my premium readers and I will be dipping our toes into the cryptocurrency waters. As I explained, while our fundamental mission will still be primarily focused on equities, we’d be doing ourselves a disservice if we didn’t expand our horizons a little bit.

I’ve received a lot of wonderful feedback, and I’m very grateful for all of the responses.

Today, I want to continue those discussions by addressing a few more questions I’ve received.

As I’ve mentioned before, my goal here is simple. Whether you decide to invest in cryptocurrencies or not, I’m hoping you’ll walk away with a better understanding of this new alternative asset class.

With that said, let’s get to it…

Question #1: Why is it called “crypto”-currency?

This is a great question, and I’m glad some of you aren’t afraid to ask. The easiest way to think about this is that cryptography is the secret sauce in cryptocurrencies. And this is why people are so excited about it…

Cryptography is the study of secure communications techniques that allow only the sender and intended recipient of a message to view its contents.

Think about when you log into your bank account online or enter your credit card information on your computer to make a purchase. This sensitive data is secure because of modern cryptography.

Web browsers and Internet protocols help us create digital secrets automatically when we send private information from our computers and smartphones. Similar cryptographic technology is used by the bitcoin network.

Hence the name cryptocurrency. There’s a lot more to say, of course, but this leads us into another question I’ve received…

Question #2: What Is The Blockchain?

Remember in my previous article, when I said that in our current system there are a lot of players at work behind the scenes to transfer our money in exchange for goods? All these players create weak spots in the transaction that can be exploited by fraudsters.

If you sell something on Craigslist or Facebook Marketplace, you’re probably only going to accept cash.

When it comes to bitcoin a common question is how do we know if the person opposite us has enough bitcoin in their wallet to pay for the good or service we are selling?

And the answer is the blockchain.

Let’s think about this in the context of bitcoin. If bitcoin is money, then its blockchain is the ledger that keeps track of who owns this money.

The blockchain is basically a database. It stores data about every single transaction. Everyone can see the block data. But since it only records bitcoin addresses (not names), it offers a degree of anonymity. And since the blockchain data is visible, bitcoin users can agree on its accuracy. That means we can trust the blockchain, instead of having to trust other bitcoin users.

What’s more, the blockchain doesn’t belong to any one database. It’s not centralized.

In a centralized database, there’s one copy on a computer or server that users can access. If the server fails, the entire network is shut down. Also, if the data on the server is compromised, then all the users will see faulty data.

A distributed database, on the other hand, has no single point of failure. Many copies of the database exist. And these copies can be used to verify each other’s accuracy.

Bitcoin operates on a distributed network. It’s estimated that more than 10,000 computers are running the Bitcoin protocol around the world. If some of these “nodes” fail, the bitcoin network continues to function. Also, thousands of copies of the blockchain exist, which helps ensure the integrity of the data.

This is a key part of why you often hear that blockchain technology will revolutionize our way of life. Remember, blockchain is really just a ledger… a special type of distributed ledger, but a ledger, nonetheless. And a big benefit of this distributed system is that verification comes from the consensus of many nodes. The network has agreed that the transactions in a block that is being added to the blockchain are all valid.

It would be hard to hijack this network. Consider that a malicious group would need to control more than 50% of the processing power of the bitcoin network to corrupt the blockchain. That’s an unlikely scenario, given the size of the network.

Question #3: How High Will The Price Of Bitcoin Climb?

Bitcoin’s price, like any other freely traded asset, is the market’s consensus of its worth. Its price is the equilibrium that balances supply and demand at that moment in time.

How high bitcoin’s price can go is anyone’s guess. But even the loftiest price targets out there are achievable.

Think about this… bitcoin — and other cryptocurrencies — are competing with global currencies like the U.S. dollar, and even gold and silver. Like anything in business, these forms of money are jockeying for their place in the world. Looking to steal market share from one another. For years gold was the standard, then we went off the gold standard and now the U.S. dollar is king. The euro and Chinese yuan are always nibbling at the heels of the U.S. dollar to knock it off its pedestal.

Now, bitcoin has elbowed its way into the room and is looking to steal share from gold and traditional currencies. 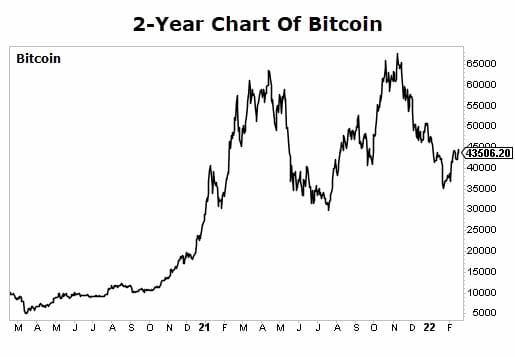 It is estimated that the total value of all the gold that has been mined (so far) is around $8 trillion. The amount of broad money globally according to the Central Intelligence Agency’s World Factbook sits at about $80 trillion. (“Broad money” includes coins, bills, time deposits, money-market, savings, and checking accounts.)

These market values of gold and cash can provide some benchmarks for hypothetical prices of bitcoin.

At $500,000 per bitcoin, its total market value would be nearly $10 trillion, which would exceed the value of gold, but it would only be about 13% of global broad money.

That’s really not that far-fetched of a price target over the long run if bitcoin becomes a global money standard and takes sizeable share from fiat currencies.

P.S. I just released another BIG prediction about cryptocurrencies in my list of investment predictions for 2022…

In short, my team and I think cryptocurrencies will surge again in 2022. But here’s the thing… the big winner won’t be Bitcoin, Binance, or Ethereum. While those cryptocurrencies could do well, we think there’s another one with a lot more upside potential for new investors. It’s 321 times faster than its prime competitor and could surpass it in value…