Prices For This Commodity Are Soaring — And Our Prediction Pays Off…

Early on Monday morning, I decided to make the trip to Costco to fill up on gas. Since the lines are usually long on the weekend, I typically like to go on an “off-hour” to avoid the crowds.

It wasn’t to be. There was a mad dash. I’ve never seen so many people shaking their heads (and probably cursing) at a gas station.

As the Russian invasion of Ukraine continues, the primary focus of concern is of course the human toll. But as each day brings new developments in terms of sanctions, we’ve all watched as oil prices soar. And now, Americans are feeling their impact on prices at the pump.

But today, I want to take a brief detour and consider the impact of these sanctions on another commodity…

If you’re a regular reader, then you probably know by now that my colleague Jimmy Butts and his research team release a report of investment predictions each year. It’s one of the most controversial, popular, and profitable things we do all year…

When we rolled out this year’s list of investment predictions for 2022, we included a prediction about wheat prices. In short, we predicted that they would soar.

And soar they have… Wheat futures reached record highs on Tuesday, before retreating in Wednesday’s trading. This follows a 14-year high that was set on Friday, and a 41% overall jump from previous week — the biggest gain over six decades. 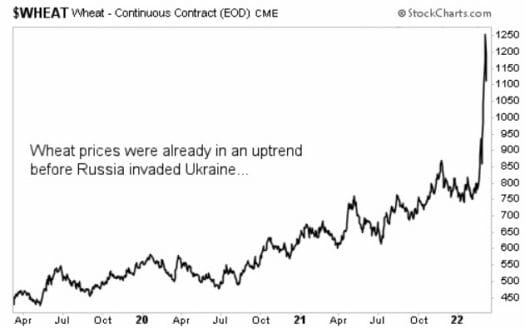 To be clear, we had no idea that Russia would invade Ukraine. We’re good, but we’re not that good.

Instead, our prediction had to do with disappointing crop yields in the previous year. In fact, we predicted that the ongoing “megadrought” throughout much of the U.S. would continue, causing some farmers to simply throw in the towel.

[You can read more about our other “megadrought” prediction here.]

While changing weather patterns and low crop yields might not make the nightly news, I’m sure you’ve noticed how this has played out. Combine this with bungled supply chains and strong demand from consumers, and you have a perfect recipe for higher prices at the grocery store.

Now, what does Russia’s invasion of Ukraine have to do with all of this? Glad you asked. You see, Russia is the world’s biggest exporter of wheat. Ukraine ranks as the fifth-biggest. Together, they make up for 29% of global wheat exports. 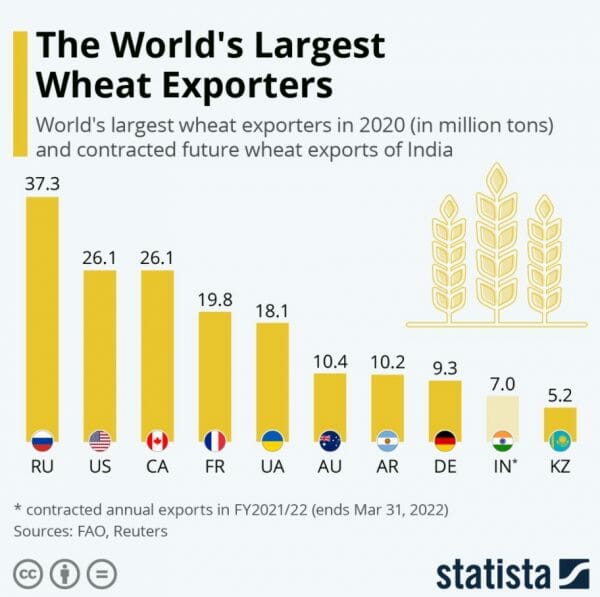 That has sent shockwaves through the markets. Trading in wheat futures have experienced multiple “limit-up” days, where prices were bid up so high that trading had to be halted.

If wheat prices remain elevated (or go even higher), we’re going to have a serious problem on our hands. For example, Egypt, with a population of 102 million, consumes about 21 million tons of what a year. And in an ironic twist of fate, the former breadbasket of the Roman Empire imports 80% of its supply from Russia and Ukraine.

This is just one case — and there are plenty others. The point is, while higher prices for a loaf of bread might be an annoyance for us here in the U.S., it’s not an exaggeration to say that it could be a life or death matter in some countries around the world.

Now, you might say we were “half right” with our prediction about wheat prices. That’s okay because all we really need to get right is how to profit. And that’s exactly what happened…

Since this one has already shot up so much, I’m going to reveal the name of the pick. The Teucrium Wheat Fund (NYSE: WHEAT) is an exchange-traded fund (ETF) that tracks the price movements of wheat. And since the beginning of the year, it’s shot up over 40%. 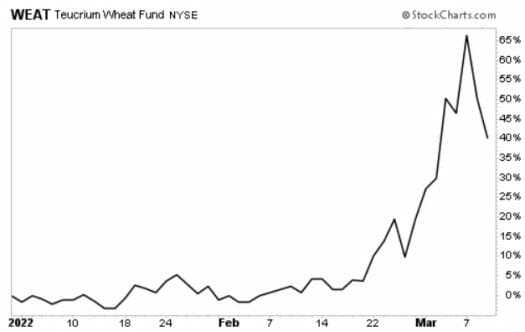 If wheat prices continue soaring, then this ETF should continue marching higher. But since markets are forward-looking, there may not be as much upside left in this one as there was before. Only time will tell. Rumors of diplomatic negotiations between Russia and Ukraine have already sent prices retreating from all-time highs in the past couple of days.

Also, keep an eye on the prices of other commodities that will be impacted by the ongoing conflict, including nickel, fertilizer, beef, and others. Stay tuned.

In the meantime, we’re only two months into the year, and our predictions are already paying off big. And while we can’t guarantee that every single prediction will play out how we expect and make investors a killing, our track record is pretty good…

When we began doing this, people told us we were crazy. But we felt that investors want clear, unhedged, and accurate forecasts… and we were determined to provide them for all to see.

If you want to learn more about the market’s most pressing dangers and profitable opportunities, go here now.