One Big (Positive) Change From Covid That We Can Profit From…

Do you remember where you were on March 10, 2020? I was sitting at my favorite sports pub enjoying a cold beverage and watching college basketball. Then, some deeply unsettling news scrolled across the bottom of the screen.

Ivy League officials had just canceled their post-season tournament due to Coronavirus concerns.

Now, I don’t think anybody seriously expected Harvard or Yale to be a “Final Four” contender in the upcoming NCAA tourney. Still, this was a pretty big deal. An entire league had scrapped the remainder of the season, drawing outrage from players and fans. That just doesn’t happen.

We had all been hearing about the spread of the mysterious disease, especially overseas. But for sports fans, this was the first tangible sign that something dark and sinister was at our doorstep. I remember hoping that this was just an isolated incident. A few overly-cautious administrators overreacting. Instead, the Ivy League proved to be the canary in the coal mine. The Atlantic Coast Conference (ACC) suspended play the following day. The Big 12 fell next.

And then everything went to hell.

For the first time in 82 years, March Madness itself was canceled. The annual 64-team tournament survived World War II — but not Covid. Baseball, football, and hockey weren’t far behind, from Little League all the way to the top. Of course, the tragic losses that followed reminded us all that sports are just games. Over the new few months, virtually everything shut down… weddings, family vacations, high school graduations.

We just passed the two-year anniversary of that tumultuous period. So it was with a renewed sense of appreciation that I filled out this year’s March Madness tournament bracket. Thankfully, we are returning to normal.

But Covid left some lasting trends behind in its wake – one of which could be a slam-dunk for investors.

The Great Outdoors Make A Comeback

Remember the mandatory lockdowns when trips out of the home were limited to groceries and other essentials? When mask mandates and social distancing restrictions were in full effect? When entertainment was limited to whatever could be streamed over the internet?

Of course, you do. That’s not something easily forgotten. The pandemic left an indelible mark on most of us. More importantly, it also triggered widespread changes in attitudes that could influence consumer behavior (and spending patterns) for years to come.

For starters, there has been a pronounced exodus out of crowded urban cities and into rural areas. While that migration has slowed, a recent poll found that 50% of all U.S. adults said they would prefer living in a small town to a sprawling metropolis, up from 39% before Covid.

After being cooped up in high-rise condos and apartment buildings, you can understand why many are now yearning for greener pastures. Most of the towns with the sharpest population growth are located in desirable mountain or coastal regions, including Asheville, North Carolina and Myrtle Beach, South Carolina. And we’ve already talked out the soaring housing markets that have accompanied this shift.

Of course, not everyone wants to relocate. But this is just part of a larger trend. Whether it’s a full-time move or just a weekend retreat, the pandemic has reacquainted millions of people with their love of the outdoors.

Maybe that’s why the board recently hiked the company’s quarterly dividends by 50%. 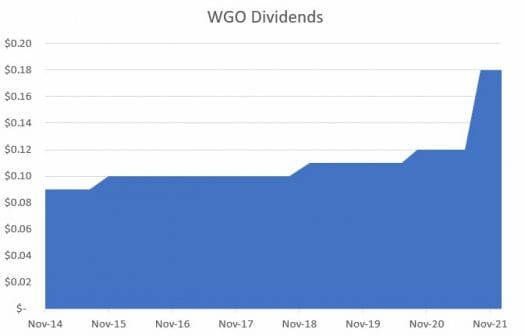 Even more impressive, Outdoorsy (a person-to-person RV rental company) reported a 4,000% surge in bookings during the pandemic and now has 48 million users worldwide. Nearly nine in ten of those customers are first-time RV users, indicating a widening market.

There’s nothing like fresh air to cure a severe case of cabin fever.

Yet, while there’s something to be said for a Griswold-style, cross-country family road trip, millions of people are finding ways to relax a little closer to home. Some in their own backyard. Swimming pool installations have been running at a record pace, leading to shortages of pumps, heaters, and other such equipment.

One regional CEO in Indiana characterized demand thusly, “I’ve been in this industry for 35 years and I’ve never seen anything like this.”

Pool Corp (Nasdaq: POOL), the world’s largest wholesaler of swimming pool products and services (and one of my former holdings) has tripled from $150 to $450 per share over the past three years. Demand for outdoor recreation has “catapulted” annual sales to record highs of $5 billion. After reporting an impressive 78% increase in 2021 profits, the company just raised its 2022 earnings outlook. 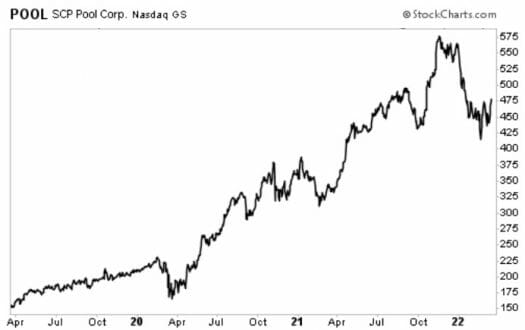 The only problem? Builders can’t install new pools fast enough, leading to frustrating wait times of a year or more in some markets.

We haven’t even talked about the 25 million people who hit the links and played a round or two of golf last year, the biggest increase in 17 years. Or the increased popularity of all-terrain vehicles and other motorized toys. Add it all up, and the outdoor recreation economy is estimated at $689 billion annually.

For perspective, that’s greater than the GDP of Switzerland. RVs and swimming pools account for a sizeable chunk of that total. But I’ve saved the best for last…

These exact same tailwinds have propelled boating to new heights. If you’ve read my bio, then you know that I prefer to spend my leisure time on the water fishing, tubing, or just cruising around. Apparently, I’m not alone. Domestic powerboat sales have topped 300,000 units in back-to-back years for the first time ever and are forecast to rise even higher in 2022.

In dollar terms, boat makers haul in nearly $50 billion in annual revenues, making this the single largest segment of the outdoor economy. And that was before this fundamental behavioral shift to get off the couch and spend more time in the great outdoors.

All told, there are about five publicly-traded companies involved in the industry. So if you’re interested in this idea, there are ample opportunities for research. But over at High-Yield Investing, I recently discussed one company that’s making the most of this boom – converting rising demand into a growing stream of dividend income.

To learn how to get the name of this pick and access my latest research, go here now.