The S&P 500 Index kicked off the year in sell-off mode, and at one point was down by more than 12%. The tech-heavy Nasdaq officially hit bear market territory on March 14, defined as a pullback of at least 20%.

While tech stocks fueled much of the selloff heading into the year, the conflict in Ukraine has only plunged the world into more uncertainty…

Volatility was rising for much of the first couple of months. The best measure of the stock market’s volatility is the CBOE Volatility Index (“VIX”). It’s often referred to as the market’s “fear gauge.” The VIX spiked to 36 earlier this month, its highest level in more than a year. 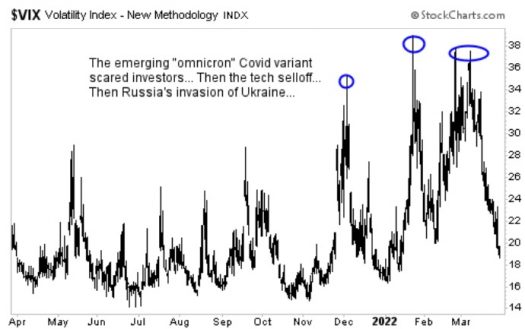 Oil and gas prices were soaring. The price of oil surpassed $100 per barrel for the first time since 2014. Higher oil prices likely mean that inflation will remain at levels we haven’t seen since the early 1980s.

This confluence of events (Covid-19, supply chain issues, Russia’s war on Ukraine, high oil prices, rising inflation) has caused stocks to hit every pothole in the road. It’s been a bumpy ride and even bumpier for stocks outside of the United States.

But we’re already beginning to see signs that things are getting back to normal (whatever “normal” is these days).

The major indices have been rallying for the past few days, making up for lost ground. The S&P 500, for example, is now only down 3% on the year. Promising signs of ceasefire talks are emerging from Ukraine, too.

My point is that investors shouldn’t fret too much when things get dicey in the market. Things are usually not as bad as they seem. And if they are, they will eventually get back to “normal” – which can spell opportunity for investors.

The same thing goes for individual stocks, too – especially when you’re talking about large companies that dominate their market and make buckets of cash…

What Can Happen When Pessimism Means Opportunity

For example, I remember that it wasn’t that long ago (end of 2015 and into 2016) that shares of Apple (Nasdaq: AAPL) were trading at a ridiculously low valuation.

At this time, Apple was Wall Street’s favorite whipping boy. All everybody talked about was that its best days were behind it. And sure, compared to what the company had done in terms of sales growth it seemed like these naysayers were correct. After all, the company grew at breakneck speeds in 2010, 2011, and 2012. Annual revenue growth was 79.3%, 66.9%, and 43.6%, respectively.

But investors didn’t buy it… 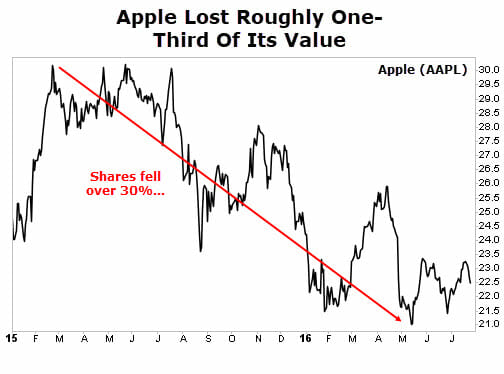 According to most talking heads in the financial media, this was the end of Apple. Not that the company would go bankrupt or anything, but the sentiment surrounding the company was very negative.

Sales of the iPhone were dying off. Nobody would be buying iPads. Computer sales were slowing. And the company’s newest product — Apple Watch — wouldn’t become a hit with consumers. After all, who was going to fork over hundreds of dollars for a watch?

At least these were the common talking points of why shares of Apple were slipping. These were reasons why the company should no longer be considered a top-tier investment.

During this time, I vividly recall chatting with my colleague Brad Briggs about Apple. We marveled at the fact that this wonderful business that produced enormous amounts of cash flow was trading for less than 10-times free cash flow.

On a price-to-earnings basis, investors were only paying 11.5x for each dollar of earnings. Stupendously cheap. For reference, today, shares exchange hands for more than 25 times earnings… even after the stock’s recent pullback. 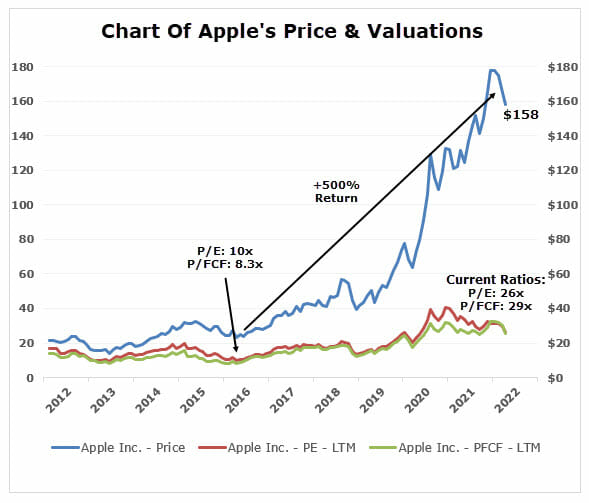 We published our thoughts on Apple in StreetAuthority Insider — a publication that goes out to all subscribers. We called it a “no-brainer” investment.

Hopefully, many of our readers pulled the trigger on the investment. I know Brad was savvy enough to put some money to work in Apple, and it’s paid off handsomely since then… 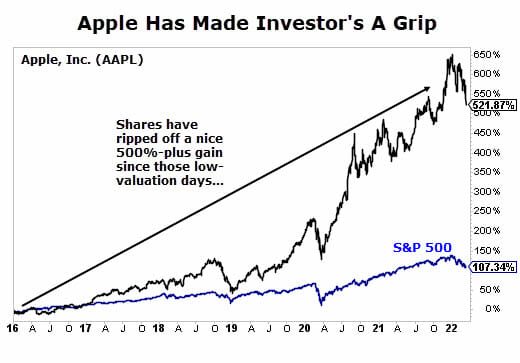 Had you ignored the media headlines about Apple’s future and invested in the stock you would have done extremely well. As you can see, shares of Apple soared more than 600% before the recent selloff in the broader market. Even after the selloff, shares are still crushing the S&P 500.

While I think Apple is still a great company, that’s not the point here…

In fact, in a future piece, I’m going to tell you about another situation I’m seeing right now that’s strikingly similar to what happened with Apple. It’s another world-dominator that just happens to be Wall Street’s favorite whipping boy right now. And if I’m right, investors could make a killing from one of the most well-known stocks on the market.

The point is that while we don’t necessarily know what the future will hold, I do know that it’s rarely a good time to dump everything. And that’s especially true when you’re talking about solid, world-dominating companies, which should make up the core of your portfolio. In fact, when uncertainty takes hold, the best course of action is to either do nothing or perhaps even buy.

In the meantime, if you’re looking to take advantage of record-high oil prices and profit, then you need to see this…

My colleague Nathan Slaughter has been telling his readers about a small oil company that’s sitting on one of the biggest oil finds on record out in West Texas. He says it could lead to the “the mother of all oil booms” – and so far, his prediction is proving correct…

In his latest report, Nathan will pull back the curtain on this massive boom, tell you why we’re about to see a massive wave of deals here, and tell you about the one small company that’s right in the heart of all the action. By getting in now before the rest of the crowd, you could pocket triple-digit gains, potentially overnight.