The Easiest Way To Beat Inflation And Earn 7% (Or More)…

As you probably know already, consumer prices climbed 8.5%. This was actually slightly lower than many had anticipated. Regardless, inflation is now at its highest level in 40 years.

The big question is how much higher can inflation go? Of course, nobody knows if inflation has peaked or if it will continue its march higher.

Central banks raise interest rates as their main tool to fight increasing costs. The next Fed meeting is next month, so expect to see a lot of headlines about whether the Fed will hike rates by 25 basis points or 50 basis points. Most are betting on the latter.

In the meantime, folks looking to purchase a home are already seeing the impacts of higher interest rates. Mortgage rates reached 5% for the first time in over a decade.

This earnings season will be interesting, as we’ll get a glimpse into how corporate America is impacted by rising interest rates, the war in Ukraine, inflation, the supply chain, and other issues that are affecting their business.

And although it’s been shuffled to the back of the pack, we can’t forget about Covid-19… especially in China. It seems the country can’t shake a new Omicron variant, and Shanghai — the country’s biggest city and an important financial hub — has been locked down with Covid-19 restrictions…

Over at Capital Wealth Letter, my premium advisory, we continue to keep an eye on these matters. But, of course, the elephant in the room is inflation. And that’s why I want to pass along something I recently told my premium readers about – a way to fight inflation with one of the safest investments around…

If You Want To Protect Your Cash, Listen Up…

Last summer I talked about the hidden destructive effects of inflation. At the time economists at the Federal Reserve assured us that the inflation we were seeing back then was only “transitory.” Stemming from the pandemic. Not going to last for long.

I didn’t believe it then, and today, we know that inflation isn’t the vagabond that the Fed wanted us to believe.

On top of surging inflation, we have geopolitical tensions, the market’s seemingly constant volatility, talk of a looming recession, and rising rates. Add it all up and it’s easy to see why people are concerned about their money — and what to do with it.

Fortunately, there’s a “risk-free” way to earn more than 7% over the next year…

I touched on it in that June issue last summer. But I want to bring it back up because it crushes the pitiful amount that you’re earning in your savings account… certificate of deposit (CD)… or any other short-term Treasury.

In fact, these special U.S. savings bonds pay roughly between 89 and 118 times more income than the average savings and money market accounts. So, if you’re looking for a place to park some cash that doesn’t deteriorate with inflation, then these bonds are a perfect investment to add to your portfolio.

I know bonds aren’t the most exciting thing in the world, but hear me out… this could be the easiest 7%-plus you could earn on your money.

I’m talking about Series I Savings Bonds, or I Bonds.

How I Bonds Work

First, you can NOT buy these savings bonds through your brokerage account. You must purchase them from the government directly. It’s a relatively simple process that can be done through TreasuryDirect.gov.

I Bonds were launched by the Treasury in 1998. Like other Treasury bonds, the U.S. government directly issues and backs these investments.

The interest rate on I bonds is a combination of a fixed rate and an inflation rate. The fixed rate has pretty much remained at zero for the last decade.

The inflation rate is pegged to inflation and is calculated using the Consumer Price Index for All Urban Consumers (CPI-U). Right now, that rate is 3.54% or 7.12% annualized. That’s the highest it has been in roughly a decade. That’s good through April 30th.

The Treasury announces the new rate for I Bonds on May 1 and November 1 every year. And while the Treasury hasn’t officially announced the rate for the next six months, based on the raw inflation numbers used to determine rates, it’s almost certain that we will see another six months of yields above 7%.

The table below shows when your new rate will go into effect based on when you purchase your I bond: 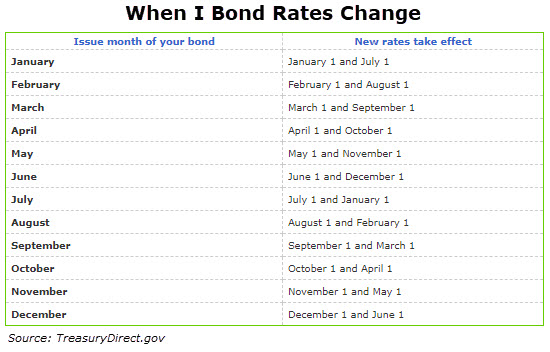 As you can see from the table above, if you purchase your bond in April, your next rate change will take effect in October and it will be based off of May’s rate change. In short, if you buy before the end of April, you stand to earn more than 7% for your entire first year of ownership. But it’s imperative that you purchase the I Bonds by April 30.

Another perk about I-Bonds is that interest compounds semiannually — earning holders more interest on the interest they’ve already collected.

Also, the interest you earn from I Bonds is exempt from state or local income tax (the Feds still want their cut, however). Although using the money for higher education may keep you from paying federal income tax on your savings bond interest.

You can purchase up to $10,000 of electronic I-Bonds per social security number every calendar year. $25 is the minimum. Again, you can only purchase these through TreasuryDirect.gov.

The only real drawback of I Bonds is that you can’t cash them in for the first year of ownership. So, don’t use the money that you’ll need in the next 12 months.

Also, if you redeem your I Bonds before five years you’ll forfeit the latest three months of interest. But even if you decided to cash them in a year from now and forfeit that interest, you’d still earn more in interest than what you would in a savings account or money market account.

But these I Bonds will keep earning interest for 30 years and they are as close to a “free lunch” as you’ll ever get in the investing world.

It’s worth noting that there may a bit of urgency here. The truth is, we don’t know for sure if inflation will be this high later this year (I’m betting it will still be hot though). Since these bonds reset every six months, you may want to settle for the April rate (which is already high).

So, if you have some extra cash eroding in a low-interest savings account, then consider moving some or all of it (up to $10,000) into an I Bond. I will add I Bonds to the portfolio to help us keep tabs on them.

Editor’s Note: If you’ve already taken moves protect some of your cash, another way to beat inflation is to simply grow your way out of it. And that’s where my latest research report comes in…

Reports indicate that Elon Musk’s secretive Starlink satellite internet service is already creating a MASSIVE buzz — and could come out of beta as soon as next month. And even though Starlink is “off limits” to regular investors… we’ve uncovered a “Silent Partner” that gets you in on the ground floor… lightyears ahead of other investors.