It’s controversial. And it has created — and destroyed — more wealth than anything else on the planet.

It’s helped win wars (while also being a key factor in other wars). It spurred the Industrial Revolution. It propelled America into an economic powerhouse and is responsible for most of the common amenities in our lives today… electricity, vehicles, warmth, clothing, food, the list is nearly endless.

The boom-and-bust history of oil is just as compelling. Before they figured out how to drill for oil, folks in Western Pennsylvania used towels to sop up oil out of creeks. Then, they squeezed it into barrels and sold this potent fuel as medicine.

The first person to drill for oil was Edwin Laurentine Drake, also known as the “colonel” — although he’d been awarded no such a rank, much less never served in the U.S. Army. But he weaseled his way into becoming a part of the Seneca Oil team in the 1850s.

Seneca Oil was the first company that actively searched and drilled for oil. Of course, at the time this seemed ridiculous. The team was mocked at every turn. And while Drake had no background in operating drilling rigs (he was a train conductor at one point), he proved to be innovative… and relentless.

More than a year after Drake began work for Seneca Oil in Pennsylvania most investors had written off the project. There had been no progress, and people continued to laugh.

But Drake persisted. He continued to drill, and he finally figured out that if he drove a steel pipe into the ground it would prevent his well from collapsing. He then could send a drill through the pipe and begin drilling.

It’s hard to overstate the significance of Seneca Oil’s discovery and the unprecedented boom that immediately followed. For America, the abundance of oil paved the way for huge advances in the Industrial Revolution by lubricating machinery, providing safe light for around-the-clock manufacturing, and supplying gasoline to the fledgling automotive industry.

But the change in oil price that followed Drake’s oil discovery is a case study in the law of supply and demand. In January 1861, a barrel of oil cost $10. By December of that same year, the price had dropped to $0.10 a barrel.

However, consumer demand eventually caught up. Lamp sales exploded, as the country realized that will-lit homes were now a possibility for families of all income levels. American industrialists found innovative uses for oil’s superior lubrication qualities.

By the end of the Civil War, the “boom” was back on and the price of oil climbed to nearly $14 per barrel. And so it went on… booms followed by busts for the next several years.

History Repeats – And We Can Profit

I bring this all up to say that, to this day, little has changed in this respect.

With the price of West Texas Intermediate Crude at around $102 per barrel, it’s hard not to be bullish on these stocks right now. 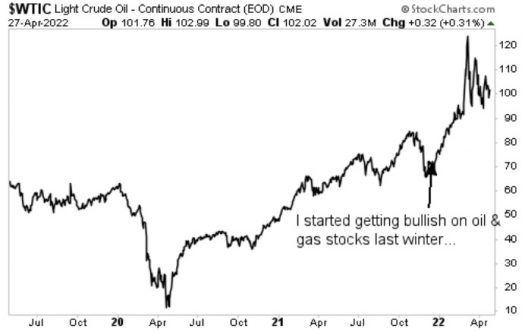 I think one of the best ways to trade the momentum in the sector right now is with Pioneer Natural Resources (NYSE: PXD). This company operates heavily in the Permian Basin — the dusty patch of land in Texas and New Mexico that boasts some enviable oil reserves.

The untapped potential is almost incalculable. The US Geological Society took a stab at it and found that there are still 46 billion barrels of recoverable oil reserves and 281 trillion cubic feet of natural gas underground below the Texas/New Mexico border.

Pioneer was an early mover in the Permian Basin, securing its vast territory for just $500 per acre. For context, recent asset sales have closed in the neighborhood of $38,000 per acre – with some appraisals even richer.

There are multiple stacked plays (one on top of the other at different depths) in the Permian Basin – and they aren’t all created equal. Much of Pioneer’s acreage is in the sweet spot of the Midland Basin. This is shallower than the nearby Delaware Basin, meaning lower drilling costs. And it holds higher-grade crude that typically commands a premium price.

I’ve mentioned time and again my mixed feelings about the oil & gas sector. I’ve made some incredible gains over the years – but also some of the biggest losses.

That said, PXD has been on a tear and is showing no signs of slowing down. If you’re looking to profit from the current momentum in the sector, it should be near the top of your list.

But keep an eye on oil prices and interest rates. Pioneer does have a solid balance sheet with $7.8 billion in total debt and $4.1 billion in cash on hand, but higher borrowing costs could crimp growth.

P.S. My colleague Nathan Slaughter may have found a pick with even more upside than PXD…