It wasn’t autographed, nor was it a rookie card. Yet, someone was willing to cough up a couple mil for a 2.5-inch by 3.5-inch rectangular piece of cardstock.

As a kid, I collected and traded baseball and other sports cards with friends. But not in my wildest dreams would I have thought that someone would pay millions of dollars for a piece of paper with someone’s face printed on it.

Sports cards and memorabilia are big business. There was even a publicly-traded company dedicated to the space in Collectors Universe (CLCT), which was acquired by an investor group last year for $700 million. 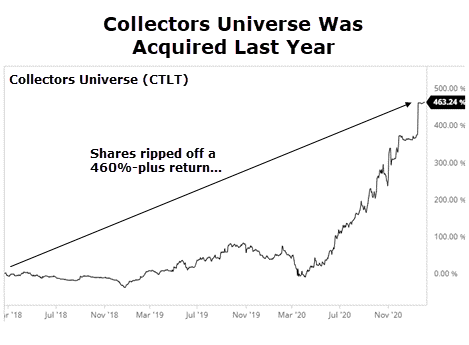 A small investment in Collectors Universe just a few years back would have been highly lucrative, delivering a swift 460% return.

What Makes Something Valuable, Anyway?

But going back to sports cards and even art, it’s hard for me (personally) to grasp why someone would pay so much for a small trading card or a painting.

I mean, I look at the famous 18-century painting of Venice by Italian painter Francesco Guardi. It’s a very nice painting of the popular Rialto Bridge in Venice, which I’ve been to. But if you told me that it sold for $43 million at an auction in 2011, I may not believe you.

Perhaps it’s because I grew up in a very small, poor town where $43 million is more than every person in my hometown makes in a year… combined. This makes it very hard for me to understand why someone would pay that much for a painting.

And the crazy thing is, $43 million barely puts that piece in the top 10 of paintings sold. That honor would go to Leonardo da Vinci’s Salvator Mundi, which raked in more than $450 million at an auction in 2016.

Now, if I were to explain my lack of understanding and appreciation for famous artwork to someone who does, they might try to explain that these one-of-a-kind pieces of artwork are priceless because the artist is no longer alive, making it an exclusive piece, etc.

Meanwhile, I would likely stubbornly retort that these pieces of art don’t produce cash flow, making it extremely hard to value. The value is arbitrary. It is only derived from what someone else is willing to pay.

The art aficionado — and perhaps even some of you reading this — would likely roll your eyes at my lack of fully grasping why pieces of art fetch so much money.

But here’s the thing… I don’t have to fully grasp or understand why somebody would pay so much for a painting or a baseball card.

What I do understand is that people have — and will continue to — place a price tag on such items. I understand the asset flow behind these transactions.

They clearly have value because, over time, many people have been willing to pay ever-increasing prices for these artistic masterpieces.

In other words, if a large number of people believe something has value — and are willing to pay cold, hard cash for it — then it has value. Regardless of whether it produces cash flow.

The Latest Thing… And What It Means For Investors

Before last year, Mike Winkelmann — an artist that goes by the name of Beeple — had never sold any of his artwork for more than $100.

Then last year, an NFT of his work sold for $69 million.

NFTs, or non-fungible tokens, are unique files that live on a blockchain. Buyers typically get limited rights to display the digital artwork.

I introduced my premium Capital Wealth Letter readers to this crazy world of NFTs in April 2021. In that issue, I mentioned a piece of digital art from the same artist — Beeble — had sold for $6.6 million.

The NFT craze really caught me by surprise. I mean at least with a baseball card or a painting you have a physical item. But NFT art seemed ridiculous. You essentially just get a digital file…

But get this… when I first told you about this crazy crypto art market last April, sales had surpassed $520 million. Less than a year later, sales have surpassed $2.1 trillion.

Don’t worry, I’m not recommending that we go out a purchase some crypto art. But that 2.1 trillion-dollar figure tells me that there’s value in the crypto art world.

Here’s the kicker about all these NFTs and crypto art… most of these digital art pieces are built and managed on a blockchain (most frequently Ethereum). Remember, the blockchain is a ledger that keeps track of who owns what.

For the most part, you can only purchase NFTs or crypto art with Ethereum cryptocurrency, or “Ether.” Even the NFT that sold for $69 million at famous auction house Christie’s had to be purchased with ether.

Now, I don’t know if NFTs are just a craze. But it is clear that the technology empowering this craze — the blockchain and more specifically the Ethereum network — has reached critical mass in which enough people believe in it that its value is more likely to go up than down.

Longtime readers will recall that we made a big call on Ether in one of our annual prediction reports. You can see what happened next in the chart below… 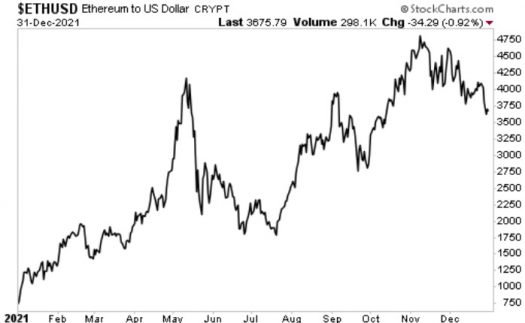 Readers who followed our recommendation back then had the chance to ride the nearly 400% surge that followed in 2021.

I’ll have much more to say on the world of cryptocurrency in the weeks to come. In the meantime, if you’re looking for our latest crypto prediction, then you need to check out our list of investment predictions for 2022…

My team and I predict cryptocurrencies will surge again in 2022… but the big winner won’t be Bitcoin, Binance, or Ethereum. We think another crypto is now a better bet for new investors. It is 321 times faster than its prime competitor and we think it could surpass it in value…

Learn more about this new crypto and the rest of my investment predictions for 2022 now.