Fasten Your Seatbelts: How To Play Defense And Prepare For More Turbulence

If you find yourself more than a little unnerved by the recent market activity, you’re not alone.

Last week was a rollercoaster, to say the least. Early on, traders digested comments from Fed Chair Jerome Powell that seemed to take a 75 basis-point hike off the table. And on Wednesday, as the Fed announced a 50 basis-point hike (the first hike of more than a quarter-percent in 20 years), the market cheered.

But as the week wore on, it became clear that investors were questioning the Fed’s ability to “stick the landing”. On Thursday, the S&P 500 plunged by 3.56%, while the Dow Jones Industrial Average lost 3.12%, and the tech-heavy Nasdaq puked up nearly 5% for its worst day in nearly two years.

In one camp, you have those who think the Fed isn’t being aggressive enough. With inflation at 40-year highs, they argue that higher rate hikes are necessary in order to avoid runaway inflation.

In the other camp, you have those who argue that a heavy-handed approach will plunge the economy into a recession.

In effect, both sides have their merits. In fact, Jerome Powel may be the only person (outside of a few toadies in the media) who thinks the central bank can stick a soft landing. And even he’s not all that sure…

In his Wednesday press conference, Powell said, “I would say I think we have a good chance to have a soft or softish landing or outcome, if you will.”

All of which is to say, fasten your seatbelts, it’s going to be a bumpy ride.

But fear not, corrections (and yes, even bear markets) are healthy and normal. It’s how new bull markets are born. Those of us who have been waiting for more realistic stock valuations, in particular, should rejoice.

In the meantime, to get some insights, I’m turning to my colleague Jimmy Butts, Chief Investment Strategist of Capital Wealth Letter.

Regular readers know that Jimmy correctly predicted more “pain” in the market when things started looking shaky last winter. And he’s been spot-on in his analysis ever since then. Below, I get his thoughts on where the markets stand, what we can expect, and how we should position ourselves moving forward…

Jimmy, back in January you said that the “pain” in stocks would get worse, and you were right. What do you make of what happened, and does your prediction still stand?

First off, let me just say that I’m usually a pretty optimistic guy.

And this year kicked off with a lot of optimism for the economy, markets, and quite frankly, the world. After two years dominated by Covid-19, the world was ready to get back to “normal.” Perhaps even desperate, regardless of what that new “normal” was…

As far as the markets go, the top analysts at all the major investment banks gave their predictions for the S&P 500, and the average estimate was for a 10% return.

I just didn’t see things that way. I laid exactly what I saw wrong with the markets in my first issue of Capital Wealth Letter in 2022. I warned that it could be a tough year for investors and that we could be in for a “rude awakening.”

So far, I’ve been right… and unfortunately, I don’t see things getting better soon.

Right now, the global economy is sliding, inflation is soaring, the bond market is off to its worst start on record and the stock bear market is taking its victims. The S&P 500 is down 13% year-to-date — the third-worst start on record — exceeded only by 1932 and 1939. And the Nasdaq was down 13.3% in April alone (the biggest monthly decline since October 2008) – and is down 21% on the year. 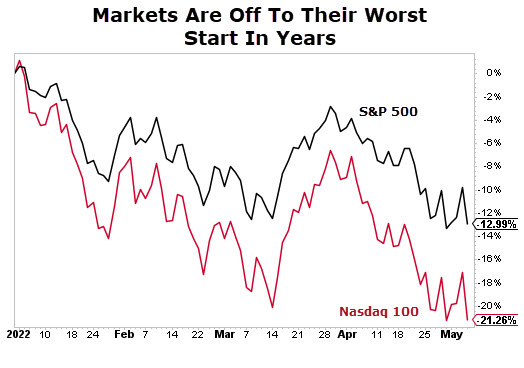 So I take it you’re not advocating “buying the dip” here?

I wouldn’t advise it. The S&P 500 is off to its worst start since 1939. We’ve witnessed stomach-churning volatility.

The market has corrected twice (defined as a pullback of over 10%, but less than 20%). In between, we’ve seen quick double-digit rallies suckering many investors back into the market.

These sorts of rallies are classic during a bear market — aptly named “bear market rally.” Although, you won’t find many folks in the financial media noting that we’re in a bear market.

But just know that during the 2000-2002 bust, there were 15 bear market rallies of between 10% and 50%. Ironically, prior to 2000, investors had been constantly rewarded for “buying the dips” in what was then a long bull market. We’ve seen that same buy-the-dip mentality over the last few years… It didn’t end well for investors then, and I don’t think it will end well for investors this time around, either.

Can you give us some of the highlights of why you’re still concerned?

Nearly everything that I talked about in January is still relevant today. We’re just getting a much clearer picture.

The Federal Reserve just hiked rates by 50 basis points for the first time in 20 years. And it will likely continue increasing interest rates to combat the highest inflation we’ve seen in 40 years. At the same time, the Fed is expected to (finally) start shrinking its balance sheet, eventually at a pace of $95 billion a month. That’s a huge double-tightening.

I recently read that even William Dudley, a New York Fed President for nearly a decade (until 2018), declared the chances are “almost zero” that the Fed doesn’t push the economy into a recession. History would back his argument.

Here’s another “fun fact”… on the seven occasions over the past 50 years when oil has risen 50%, it’s led to a recession 100% of the time. Not sure if you’ve noticed, but oil trades for more than $100 per barrel, a nearly 60% increase over the roughly $60 per barrel it traded for at this time last year.

The recent GDP report would back up your assertion. We learned that GDP decreased by an annual rate of 1.4% in the first quarter, yet economists (and much of the media) made it seem like everything would be just fine…

Let’s remember that GDP increased by 6.9% in the fourth quarter of 2021. So that’s a huge sequential slowdown. Yet most of the headlines masked that contraction with what they deemed “solid” underlying measures. A New York Times article suggested that the negative number “masked evidence of a recovery that economists said remained fundamentally strong.”

In other words, “don’t worry the economy is doing just fine…” But these very same people also previously claimed that inflation was “transitory.”

Now, these economists have way more credentials than me. And by no means am I saying I’m smarter than they are. I’m not. Economics is a difficult subject and difficult to get correct. However, much of this rhetoric comes from the consumer spending report. Consumer spending, the engine of the U.S. economy, grew 2.7% in the first quarter.

That’s solid. But let’s just think about this… With costs soaring, it’s pretty easy to see why spending is up: Everything costs more. Inflation is 8.5% for crying out loud! This is also coming at the expense of savings — the savings rate dropped to 6.2%, the lowest since December 2013.

Mastercard SpendingPulse reported last month that the U.S. online spending in March fell 3.3% year-over-year. That’s the first decline in that category since 2013. I’m also seeing signs of a slowdown creeping up in earnings calls this season. The point is that consumers are cutting back their online purchases, and they aren’t exactly headed to retail stores in droves either. That doesn’t seem all that healthy to me.

So it sounds like you’re painting a picture of “stagflation”. If that’s the case, then how should investors respond?

The two areas that typically do well in periods of stagflation, which is what we’re seeing (or about to see) are gold and commodities.

On the commodities front, over at Capital Wealth Letter, we own a premier pipeline company that transports oil and natural gas. It also sports a juicy yield of 7.1%. I’ve also written several times about my bullishness on oil & gas stocks. Our recent addition in this space is up 44% in less than three months, topping the S&P 500’s 9.6% loss over the same period.

On the gold front, already own one premier gold mining stock, which has also done well — up 17% since we added it in early January. But in our most recent issue, I recommended a new gold miner that I’ve been closely monitoring. After a strong rally, shares finally pulled back a level where I’m comfortable buying.

The other thing I’m doing is pruning our portfolio to raise some cash. Keep in mind that just because I’m selling these stocks doesn’t mean they’re “bad” companies all of a sudden. In fact, I still like nearly every stock that I recently sold. But it doesn’t matter how much I like a stock. If it’s going to continue drifting lower, I’d rather cut my losses here, step aside, let the dust settle, then redeploy that cash.

Any parting words of wisdom?

The thing readers need to know is that in bear markets, nothing is spared. Great companies sell off with terrible companies. It’s just the way it is. Sure, some will be able to weather the storm a little better, which is why I’m not selling everything and I’m mostly selling my weaker performers.

Plus, there’s a chance that I’m wrong. Maybe we’re closer to the bottom than I think. If that turns out to be the case, then I still want some money in equities. But I’ll also have some cash to put to work. Just remember, if you have a hard time cutting losses, a 50% loss takes a 100% gain to get back to even. You’re going to have a tough time doing that in a market like this…

P.S. Regular people are reporting seeing “strange” lights in the sky across the United States…

Maybe you’ve noticed them, too. But they’re not UFOs… instead, you’re looking at a revolutionary new technology…

According to our analyst, they’re about to trigger a $2.5 trillion tech disruption. And in a brand-new report, he reveals a way to profit from the carnage before anyone else. Go here to get the details right now.