We’re Already Up 30% With This Natural Gas Pioneer. Should You Invest?

A few weeks ago, I told readers the story of Edwin Laurentine Drake, the first man to drill for oil in Pennsylvania.

I also recounted how oil & gas has been a controversial “boom or bust” industry since its very inception, full of crazy stories and colorful characters.

Rockefeller was over in eastern Ohio, keeping a close eye on what was happening in Pennsylvania. At this point, he had already developed a successful commodity business.

But by 1863, at the age of 26, Rockefeller and a partner started a “side business” catering to the oil boom. He didn’t partake in the land grab or in drilling for oil. That seemed too dangerous and speculative. Instead, he was content buying and refining the oil into various products like kerosene and lubricants and marketing the end products throughout the world. He eventually expanded into oil transportation, infrastructure, and export.

But when oil busted again in the late 1870s, Rockefeller’s company — now known as Standard Oil — began buying competitors and consolidating the nation’s refining and transportation businesses. And after scouting the oil industry from the beginning, Rockefeller finally began buying the oilfields. By 1891, Standard Oil controlled 25% of America’s oil production.

A Modern Pioneer In Oil & Gas

Here’s why I bring this all up… In my previous article, I noted how the “boom” was back on once again – and investors still had time to profit.

CHK was founded in 1989 by Aubrey McClendon and Tom Ward with an initial $50,000 investment. The company initially focused on drilling in underdeveloped areas of Oklahoma and Texas, but it did things differently than traditional oil and gas companies. It largely abandoned the traditional vertical well drilling method. Instead, it employed lateral drilling techniques to free natural gas from unconventional shale formations.

Today, this lateral drilling technique is known as fracking. It is used by every oil and gas producer around the world. Chesapeake was a pioneer of fracking and helped turn the United States into a global energy powerhouse.

Making History – And Falling From Grace

Chesapeake originally debuted as a public company in 1993. It grew rapidly before the collapse of natural gas prices in the late 1990s sent its stock plummeting.

Undeterred, McClendon and Ward began building anew. Between 2003 and 2007, Chesapeake spent billions acquiring assets in nearly every major energy field in the U.S. It became the second-largest producer of natural gas, trailing only Exxon.

In some ways, Chesapeake became a victim of its own success, as other companies followed its lead and US energy production soared… driving down prices.

As Chesapeake was expanding at breakneck speed, natural gas prices were near $20 per million British thermal units (BTU). But as Chesapeake and other companies flooded the market with gas, it sent prices well under $2. 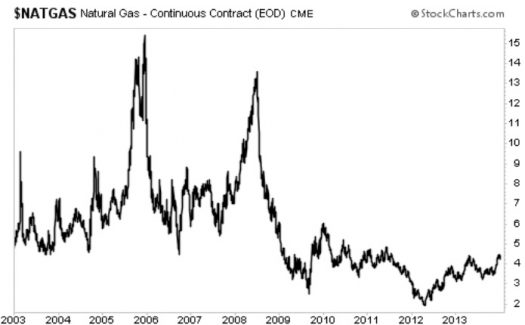 Then the financial crisis hit in 2008 and put even more pressure on energy prices. Shares of Chesapeake also tumbled.

By this time, co-founder Tom Ward had left the company. He went on to buy what is known today as SandRidge Energy (NYSE: SD). In 2013, after a shareholder revolt, McClendon left Chesapeake. But the damage was done. Chesapeake was saddled with an insurmountable amount of debt (nearly $13 billion). It did its best to stay afloat, but the writing was on the wall.

Shares fell more than 90%. The company conducted a 200-to-1 reverse stock split to boost share value back above $1. But in June 2020, the fracking pioneer entered Chapter 11 bankruptcy.

As the company emerges out of bankruptcy, everybody wants to know… will this time be different?

All signs are pointing towards Chesapeake restoring its former glory. Here’s why…

Post-bankruptcy, Chesapeake has new management, nearly $8 billion less in debt (only $1.3 billion remaining, and hardly any due until 2025). Low-cost operations, high earnings and cash flow, and a new focus on “delivering sustainable free cash flow and returning it to our shareholders,” as CEO Nick Dell’Osso stated on the most recent conference call.

One year ago, Chesapeake came out of bankruptcy with a market valuation of around $4.4 billion. Today it’s valued at nearly $11 billion — still a far cry from its $37 billion peak — and the same amount as the $11 billion in assets it has on its books.

Here are the highlights from 2021…

Strong financials and higher natural gas prices have sent shares higher (up roughly 50% YTD). Yet, the stock still trades for cheap. Granted the company is coming out of bankruptcy, so we can expect it to trade on the cheaper side until it proves itself. Shares trade at just 8 times next year’s earnings. Its P/S multiple is just 1.5x.

Back in February, we added CHK to our portfolio over at my premium service, Capital Wealth Letter. So far, we’re up more than 30% in just three months… 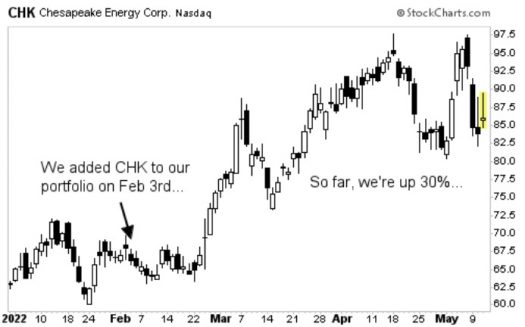 One thing to keep in mind… CHK still has a lot to prove. Oil and natural gas prices will be key here. When those start to fall, shares of Chesapeake will follow suit.

But until supply begins to catch up to demand, I expect natural gas prices to stay elevated, which means even bigger profits for Chesapeake Energy and its shareholders. So if you’re looking for a different way to profit form the energy boom (i.e. natural gas instead of oil), then consider CHK.

Editor’s Note: My colleague Nathan Slaughter may have found a pick with even more upside than CHK…