On April 20th I received a text message from a good friend. It was a screenshot of a stock chart followed by a question: “Good time to buy?”

Unless I’m a few whiskeys deep, I’m reluctant to talk about the market or stocks with friends and family. Not because I don’t want to help. I do. But when it comes to stocks and money, I likely understand their behavior and mindset better than they do.

You see, most novice investors treat the market like a slot machine. They pick a lucky machine, throw some coins in, pull the lever, and hold their breath.

When it comes to money, the human brain is not wired for clear thinking. Perhaps, it’s because the area of the brain that responds to financial reward is the same part that lights up from cocaine. This presents a major problem. It also makes it difficult to have a real conversation when I know that what most people are looking for is to strike it rich with one stock… They really want a get-rich-quick scheme.

That’s a terrific way to lose money — and quickly.

The stock in question was none other than Netflix (Nasdaq: NFLX). It reported dismal earnings and was down a whopping 36% when my friend texted me.

I told him that I would probably “let the dust settle” before throwing money at it. Who knows if he listened or if he tossed some cash at it. But sure enough, the stock has continued to drift lower since its earnings plunge. In fact, it is down another 20% after it gapped lower. 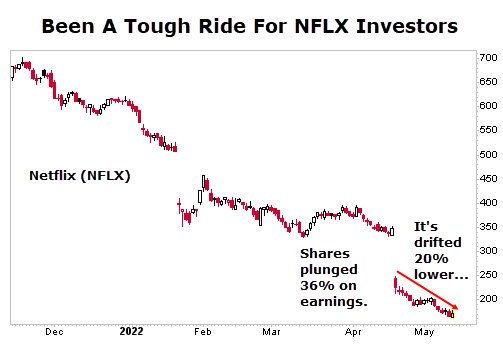 I’d much rather wait for shares of Netflix to find a bottom and begin trending up before I invested any money in it. And I wouldn’t be surprised if it eventually shows up in the portfolio of one of my premium services at some point. But it won’t be today…

The Psychological Roller Coaster Of Investing

It’s easy to see why folks like my friend are attracted to a stock like Netflix. Especially after a major plunge. On the surface, it’s an easy investment thesis to understand because they likely use Netflix. They understand what the company does.

But our inherent tendency to rely on what shares traded for in the past (known as price anchoring) plays another major role in why we like to bottom fish for stocks. After all, shares of Netflix traded for nearly $700 in November… just seven months ago. Now, shares are trading for less than $175. That’s a bargain… They’re bound to go back to that $700, right?

At least that’s the story (or investment thesis) that plays out in our heads when we come across a stock that’s trading down big. But more often than not, that bottom fishing strategy, or trying to catch a falling knife, ends up in more pain than pleasure.

Here’s what is likely to go through your mind when you try bottom fishing: 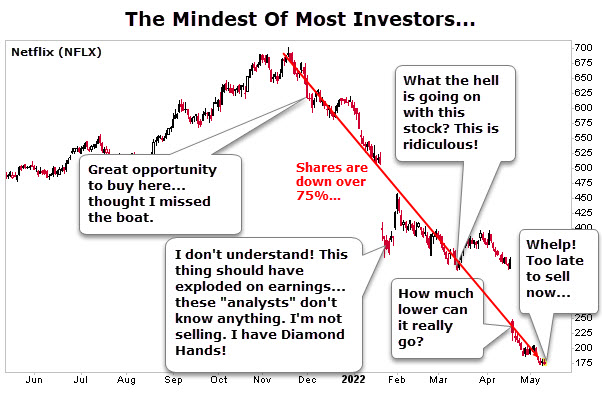 This is why it’s so important to follow sell signals, or at least have a stop loss in place.

I know I talk about this idea often, but this is the perfect explanation for why. Let’s say we had traded this stock, even if we bought at the very tippy top in November… Then let’s say we set a 20% stop-loss based on that high — we would have exited this position in the first week of January.

Now let’s do some math…

You’ve made up your loss, and are now up $400. By simply preserving your capital and moving on from your loss, you turned a defeat into a modest win.

In all honesty, the other guy is better off taking his $2,500, heading to Las Vegas, and throwing it all on 16 at the roulette table…

Instead Of Bottom Fishing, Do This Instead…

Instead of bottom fishing with Netflix, imagine if I had sent my friend a screenshot of a chart like Devon Energy (NYSE: DVN), whose shares are near 52-week highs. He probably would have thought it was a joke… after all one glance at the chart suggests that he already missed the boat. 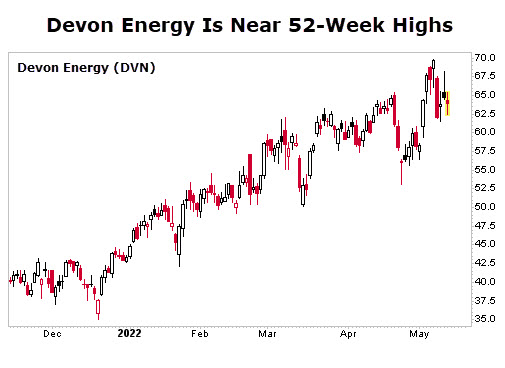 But as longtime momentum investors will tell you, winning stocks typically continue to win over the short to medium term. This seems counterintuitive to most people (buying stocks near highs). But it works. Sure, you may book some losers, but if you cut them quick and move on, you won’t let them swell into bigger losers.

This idea is especially important to understand in this market.

Understand that the stock market, and trading it, is an emotional roller coaster ride. Recognize that it will drive irrational behaviors and decisions in most investors. Once you fully grasp that concept — and more importantly learn how to control your own emotions — then you will be head and shoulders above the competition.

P.S. Reports indicate that Elon Musk’s secretive Starlink satellite internet service is already creating a MASSIVE buzz — and could come out of beta as soon as next month…

And even though Starlink is “off limits” to regular investors… we’ve uncovered a “Silent Partner” that gets you in on the ground floor… lightyears ahead of other investors.