The No. 1 Thing To Remember During Bear Markets

When the dismal gross domestic product (GDP) number (-1.4%) came out at the end of April, most of the financial talking heads shrugged it off. As I told readers of my Capital Wealth Letter, they leaned on the strong consumer spending report as their main argument as to why our economy was doing better than it seemed.

My rebuttal for this was Amazon’s underwhelming first-quarter earnings, where sales growth slowed to just 7% year-over-year. That was its slowest growth rate since 2001. The company also offered pretty weak second-quarter guidance.

My baseline assumption was that if the largest e-commerce retailer was struggling, then consumer spending wasn’t as strong as many had hoped or believed.

Further proof of weaker consumer pending came first on May 17. That’s when Walmart (NYSE: WMT) reported first-quarter results. And while the numbers themselves weren’t terrible (the company did miss earnings estimates), it was what Walmart was witnessing from its shoppers… discretionary spending was plummeting.

Shares of Walmart crumbled. They fell around 12% after earnings and shed roughly 20% in the days following. 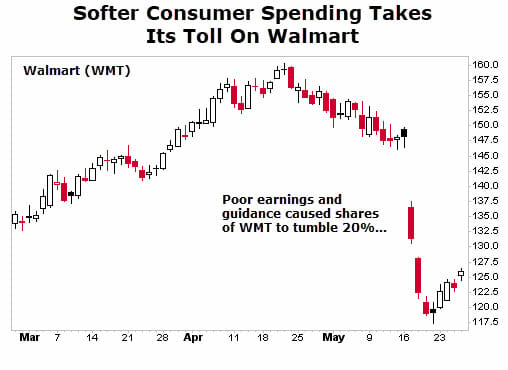 The next day, May 18, Target (NYSE: TGT) reported earnings and things were just as ugly…

Target missed earnings by $0.88, and management reiterated the fact that consumer spending was softening. Shares of Target plummeted around 24% on the news and have continued to drift lower… 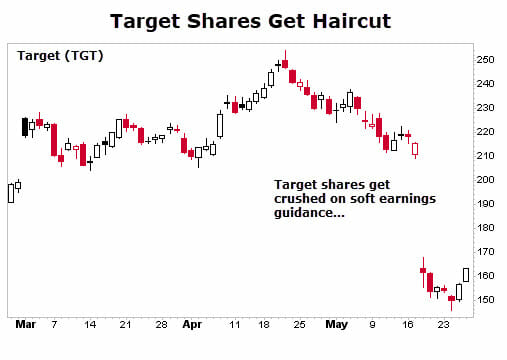 It seems folks are starting to realize that the Fed won’t be able to nail the “soft” landing that they were hoping for, and a recession is imminent. Of course, I realize that the stock market is not the economy. However, the two do seem to dance in unison.

The S&P 500 touched bear market territory on May 20, but a late-day surge helped it avoid officially closing 20% from its recent January high. Although it continues to flirt with bear-market territory…

Sure, the S&P 500 hasn’t officially entered bear market territory, but the Nasdaq is down 29% as I write this. Small-cap stocks, as measured by the Russell 2000, are also down 29%. And many high-flying tech stocks are down as much as 80%.

And here’s the best advice I can offer right now… Stop me if you’ve heard this before, but the best way to protect yourself is to actually follow your sell signals. It’s painful. I know. But exiting a position when you hit a stop or sell signal will help you survive a bear market. I know the psychological toll and mental fortitude it takes to close out a trade at a loss. It is difficult. But as I always say… don’t think of it as losing. Think of it as winning. Winning by avoiding a bigger loser.

Some of you know that I run another premium service called Maximum Profit. Thanks to the way the system is designed, we have hard-and-fast rules for selling. That’s worked out well for us over the years… And while I don’t want to brag about closing out a losing position, I am sure as heck happy that I exited these trades when a sell signal was triggered…

But here’s how the stock has performed since then… 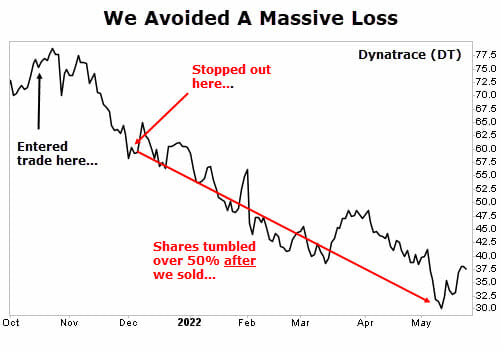 Yes. We booked a loser. But as you can see, it hasn’t been pretty for shareholders since we exited the position. Think about this… people who decided to hold on for whatever reason have lost 60% of their investment.

That is very tough to recover from.

Here’s another example. On October 29, 2021, we entered into Salesforce (NYSE: CRM). The trade didn’t pan out and we closed out with a 15% loss on December 21. Again, sucks to book a loser, but we avoided massive destruction of our capital. Take a look… 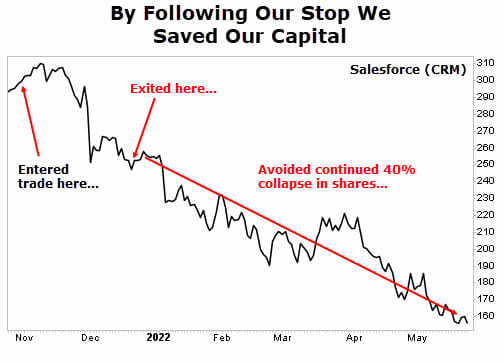 Again, a 15% loss is something we can easily recover from. Folks who didn’t sell have lost half their money from the original recommendation date.

But here’s the thing… Surviving a bear market isn’t only about avoiding portfolio-destroying losses. It’s also about keeping your profits and not riding stocks all the way back down. Case in point… InMode (Nasdaq: INMD) is a trade we made last summer. We entered in June and exited just four months later for a nice 50% gain. However, if you didn’t follow the sell signals and held on… well, you’d be down over 50% today. 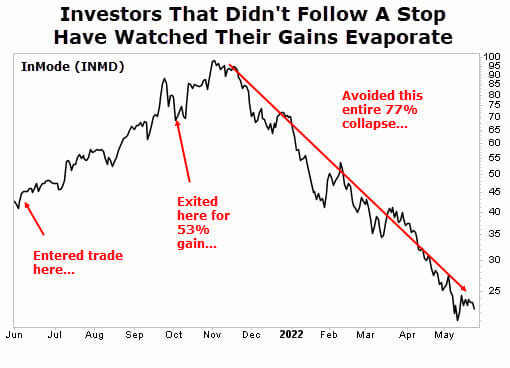 Think about that for a second. If you made a $10,000 investment and followed our sell signals you would have walked away with $15,000 in four months. Or… You’d be down $5,000 had you decided to ignore our sell rules and hold on.

Booking winners is nice. But when the market gets rough, you need to be able to live to fight another day.

During bear markets, your number one goal isn’t profiting… It is surviving.

Yes, the bad times set up the good times. And we will eventually have some wonderful opportunities. But that won’t help if you go broke along the way.

Protect yourselves today. Because things can always get worse.

Editor’s Note: If you missed the boat on PayPal and Tesla (or wish you could invest in SpaceX), then you’re going to want to hear about Elon Musk’s latest project…

And even though it’s currently “off limits” to regular investors, we’ve uncovered a “Silent Partner” that gets you in on the ground floor… lightyears ahead of other investors. It’s easily one of the biggest growth opportunities I’ve seen in years — and you can go here for all the details now.