These “Offshoot” IPOs Crush The Market, But Are Ignored By Wall Street…

I grew up in a small town in Idaho.

Although the blessings greatly outweighed the curses, it turns out I didn’t know much about the world outside of my village.

My naivety caught up to me (again) when I was fortunate enough to tag along to New York City and Wall Street for a company’s initial public offering (IPO). The CEO of the company and the top executives stood on the podium and rang the ceremonious bell that heralds the start of trading (and the company’s first day as a publicly-traded company).

While in New York City I met up with my godmother, who lived in the Bronx at the time. She said she would meet me at my hotel and asked where I was staying…

I couldn’t quite get the hotel name right as I had never heard of it. I told her it was a funny name like “Astoria” or something.

She jokingly asked, “the Waldorf Astoria?”

“Yeah, that sounds right,” I replied. Turns out the Waldorf Astoria is a pretty well-known hotel. I had never heard of it.

My Seat At The IPO Circus

It was an eye-opening experience, as I was just getting my feet wet in the financial world. The amount of money that it entailed, and the gobs of cash people were throwing around was mind-boggling.

Fancy hotels, chauffeurs, appetizers, and food I’d never heard of. Coupled with elegant cocktails out of crazy-looking glasses… I was clearly out of my element.

After all, just 12 months prior I had been living out of my backpack in South America.

But the IPO game is one giant marketing extravaganza.

There are roadshows to gain interest and investor money. It takes on average 18 months for a company to cross the finish line and begin trading on an exchange.

That’s chump change compared to the fees that the underwriters, lawyers, advisors, and auditors collect. When it’s all said and done, we’re talking about hundreds of millions of dollars, on the low end.

But in the end, it is typically well worth it for these companies. Because if they manage to stir up enough hype… retail investors (you and me) will be salivating at the chance to snag a few shares.

You always hear about XYZ stock surging double digits on its first day of trading. But the truth of the matter is that very, very rarely are regular folks like you and me enjoying that surge, as it’s difficult to get in at the original IPO price. But this is exactly what Wall Street wants. The bigger the hype, the higher the stock surges on IPO day and the more money they make as they cash in on their options.

I’ve repeatedly written about the perils of investing in IPOs, and how it is typically a foolish move. However, there’s another way companies can get listed on exchanges that don’t get much (if any) fanfare. And it’s typically a much better deal for regular investors like you and me.

And no, I’m not talking about SPACs.

IPOs get all the attention. Rightfully so — trunk loads of money are spent for that attention.

But much like I was naïve to the riches and glamour of Wall Street (and Ivy League schools), I’d bet most retail investors are naïve to spin-offs.

A spin-off usually happens when a businesses or division that has existed within a larger organization is made into its own separate company. Usually, management will do a spin-off when it thinks that one or both businesses should be worth more than they are presently being valued. Other times, a company will want to split off a fast-growing division from a more mature business, or vice versa.

Whatever the reasons, the goal is ultimately to unlock value.

And for that reason, spin-offs are fertile ground for outperforming stocks.

You see, spin-offs are often ignored by Wall Street and most investors. Part of that may be suspicion. They may see a spinoff company as damaged or discarded goods. Other times, there may be a new management team in charge, and investors may not be sure how they’ll perform on their own. Whatever the case, they certainly don’t get the media attention of IPOs, nor do they have the Wall Street hype machine working in their favor.

But in most cases, spin-offs outperform the broader market.

One glance at the chart below and you’ll see that Huntington Ingalls has outpaced the market by more than 2-to-1. 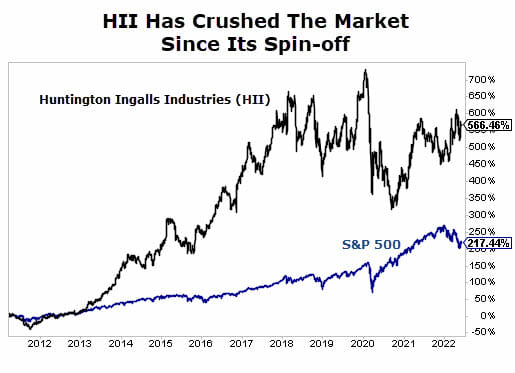 In past iterations of my premium newsletter, Capital Wealth Letter, our readers profited from this spin-off advantage. In November 2009, Sally Beauty Holdings (NYSE: SBH) was recommended shortly after Alberto-Culver spun out the beauty-supply-distribution business. 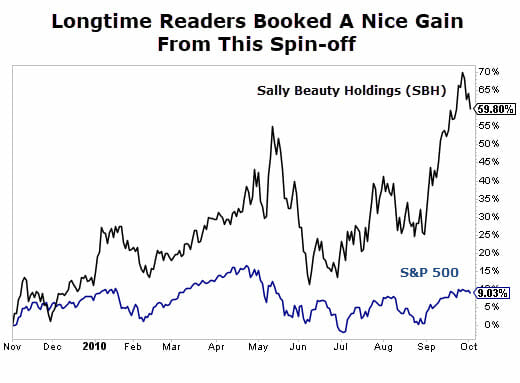 In less than a year the stock was up nearly 60% where we locked in the gains. For comparison, the S&P 500 delivered a 9% return over the same period.

A more recent example is the agriculture business, Corteva (NYSE: CTVA), which was spun out of DuPont de Nemours (NYSE: DD) in June 2019. Since Corteva became its own entity, it has crushed the S&P 500, delivering a whopping 160%-plus gain since then, compared to the S&P’s 50% return. 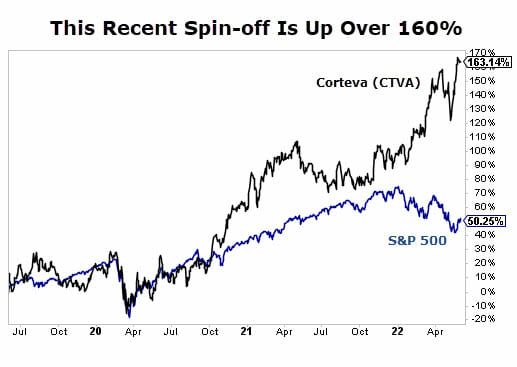 Over at Capital Wealth Letter, I recently pinpointed a recent spin-off that not only flew under Wall Street’s radar, but it operates in a massively underserved — and growing — market. If history is any guide, we should make out pretty well.

I’m saving that pick for my premium subscribers, but there’s plenty to choose from. In fact, here’s a table of some recent spin-offs I compiled from some cursory research…

And below is a list of well-known companies that have plans to complete spin-offs soon:

The examples are endless… but the bottom line is that these overlooked “offshoot IPOs” can provide investors with stupendous returns.

If you’re looking to profit from spin-offs, then these names are a good place to start.

P.S. The space economy is forecasted to soar sevenfold to $2.7 trillion in the years ahead. And there’s one guy who leading this space race… Elon Musk.

And while regular investors like you and me can’t invest in his most audacious space plans — like SpaceX and Starlink — I have found “backdoor” way to get in on Starlink, which I’ve detailed in my special report, “How to Profit From Starlink’s Secret Partner.”

If you’re interested in getting your hands on this free report, go here.