I wouldn’t want to have been in Jerome Powell’s shoes last week. The embattled Federal Reserve Chairman made his semi-annual address to Congress and was later grilled with some difficult questions by lawmakers.

The central bank wields immense power and control, but with great power comes great responsibility. One of the principal tasks, of course, is to maintain the price stability of goods and services. In that regard (with inflation spiraling out of control and running at the hottest pace in 40 years) it’s hard to summarize the Fed’s recent job performance as anything other than abject failure.

If this were a football game, the home team would be heading into the locker room at halftime down 35-0. And now the head coach is awkwardly trying to explain to a sideline reporter what went wrong and promising to make some big defensive adjustments in the second half.

But digging out of this hole won’t be easy.

Warning signs of latent inflationary pressures were crystal clear and difficult to ignore. Even some members of the Fed’s own inner circle sounded the alarm. Yet, they were stubbornly dismissed from the ivory tower and the monetary policy needle remained firmly stuck in the most accommodative setting.

Until it was too late.

Token quarter-point hikes won’t get it done. Even half-point increases are insufficient at this point. So more aggressive “adjustments” must now be made. The Fed was just forced to stomp on the monetary brakes and boost its target rate by three-fourths of a point. For the record, we haven’t seen a move this drastic since Alan Greenspan was calling the shots in 1994.

Naturally, the market’s reaction was hostile. Remember the sheer panic at the onset of the pandemic in March 2020, when the S&P retreated 6% in a single week? Well, it just matched that decline.

This tightening cycle couldn’t have come at a worse time. Corporate earnings growth had already decelerated to little more than stall speed. FactSet is expecting S&P profits to inch up just 4% next quarter. And now, consumer fatigue appears to be setting in. Remember, consumer spending accounts for about two-thirds of GDP.

Goldman Sachs sees a 30% chance of recession on the horizon. Bank of America puts the odds even higher at 40%. Many companies would say we are already there. Even the unstoppable Amazon is expected to post back-to-back quarters of bottom line weakening, the victim (like many retailers) of supply chain woes and inventory bloat. 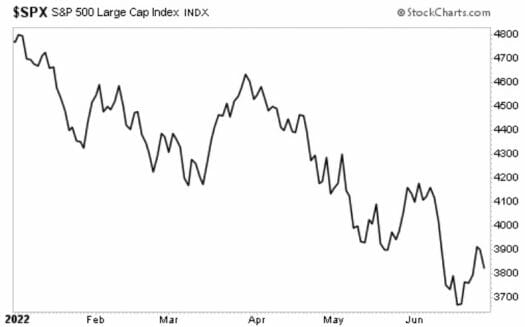 Fortunately, with the S&P sliding 23% (its worst yearly start since 1932), the impact of a recession has largely been priced into the market at this point. History would say this drubbing hasn’t fully run its course. The average bear market decline in the post-war era has been 29.6%. Still, we are probably closer to a bottom than a top.

You can understand why consumers might be a little tight with their pocketbooks right now. Record high gas prices act as a silent tax, slowly siphoning money from the household budget. Inflation is also taking a toll, particularly in the grocery store checkout aisle. Even the tumbling stock market is partially to blame.

You may have heard of the “wealth effect”, a psychological behavioral pattern of increased spending when 401(K)s and other portfolios are rising. Well, we are seeing the exact opposite phenomenon now as sagging account values dampen enthusiasm and shoppers grow more circumspect with their purchases.

Listen to enough quarterly conference calls, and you can’t help but notice that demand for big-ticket discretionary goods (like kitchen appliances) has waned in recent months. But some niche markets aren’t particularly prone to cutbacks.

This is usually the part where we’d talk about something like a defensive consumer staple pick. Nothing wrong with that. But, remember, I think we may be closer to the bottom than it feels. That’s why I’d encourage investors to look a little deeper for ideas that not only have defensive qualities, but also long-term upside.

That’s why over at my premium service, Takeover Trader, we targeted an up-and-coming retailer in the pet supplies business.

A decade ago, we spent $45 billion annually on our furry friends. According to the American Pets Products Association (APPA), that figure has since doubled to $109 billion. Keep in mind, nearly three-fourths (70%) of all U.S. households have at least one pet.

After a furious runup during the “stay-at-home” rally, this stock fell from grace — and is now trading at the same level it was before the pandemic. But the business is three times larger than it was before. Between this and the recession-resistant nature of the business, our downside should be limited. And in the long-run, the future for this business looks bright — that is, if a bigger fish doesn’t swallow it up for a premium first…

Bottom line, I think it’s time to get a little defensive — but that doesn’t mean we have to sacrifice upside. It just means we have to look harder.

P.S. In this uncertain market, I can tell you one thing that is certain: Larger companies are on the hunt for smaller targets. Flush with cash and eager to make a deal to fuel growth, I expect a wave of deals to happen in the coming months.

Even the whisper of a “mega-merger” can hand investors enormous returns. And over at Takeover Trader, I’ve just pinpointed a potential takeover deal that could dwarf them all.

Want to get in on my next big trade? Click here for details.