I won’t sugarcoat it. It’s been a massacre in the cryptocurrency world.

Skeptics of cryptocurrencies are probably relishing at the “failed experiment” that they believe cryptocurrencies to be. And at this point in what’s been dubbed “crypto winter”, it is hard to argue with them.

And the major cryptocurrencies in the space – Bitcoin and Ethereum – have shed 70% and 80% of their values, respectively, since their peaks in November 2021. 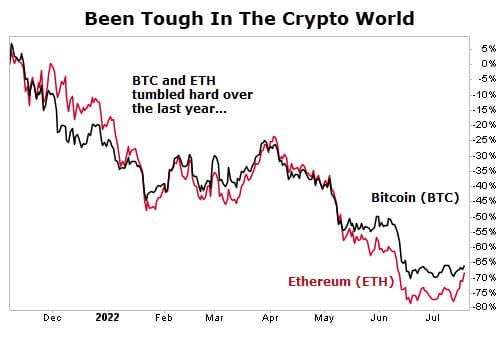 It hasn’t been pretty, to say the least. And speculators in this space have lost a lot of money lately. But that doesn’t mean cryptocurrency is dead. In fact, I believe we’re getting a rare “second chance” opportunity in this space. I’ll explain why in just a moment, but first it’s important to understand what’s going on…

What’s Behind The Crypto Collapse

This may seem like a complex topic, but the best way to understand it may be by looking back to another bubble collapse.

When Lehman Brothers collapsed during the financial crisis in 2008, many other banks were also in trouble and had to be bailed out.

As we now know, these major financial institutions are very intertwined. At that time, most had major exposure to subprime loans that were defaulting. The ripple effects from risky mortgage-backed securities (MBSs) and collateralized debt obligations (CDOs) were widespread.

In a similar fashion, the crypto world is also very intertwined.

At the center of this ongoing crisis is the hedge fund that I mentioned above — Three Arrows Capital (3AC). Much like banks during the financial crisis, this crypto hedge fund played fast and loose with its money. It made sizeable leveraged investments in Bitcoin and Ethereum. It also took massive positions in risky small-cap altcoins and borrowed millions against them.

It was one of the largest borrowers on major lending platforms. Then last month, 3AC defaulted on loans worth more than $670 million.

The holder of these loans? Voyager… the digital asset brokerage that filed for bankruptcy.

That default sent shockwaves through the cryptocurrency system. It became clear just how connected these crypto platforms are. Panic spread, and folks rushed to pull money off platforms, which triggered even more uncertainty. That doubt crept into every corner of the crypto world, including top coins like Bitcoin and Ethereum — although neither coin is directly tied to the mess.

We’ve Seen This Before

Anyone who has followed the cryptocurrency world for some time, and Bitcoin specifically, knows that this isn’t the first time it has collapsed. In 2014, Bitcoin’s price crashed when the Mt. Gox exchange collapsed. And in 2018, Bitcoin’s price fell 80% as hundreds of “initial coin offerings” (ICOs) crashed and burned. 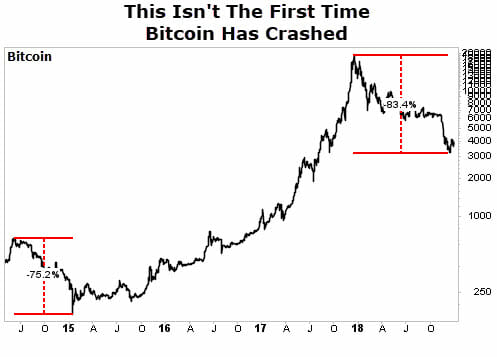 Those sort of “life-changing” returns are going to attract a lot of speculators, which is exactly what happened. When too many people pile into a trade, a bubble forms. And when it pops, it’s a violent collapse.

We’ve seen this happen outside of the crypto world going all the way back to Tulip mania in the 1600s. Other examples include the dot-com bubble at the turn of the century and the housing bubble in 2008.

While it’s disturbing to go through, it is almost necessary to shake out the bad players.

Many cryptocurrencies, crypto platforms, and crypto funds will go out of business. But when it is all said and done, patient and savvy investors can wade through the rubble and find some excellent opportunities. The top cryptocurrencies and platforms will prevail and become stronger.

This isn’t the end of cryptocurrency as many skeptics believe. Far from it, in fact…

Even though the crypto market is wrapped in uncertainty right now, the development in this space over the past six years has affirmed my views on how incredibly transformative and disruptive cryptocurrencies can be.

Yes, cryptocurrencies are in the midst of a bear market. But in all fairness, so are stocks and bonds.

I believe we will see Bitcoin and Ethereum rebound from these fear levels eventually. And I’m not alone…

Billionaire fund manager Bill Miller stated in a CNBC interview in May that he’s putting 50% of his net worth into Bitcoin. That’s a huge endorsement. And he’s not the only wealthy individual, wealth manager, or hedge fund adding to their stake here.

It’s clear that the “smart money” is seeing the opportunity here. So the bottom line is that if you hold Bitcoin and Ethereum, weather the storm. Remain patient. And when the dust settles, the crypto world will be stronger, and it will be ripe with opportunity.

Since I began covering cryptocurrency over at Capital Wealth Letter, I’ve heard from many readers who wished they had the chance to enjoy the previous runup but didn’t take advantage. If you’re one of them, then I believe you’re getting a second chance…