In 1957, Bill and Dr. Carol Angle were like any other husband and wife. They wondered about their financial future: making ends meet, retirement, etc.

The Angles heard about an investment class being taught by a bright 21 year-old kid. Rumor was, he impressed just about everyone he came in contact with. So, they decided to check it out. They joined about 20 other folks that night for the class, called “Investing Principles.”

What the Angles didn’t know was that this kid wasn’t just impressive… He was also a genius. As the story goes, by the end of the talk, Bill Angle announced to the crowd, “I’m putting $10,000 in. The rest of you should, too.”

Carol Angle was a believer, too. They would later up their contribution to $30,000 — half their life savings. It turned out to be the best decision they ever made. The Angle family is worth more than $300 million today.

There are dozens of families with a similar story. A 1998 article in Forbes mentioned that there were at least 30 families in the local area, and many more elsewhere, worth at least $100 million.

All thanks to a young man who had to take a Dale Carnegie course on public speaking before he had enough confidence to get up in front a crowd.

By now, you can probably guess who I’m talking about. 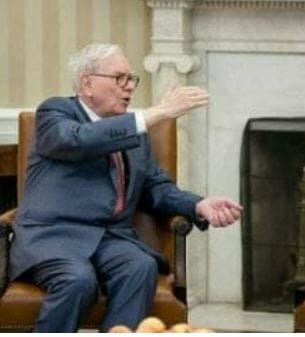 Many already know the story of Berkshire Hathaway (NYSE: BRK-B). In 1962, Warren Buffett began buying the shares of a struggling textile company, which at the time was trading well below its book value.

As you probably know, insurance companies collect premiums and hold them until presented with claims. In the meantime, it can invest that money — called the “float” — and earn a nice return. Buffett and Berkshire simply take the float and buy undervalued companies that generate even more cash.

The point is, sometimes investors forget that it isn’t just Buffett who became rich from Berkshire Hathaway. The regular folks who invested with him amassed great wealth, too. And while I don’t claim to be the next Warren Buffett, the truth is that regular folks don’t have to hit the lottery by happening to meet the next Warren Buffett, either. Instead, we can try to emulate Buffett’s success by examining his investment approach.

Buffett is one of a handful of names that are discussed when referring to “value” investing. And while the term can sometimes be misleading, and we can argue whether Buffett’s investing style today can be accurately deemed “value, I’ll take a stab at offering some general thoughts on the approach individual investors should make when researching picks.

Unfortunately, there’s no predetermined formula that will allow investors a clear-cut path to uncover the best picks. Investing is always a delicate balance of both art and science.

To pinpoint sharply undervalued stocks, you can start by quantitatively screening for companies that score well in the key valuation metrics like book value, cash flow/enterprise value, and RoIC (my personal favorite), as well as a host of other important fundamental criteria. However, don’t assume that a list of names that filter through ratio analysis screening is all that is necessary to identify winning stocks. Each idea generated by those screens needs to be carefully evaluated, and a close examination of non-numerical data should also be weighed.

Next, consideration should also be paid to the company’s industry and whether or not the firm has a recognizable edge over its peers. We always try to invest in companies that benefit from a variety of distinct and defensible competitive advantages. These advantages could take the shape of a powerful brand name, a unique product, or even a patented technology. Remember, companies with sustainable competitive advantages are much more likely to maintain a high level of profitability than those without them.

It is also a good idea to determine whether a company operates in a cyclical market, like automobiles. Ask yourself whether or not the company’s economic moat is wide enough to protect the firm’s profitability under difficult conditions.

Knowledge is power, and it is always important to know as much about a prospective company’s operations as possible. This includes a thorough look at its industry, its vendors, its customers, its competitors, etc. Digging through old press releases posted on financial websites is a good starting point. The company’s most recent quarterly and annual reports should also be required reading. Keep in mind, though, that press releases written by a firm’s investor relations department will nearly always paint the company’s prospects and results in the most favorable light possible. Therefore, it is important to balance that information with objective analysis from other sources.

Remember, the most valuable articles or bits of information can sometimes run contrary to your opinion on a company. In other words, don’t fall prey to ignoring possible warning signs simply because they challenge your thesis on a stock; instead try to poke holes in your own arguments. This will help eliminate costly investing mistakes and allow you to invest with more conviction.

If you know anything about Berkshire, then you know that Buffett’s record gains are near impossible to duplicate. That’s okay, because the truth is we don’t have to…

But keep in mind that successful investing doesn’t necessarily involve uncovering an abundance of potential picks. The key is to be right when you do find a good one. When you’ve finally made up your mind, invest with confidence and hold for the long term.

My High-Yield Investing readers and I do have something in common with Buffett. We share a love of cash and compounding.

You see, many of our readers use the dividends generated by our portfolio to buy even more shares of our holdings. The result: dividend paychecks that grow with each passing month.

By reinvesting dividends in each one of these holdings, they’re able to create an income portfolio that’s grows with each passing year. When they’re ready, they can simply “flip the switch” to live off the income for retirement.

The truth is anyone can create lasting wealth in the market by using a “get rich slowly” approach like the one we use over at High-Yield Investing. It’s not too late for you to get started, either. All it takes is a solid foundation. That’s why I just released a new report about five “bulletproof” income payers who have proven to be so strong, so reliable, and so generous… that they can be counted on, no matter what happens with the economy.

This group of high-yield stocks has the ability to serve as the bedrock of your portfolio. They’ve all provided fantastic long-term returns, growing dividends (and their share prices) with each passing year. And I have little doubt that they’ll continue to do so for years to come.