Market Jitters Have Put Some Quality High-Yield Stocks On Sale…

I don’t remember too much about 1970 (wasn’t even born for a few more years). But it doesn’t sound too groovy. The Vietnam war was raging. The Beatles broke up. And the Apollo 13 moon mission nearly ended in disaster, resulting in that famous call to mission control “Houston, we’ve had a problem.”

Well, you have to go back to that era to find a more dismal investment environment than the one we’ve been stuck in. Through the first half of 1970, the S&P 500 retreated 21%. Over the same time frame in 2022, the market fell 20.6%, making this the steepest decline in 52 years.

There are some economic parallels between now and then, not the least of which is stubbornly high inflation. Let’s hope the outcome is the same. After tumbling in the first half of 1970, the market did a 180 and bounced 27% in the second half.

We might follow a similar course, but that will depend on the depth of this economic slowdown. Morgan Stanley puts the odds of the U.S. sliding into recession at 50/50. Personally, I think we’re already there. So does Wharton finance professor Dr. Jeremy Siegel, my favorite economist (I have a signed copy of his book, The Future for Investors, in my office).

A recession is generally defined as two straight quarters of contracting economic output. Well, we are at least halfway there following an anemic 1.6% decline in first-quarter GDP. The economy didn’t appear to make too much headway in the second. At best, it stalled out just on the positive side of zero. We’ll know more soon.

Against this macro headwind, “blended” quarterly earnings (companies already reported, plus estimates for those yet to report) for S&P 500 firms are up just 4% last quarter. Negative earnings revisions have outpaced positive ones by a two-to-one margin in recent weeks. 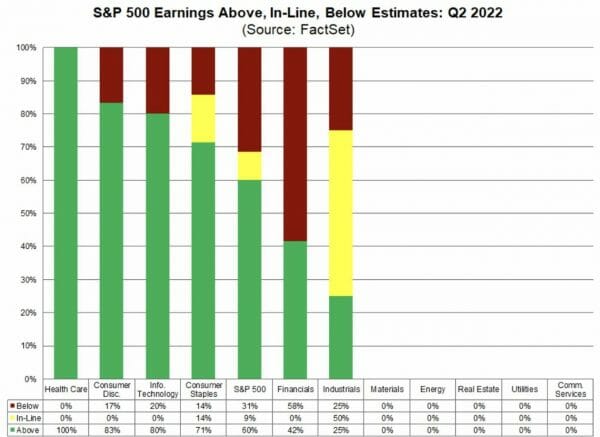 Ordinarily, the Fed would ride to the rescue and stimulate activity. But we’ll see no such heroics this time. Instead, the central bank has been cast as the monetary policy villain, hiking interest rates by a quarter-point, and then a half-point, and most recently by three-quarters of a point.

That salvo of shots hasn’t sunk the inflation battleship, though. Or even slowed it. Actually, the pace has quickened. After steaming ahead at an 8.6% annual clip in May, consumer prices rose 9.1% in June. For the record, economists were anticipating CPI growth of 8.8%, meaning they under-estimated inflation for the 23rd time in the past 25 months. 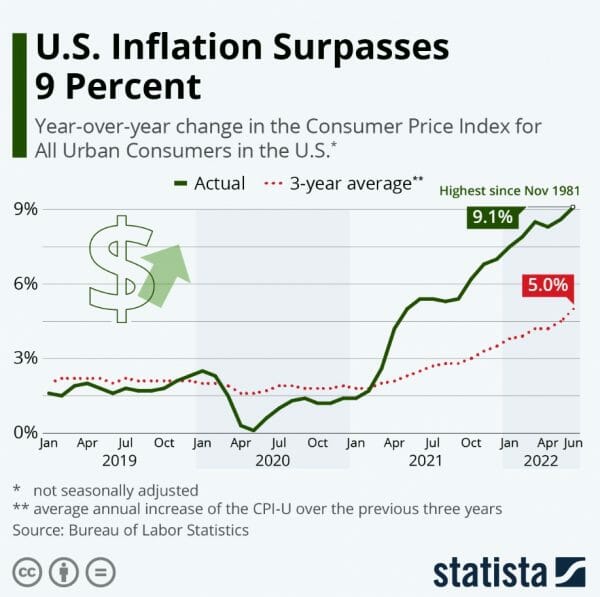 Quality Yields Are There For The Taking…

The market is currently pricing in a short and shallow recession. If that scenario unfolds (or we manage to narrowly skirt a downturn), then the market could rally sharply from here. But if the Fed has to tighten more aggressively, and if this economic malaise deepens, then it could get even uglier for investors.

We’re not in the business of forecasting short-term bends and twists in the market. My job is unchanged: to find quality income-bearing securities trading at a discount to what they’re really worth. Considering most stocks have lost a quarter (or more) of their value over the past three months, this selloff has made that search a little easier.

Back in January, Morningstar calculated that the average stock in its coverage universe was trading at 105% of its fair value. Needless to say, paying 105 cents for a dollar’s worth of assets is not the recipe for success. But now, entire sectors are trading at 65% to 75% of their fair value, a comfortable margin of safety.

That’s what bear markets do.

I’m reminded of the Crater of Diamonds Park, just a few miles from where I live. It’s the only place in the country where you can hunt for diamonds and keep what you find. One lucky visitor recently walked away with a whopping 4.38-carat beauty. Amazingly, it was found right on the surface – no digging or sifting required. These once-hidden stones have a way of turning up after a torrential rain.

Likewise, unearthed dividend gems can shine brightly following storms in the market. Let me give you a few examples…

A $100,000 portfolio invested equally in these five stocks back in January would have generated $1,960 in yearly dividends. Today, the same stake in the same businesses will throw off $3,300, to say nothing of potential appreciation.

That’s $33,000 over the next decade, assuming zero growth in the underlying distributions. But the chances of that are slim to none. Each of these stocks will likely pay out more tomorrow than it does today. Even a modest 5% annual bump would lift the annual income stream past $5,000 by year ten – even more with dividend reinvestment.

Did you spot a connection between the companies in this table? They are all distinguished members of the Dividend Aristocrats club, having raised dividends anywhere from 36 to 64 consecutive years. These time-tested businesses have weathered all kinds of storms over the decades, always showing the financial fortitude to not only maintain dividends but increase them year after year.

Yet, yields in this group tend to be rather ordinary. Most have historically hovered between 1% and 2%. That’s the one knock against the Aristocrats. Of course, it’s not for a lack of trying, but rather steadily rising share prices keeping the yields in check most of the time.

You’ll notice I said “most” of the time. Even these defensive stalwarts have been punished in this selloff, giving investors the chance to lock in payouts that these stocks seldom offer.

Any one of the five names listed in the table above are worth consideration. But if the market is offering us opportunity here, imagine what’s in store for the rest of the market…

That’s where my latest report comes in… In it, you’ll find 5 “Bulletproof Buys” that have weathered every dip and crash over the last 20 years and STILL handed out massive gains. And each one of them carry high yields, with dividends that rise each and every year.