Most of the time, we don’t recognize a technological revolution until it’s already happened.

This has been true since the invention of the automobile and the internal combustion engine. Sure, travel was forever changed. But at the time, there were doubters.

Then, passenger airplanes came along and once again altered how we moved around the world. But it wasn’t too long before when people questioned whether man would even be able to fly.

Think about Apple. Every time the company introduced a new product (from the iPod to the iPhone to the iPad, etc.) there was always a chorus of skeptics.

We all know how that turned out. 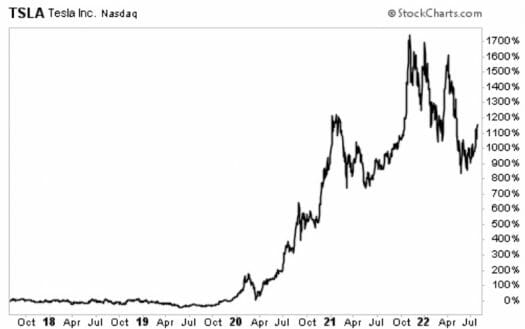 It’s easy to look back and laugh at the foolishness of the doubters. But the honest truth is, as easy as it sounds, it’s just downright difficult to see far into the future and know exactly how life changing a new technology will be.

But when something does come along that revolutionizes an industry, investment dollars flow in and savvy investors who got in early were able to capitalize and become rich.

Right now, I believe another revolution is underway that eventually could change life as we know it. And if I’m right, I think it has just as much (and quite possibly more) potential for gains than Apple and Tesla.

I’m talking about the 21st century’s version of the “race to space.”

For the past year or so, I’ve been telling my Capital Wealth Letter readers that a new “space race” is taking shape right before our eyes.

Let me be clear: No, I’m not talking about celebrities and rich folks forking over millions of dollars to launch into outer space. Those stories are fun, but they’re a distraction from what’s really going on.

I’m not even talking about Elon Musk’s dream of colonizing Mars, either.

You see, the real space race is much different than most people think.

I’ve been knee deep in research on this for over two years now. And I’m convinced that commercialized space will be mainstream in the not-too-distant future. Practically every major company (particularly tech companies) will have some sort of presence in space.

Don’t just take my word for it. Companies like Amazon, Microsoft, Boeing, Google-parent Alphabet (and more) are quietly laying the groundwork to compete one way or another in space.

As I’ve said before, it will take some time. But mark my words, it’s going to happen.

You have to understand that we are still in the early innings of this massive trend. But the investment dollars are flowing already.

Consider this… according to BryceTech, last year saw a record level of investment ($15.4 billion) in space-related startups. Nearly $30 billion has been invested in the last three years alone. 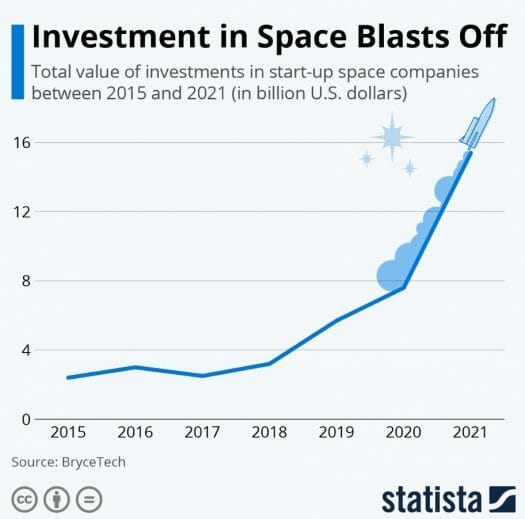 There will be a lot more where that came from.

My prediction is that hundreds of billions of dollars will flow into the space industry in the coming years. Morgan Stanley estimates “the global space industry could generate revenue of more than $1 trillion or more in 2040, up from $350 billion currently.”

If you’re looking to spread your bets, consider either the ARK Space Exploration & Innovation ETF (ARKX) or the Procure Space ETF (UFO). Both are pure-play space-related ETFs that own a basket of holdings spread across different areas of the market.

But remember, just because this gives you broad exposure to this trend doesn’t mean the ride won’t be volatile.

Right now, the battle for control of space is taking place over satellite infrastructure. As we speak, several companies are deploying “low earth orbit” satellites to bring high-speed broadband internet to the globe.

This is a topic I’ve written about extensively, so I won’t bore you with all the details today. But it’s my preferred way to profit from the emerging space race right now.

This is a massive growth opportunity. One we don’t want to miss.

Of course, there are plenty of risks. So we don’t bet the farm on investments in this burgeoning sector. But mark my words, early investors in a handful of emerging “space race” names are going to see shares skyrocket… making patient investors a bundle of money.