This Big News Tells Me The “Crypto Winter” Is Nearly Over

It’s been a painful few months in the cryptocurrency space. There’s no way to sugarcoat it.

Since March, Bitcoin and Ethereum are down 51% and 44%, respectively. Those few months feel like a lot longer. That’s what deep losses do to the psyche.

But here’s what you need to remember. Ultimately, bitcoin would rip off a 2,000% gain in three years from the bottom during the previous “Crypto Winter”.

Much like investing in world-class companies, this is a marathon — not a sprint. I warned my premium Capital Wealth Letter readers that we would see some wicked volatility. But even though I knew it would happen, it’s always a tougher slog than you imagine.

With that said, some exciting developments in the crypto world have me hopeful. You see, I don’t think this second Crypto Winter will last two years. In fact, I think it is nearly over.

Let’s take a look at what happened during the last Crypto Winter, and then I’ll explain why this time may be different.

What Happened During The Previous Crypto Winter

To say those days were exhilarating would be an understatement. Unfortunately, that excitement was limited to a select group of individuals: Folks who were early and who really believed in this new digital currency.

For most regular folks and, more importantly, large financial institutions, crypto was just a fad. Maybe even a scam. It certainly wasn’t something big banks and Wall Street fat cats were worried about.

Then, the first Crypto Winter came. This asset class cratered by over 80% in 2018, and the naysayers and skeptics were basking in glory.

It was a slow grind after that… lasting two years. It wasn’t until December 2020 that bitcoin topped its previous high set in December 2017. 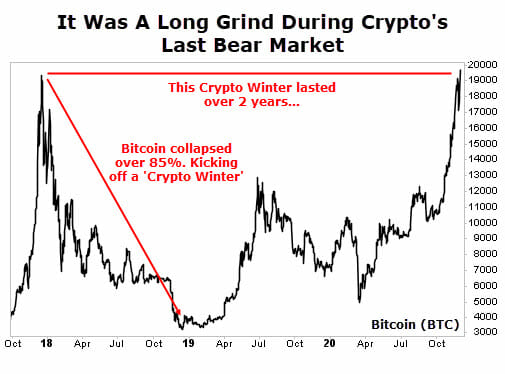 The biggest problem during the 2018-20 crypto bear market was no new demand for crypto. It was just the same select group of people trading the same coins. This lack of new demand was why bitcoin and the entire crypto space languished for over two years.

But then something interesting happened…

The Federal Reserve really began to crank up the printing presses. Massive amounts of money began flooding the system.

Worries about inflation began to surface. And some big players stepped into the crypto space as an inflation hedge. Billionaires and hedge fund managers like Paul Tudor Jones, Stanley Druckenmiller, and Ray Dalio threw their weight behind bitcoin and other cryptocurrencies.

This breathed life back into the crypto space as big institutional money started trickling in. And crypto all of sudden had new buyers. This ended the Crypto Winter and sparked a massive rally. 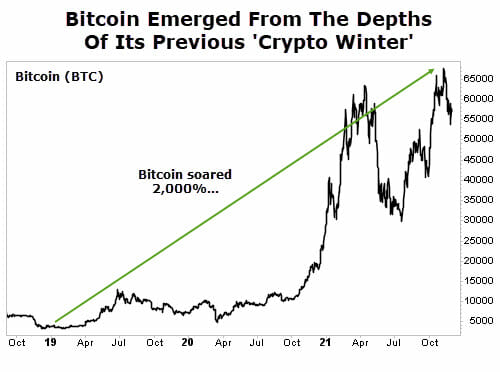 This current Crypto Winter won’t last over two years because, unlike last time when institutional investors remained on the sideline during the bust, we already have big money companies in the space with more coming on board.

Earlier this month, the biggest institutional player in the world announced it was entering the crypto space.

I’m talking about BlackRock, the world’s largest asset manager, with over $10 trillion under management.

The company announced a partnership with crypto exchange Coinbase. The reason is simple: BlackRock’s institutional clients badly want access to the crypto space… badly. By teaming up with Coinbase, they can provide their institutional investors an access point to crypto assets.

Think about this… despite all the volatility we’ve seen in crypto over the past nine months. Despite bitcoin being down 70% since its November 2021 high, Ethereum down 68%, and many other alt-coins down even more.

Three Arrows Capital, Celsius, and Voyager have blown up. Even an investigation into Coinbase by the SEC is underway… and yet BlackRock is still coming in.

I cannot overstate how bullish this is. The world’s largest asset manager wouldn’t risk its credibility if it didn’t believe bitcoin and crypto assets were here to stay.

Of course, this announcement does not mean the volatility is over. This space will continue to see volatility, just like every sector in the stock market goes through bouts of volatility.

But when a 1,000-pound gorilla like BlackRock steps into the room, we should pay attention.

We saw what happened last time the Crypto Winter came to an end. Bitcoin soared over 2,000%. Sure, it was over a few years, but I’m sure most people wouldn’t be upset with a 10-bagger in just a few years.

This news has provided light at the end of the dark tunnel. Since I began covering cryptocurrency over at Capital Wealth Letter, I’ve heard from many readers who wished they had the chance to enjoy the previous runup but didn’t take advantage. If you’re one of them, then I believe you’re getting a second chance…