Coal Is Making A Comeback — Here’s How To Profit…

Right now, all the talk is about green energy. But if you look underneath the surface, you might be surprised at what you find.

To paraphrase Mark Twain, the rumors of the death of coal are greatly exaggerated.

Now, if you thought that coal was on the outs (I did), it turns out that we are still quite reliant on this abundant natural resource. According to the U.S. Energy Information Administration, roughly 22% of U.S. electricity is generated by coal. Second only to natural gas. 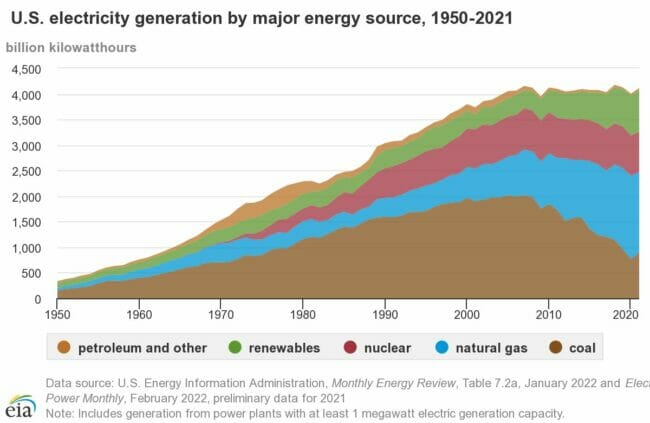 Coal plant closures have been delayed as energy supply fears have mounted. Or to put it more simply, the folks in charge realized that there weren’t enough alternatives to fill the gap that would be left.

Of course, the war in Ukraine has brought this into focus. So much so that even Germany is cranking its coal plants back up. The country was once the poster child in Europe for decarbonization. And while natural gas from Russia helped ensure the country (and Europe in general) had plenty of cheap energy to help subsidize those efforts, this is no longer the case.

My Pick For A Coal Renaissance

One company that’s bringing them that coal is Consol Energy (NYSE: CEIX).

Consol has been powering America since 1864. The company operates coal mines in the Northern Appalachian Basin.

Its flagship mine is the Pennsylvania Mining Complex, which can produce about 28.5 million tons of coal annually and comprises three large-scale underground mines.

The company also owns and operates Consol Marine Terminal, located in the port of Baltimore, and ships off roughly 15 million tons per year. It is only one of two coal export terminals on the Eastern Seaboard.

We can see that boost in coal exports in the company’s latest earnings report (released August 4, 2022). Net income from its marine terminal business jumped 51% year-over-year. Sure, that’s just one quarter, but the company is on track to generate more than $1.9 billion in revenue this year, representing a 47% improvement over 2021. 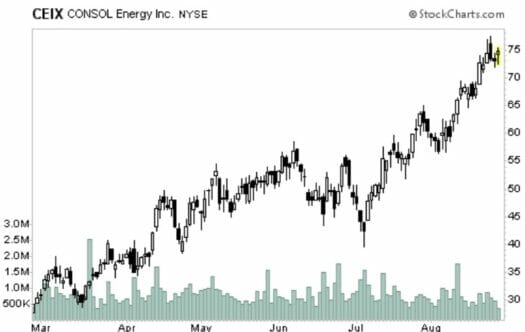 It seems coal is alive and well, for now at least. And Consol Energy is set to have its best year ever.

That has indeed translated over to the company’s surging stock price. As you can see, the stock is hitting new highs. As the war in Ukraine continues, many European countries will need to turn to coal as an energy source. And, of course, coal continues to be a major player in the U.S. power grid.

Also, like many other commodities, coal prices are at all-time highs, boosting profits for coal miners like Consol Energy.

Not too long ago, coal was the whipping boy for the push toward more renewable energy sources. While that sentiment has quietly subdued, if it rises again, that could put a damper on shares. Also, lower coal prices could crimp margins and profits.

But unless and until that happens, the coal trade is back on. Investors looking for a short to medium term trade with considerable upside should give Consol a look.

P.S. If you ever wished you had the chance to enjoy the previous runup in cryptocurrencies (but didn’t take advantage), I believe you’re about to get a second chance…