A Deeper Look At One Of My All-Time Favorite Businesses

When it comes to investing greats, nearly everyone is familiar with the names Benjamin Graham, the father of modern value investing, and Warren Buffett, considered one of the greatest investors of all time.

But I want to tell you about an investing great who is relatively unknown outside of value circles. His performance over the years was equally as good as Graham’s and Buffett’s, and the story of how he accumulated his wealth contains lessons that can benefit any investor.

In 1947, at the age of 38, Shelby Davis began investing in earnest with $50,000. Throughout his investing career, he amassed a $900 million fortune. Moreover, he invested in only a handful of stocks in the same industry.

It’s the same industry where Ben Graham and Warren Buffett made their fortunes.

That industry is insurance.

A Misunderstood (And Hated) Industry

Shelby Davis invested in insurance companies for similar reasons to Buffett: it’s a stodgy industry that changes slowly. This may not make it an excellent topic for cocktail parties, but it helps reduce some of the risks associated with investing. If a company doesn’t have to deal with new regulations or build a new innovative product to stay ahead of the competition, the company can focus on making money.

Nobody likes having to buy insurance. Insurance and insurance companies typically have a negative association in people’s minds. This is understandable, of course, because something bad has happened whenever you have to deal with them. It also doesn’t help that the industry can be a little hard to understand.

For better or worse, insurance has become a regular cost of living, like rent or electricity. You have to have it. So you pay the bill. And to top it off, for an insurance company to turn a profit, you have to have “wasted” your own money.

All this is to say that we’re not talking about anything exciting or “sexy” like an innovative tech company or cryptocurrencies. But I’m here to tell you that insurance is exactly where you should be investing.

Case in point: American Financial Group (NYSE: AFG). This is a P&C insurer we’ve held in our premium portfolio over at Capital Wealth Letter since August of 2020. And in that short time, we’ve made close to 200%. 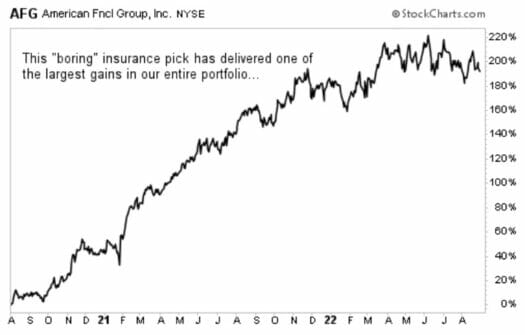 To understand why, let’s dive a little further into this beautiful business…

The Beautiful Secret Of Insurance…

Insurance companies can turn a profit through what’s called a float. A float is the premiums an insurer collects but has not yet paid out in claims. And this hoard of cash can grow large for insurance firms. For well-run ones, it’s also a powerful tool for generating profits. But this is where it can trip up many investors because float actually sits on the balance sheet as a liability, on the premise that the cash could be paid out as claims someday.

But here’s the kicker: in reality, the float is an asset. The premiums that an insurer collects, or float, are held in trust to pay future benefits or claims. So for accounting purposes, yes, it’s a liability since this money might have to be paid back at some unknown point in the future. But this isn’t just cash sitting idle in a bunker waiting to be deployed. This is money that can be invested, and any income and capital gain are kept by the insurance company.

For example, Buffett’s Berkshire Hathaway holds more than $148 billion in float — money that doesn’t belong to them but that they can invest for Berkshire’s benefit. This is how Buffett has managed to accrue such a large fortune.

Imagine if someone asked you to hold onto $148 billion, and you could keep any interest you earned off of it. Even at a measly 1%, that’s $1.48 billion you get to keep just for holding the $148 billion for a year. At 2%, that’s $2.96 billion. And we know great investors like Buffett will make more than 1% per year on their investable funds.

With most insurance companies, a good chunk of these funds is put into short-term treasuries and commercial paper, which have been returning next to nothing over the last eight years thanks to the low-interest rate environment. But that’s beginning to change. The Federal Reserve has slowly raised rates and plans to continue this year (and probably next year). Each time they bump up the interest rate, millions of dollars flow into the corporate coffers of insurance companies.

Of course, you can’t just go buy any insurance company. I’ve shared some of these tips before, but here are a few key things to look for when researching this space…

It’s worth noting that you can’t just assume an insurance company is generating an underwriting profit. Some will insure just about anything to keep premiums coming in the door. We don’t want to touch those stocks. That’s why you should look at the firm’s combined ratio, which measures insurance profitability. It is calculated as expenses and claim losses divided by premium collected. A combined ratio below 100 shows a company generating an underwriting profit. Above 100 means it’s operating at a loss.

Next, like many financial institutions, a key metric for insurance companies is the firm’s book value. This is the amount the company is worth if it is liquidated. The book value is often compared to the stock’s current market price or P/BV.

If the world’s greatest investors have built their fortunes on the backs of insurance companies, then it should be a staple for every portfolio.

As I’ve said before, when these fantastic businesses go on sale, it’s usually a good idea to scoop them up. Because more often than not, you’ll have the chance to gradually compound your wealth year after year.

Editor’s Note: In his latest report, Jimmy reveals an “off the radar” investment that’s being totally ignored by most analysts — despite sitting on one of the most disruptive technologies we’ve seen in years…

We’re talking about a total revolution that could change the face of American transportation forever. It may sound like science fiction… but it’s coming sooner than you think.

Go here for all the details – NOW.